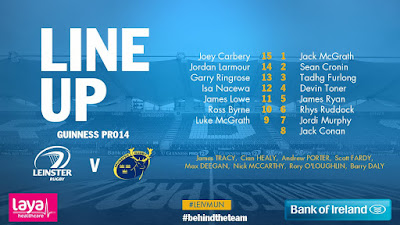 My point is, while the fact that it's a major trophy, it's Munster and it's at the RDS provide more than enough motivation for us already, our failure to complete the 'major double' adds a little cherry on top.

Sure, it has only been a week of celebration since that fourth star was won, and on top of that the squad has suffered setbacks on the injury front, but this is still very much a 23 that can get the job done.

That said, the Munster side ain't too shabby either, and you can bet they at least match us on the motivation front.  Simon Zebo would love nothing better than to sign off with a trophy, Andrew Conway would't mind reminding the RDS crowd what they're missing and as for the likes of Murray, Earlsy, POM & CJ - their A game comes as standard.

Basically Leinster's chances are linked to how we can regather ourselves from Bilbao.   The loss of Henshaw from the centre is a blow, but it wasn't so long ago that we were assuming we'd be without him anyway at this stage and that Isa and Garry were our best alternative.

If our Captain Fantastic is fully fit, he'll be keen to make his RDS farewell a special one and he has certainly shown this season he can do well in the 12 jumper.

Of course we can't ignore Johnny Sexton's absence but what an opportunity for Ross Byrne - it will be vitally important for him to go for the right options because our guests will be primed and ready to pounce on any mistake.

And speaking of which, I harped on Munster's back three already, but everyone knows the game breaking abilities of Joey Carbery, James Lowe and Jordan Larmour...perhaps they haven't shown them much in recent weeks for various reasons but there is certainly no better time for them to remind us.

If I use my usual formula for making a prediction, namely us being a bit below par and our opposition playing to their full potential, then I'd be forecasting another home semifinal disappointment for Leinster.  However, I think we'll be able to raise our game just enough to stay ahead...I say this mostly because of our bench in the forwards - Healy, Porter, Fardy and Deegan are just the kind of names you want to bring a lead home in the final 20 so if we can get that, we should prevail.  The bookies have us by 8, I'm saying 4-6.

One thing is for sure...my expectation for this one is no less than any of the Grand Slam or Fourth Star contests...I hope to see you there and be sure to max out on the blue and make yourselves heard!  JLP