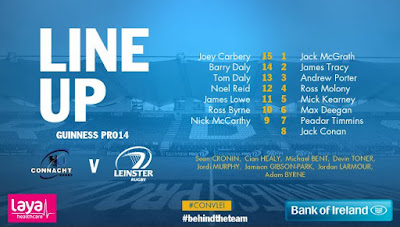 So...as the first regular season of the new conference format draws to a close, how are we feeling about it?

Mostly I'm positive.  Two separate races for three spots each was always going to be more interesting than one for just four, the South African teams added a new dimension plus it looks like one is set for the playoffs at the first attempt, and the extra playoff game for European qualification will be a welcome bonus too.

A couple of things I might quibble over...the first is something I've harped on a lot over the years, namely what I call 'neutral refs' - when teams are facing each other from different unions, at least the man in the middle should come from a third.  It's not that I believe officials are biased, it's just that in a league spanning five unions they shouldn't have to contend with even the merest suggestion of it IMO.

But another bugbear presents itself this weekend, which has the 21st and final round of matches.  All seven contests are 'derbies' and I think this could create even more conflicts of interests than the talking point about the referees I mention above.

Mathematically, none of the top three spots in Conference B are nailed down as yet, and all four clubs in contention for them are facing opposition that has virtually nothing to play for (unless you count Connacht trying to avoid finishing in last place).

While I know it's highly unlikely that anyone involved with Connacht, Dragons, Glasgow or Munster would just roll over and let the other team win, we can't ignore that playoffs are extra matches in the season so where they take place offers additional revenue for the host union in question.  All I'm saying is that in future it will probably be better, for at very least appearances' sake, that the final round comprises as many cross-union matchups as possible.

One thing's for sure...if the Scarlets somehow manage to catch Leinster in the 'points difference' column on Saturday it would look 'well dodgy'!!!  To finish first they'd need their margin of victory over the Dragons, when added to Connacht's over Leinster [once that's more than 7 of course], to total a minimum of 127!

It's probably about time I made this piece look more like a preview, and one thing that pretty much guarantees Connacht will be up for the match at the Sportsgrounds is the fact that it is the final appearance for their long-time servant John Muldoon.  Andrew Browne is also saying farewell but I'm sure he has no problem with the #thanksmul party taking centre stage.

What a career he has had - it's a shame there haven't been more Ireland caps but to tog out over 300 times for your province of birth including captaincy in an amazing championship victory is no mean feat to say the very least.  And what better way for him to sign off than to turn over a Leinster team that has recently shown itself vulnerable when there are bigger contests down the line?

Actually, if you don't mind, I'm going to take another little brief detour, addressing the mini-kerfuffle of late surrounding Joey Carbery and Ross Byrne, both of whom start on Saturday.

For me it's very simple...when a player moves from one club to another in any sport, it's fine by me so long as three parties are satisfied...the two organisations and of course the player him or herself.  In Irish Rugby there is an added dimension to all of this, namely the IRFU and what went wrong here wasn't the suggestion itself, rather the optics surrounding it.

Surely it's not that difficult to keep the negotiations under wraps so that if the move doesn't happen, we're none the wiser and if it does, we can be confident that everyone is happy with the switch.  That said, establishing circles of trust isn't made easy by the involvement of agents.  And on the timing issue...the week leading up to a European semifinal?  Really???

Anyway, when it comes to Leinster players moving on, just take a look at this weekend's the lineups for the other three provinces and you will see several players that made their debuts in D4.  There's more talent coming out of our province these days so it's inevitable that decisions will have to be made along the line, and when the likes of Tadhg Beirne and John Cooney do well at their new clubs, it should be hailed as a success not a mistake.  But if the two young backs in question want to stay and fight it out to be Sexton's understudy, they should be allowed to do so.

OK, sorry again for the digression...I suppose I keep doing it because I have a feeling we might come out second best in this match.  It's the centre pairing that worries me most - it's great to see Tom Daly back in action but his lack of game time might hamper the chances for himself and Noel Reid to be effective, particularly without the ball.

We do have a strong bench but with Bilbao in mind the hope would be that we won't be needing it for the final quarter...I fear we might.  With a fired up pack and a pacy back three the home side could well be able to put some early points on the board from which we can't recover.

The bookies think we'll win by 4.  I agree with the margin, but not the victors.  I definitely think Leinster CAN win, but I'd have to challenge them to put recent outings in this league against Ospreys and Treviso behind them to do so.  As always on the rare occasions I predict against the boys in blue, I'll be more than happy to be proven wrong.  JLP