Nacewa & Strauss to Retire as Cullen Confirms List of Departees 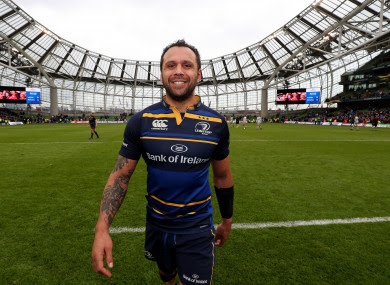 Six Departures in Total from Leinster Rugby This Summer

Ahead of the Leinster Rugby Awards Ball at the InterContinental Dublin this evening, Leinster Rugby Head Coach Leo Cullen confirmed that Leinster Captain Isa Nacewa and hooker Richardt Strauss will be retiring at the end of the current season.

Nacewa (35), who has been capped 182 times for Leinster since his debut in September 2008 is bringing the curtain down on an illustrious career in Leinster blue which to date includes three Heineken Cup medals, a Challenge Cup medal and a PRO12 title.

Strauss (32), who made his debut in February 2010, has also had a profound impact on the club winning two Heineken Cups, a Challenge Cup and two PRO12 titles in his time with Leinster and has represented Ireland on 17 occasions including three appearances at the 2015 Rugby World Cup.

"It is hard to articulate the impact that both Isa and Richardt have had on this club since their arrival.

"Warriors on the pitch and wonderful men off it, they are, in my opinion, two of the best players to have ever worn the blue jersey. Their impact on this group of players will be felt for years to come.

"We will also say goodbye this evening to Peadar and Cathal who have come through the Leinster pathway and are two great examples of that route and the success that can be had if you apply yourself in the right way. I wish them all the very best of luck in their future endeavours."

Cullen was looking forward to giving all six players the send-off they deserved.

"It’s a difficult one because obviously you don’t want to get distracted with so much rugby still left to be played this season but it is important that we formally recognise the impact that these six players have had on the club.

"I think this evening at the Awards Ball in front of their team mates, their family and close friends is the perfect time to do that but once that is done, I know they will want everyone to focus on finishing the season as strongly as possible and I think for them and for the rest of us there is no better way of finishing out the season or your time at the club than that."