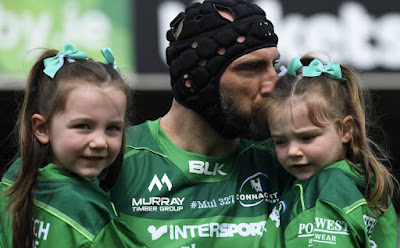 John Muldoon had the perfect sendoff and it was an excellent way for him and the Connacht fans to end what had been a mostly disappointing season.  Leinster weren't at the Galway races literally from the opening kickoff and the outcome is no less than either team deserved for what they put into the eighty minutes.

Right, that's my writeup done, see you after Bilbao!  JLP

What's that?  You were expecting more?  Oh, alright then.  But to be fair, although I predicted a Connacht win in my preview, I was also expecting a lot more from Leinster as it happens.

Look...since the Six Nations I have said on these pages that the 2017/18 campaign won't be remembered for depressing displays like those against Connacht and Benetton any more than they will be for big wins against Southern Kings and Zebre.  Whatever happens this was a Grand Slam season and if Leinster can stick to the script in Europe as they have done in their eight matches so far, there could well be a fourth star tacked on to those memories.

When we look to analyze this particular match, that context has to be understood.  So rather than put myself through the torture of rewatching it, I chose instead to harp on a few associated talking points but also covering more general topics.

Now while I say I didn't watch the full match a second time for note-taking purposes, I had no problem sitting through the highlights because there was some superb play from the home side that deserves loads of credit, especially when I manage to buy into the whole 'Well we won't defend like that against Racing' concept.

In many ways the Westerners hit us in a way we'd have expected the Scarlets to.  All they needed was a sniff of a chance and all fifteen men in green were primed and ready to take full advantage.

Of course Muldoon was the focus of attention but for me it was hooker Shane Delahunt [voted man of the match for things like his awesome offload that set up one try] and Bundee Aki who stood out most of all.  With this display from the centre plus all he did during the Six Nations I don't know how he can be left out of the starting lineup of the first test in Brisbane.

If they can carry this kind of form into next season there is no doubt they'll be back at the competitive end of this league sooner rather than later and I wish them all the best.

I saw the phrase 'we have bigger fish to fry' bandied about quite a bit from Leinster fans on social media after the match...that's all well and good but those fish are harder to fry when a supposedly smaller one has just hopped out of the pan and whacked you over the head with it!

As this was mainly a team failure I don't want to single any one player out but I will mention Tom Daly only because his dropping the opening kickoff, which led to a series of Connacht phases that resulted in the opening try by Adeolokun, meant that we were only really in this contest for a few seconds.

Much has been said about the fact that we have used 54 players this season, but the fact remains that we need 46 to play in finals on May 12 so you would have to expect to see a lot more 'hands put up' by Leinster on the day.

However, I will push back a little bit on our display.  Some are saying there was no fight...I respectfully disagree.  Particularly in the second half there were a number of individuals on the park who were doing what they could to dig out some kind of consolation but it was just 'one of those afternoons' when it wasn't happening.

Probably the biggest talking point of the match, thus it deserves it's own heading.

Before the England v Ireland match I compared the Grand Slam to a 'no-hitter' in baseball and if you don't mind I'd like to bring in another bit of jargon from America's national pastime, namely 'hot-dogging'.

You might already know the term...it describes someone over-celebrating a positive outcome right in front of the opposition and while it doesn't only apply to baseball (Chris Ashton springs to mind), it is arguably the most offensive when someone hits a home run and proceeds to strut around the bases making gestures in full view of the infielders...not a good look at any level of any sport.

Now when I first saw John Muldoon was going to take the conversion for Caolin Blade's try under the posts, I honestly wasn't bothered.  'Seems about right and a good way to help the celebration of a magnificent career' - that's pretty much all I was thinking as he took the kick.

Then I noticed Jordan Larmour actually trying to charge it down, while Cian Healy was disrespecting the law requiring the opposition to stay behind the try line, and I thought "Well that's bound to bring about some outrage on the twitter machine!", which sure enough it did.

It won't surprise regular readers that I now see both sides quite clearly.  What Muldoon did hasn't happened often, but there is precedent, like retiring Namibian prop Johnny Redelinghuys in the pool stages of the 2015 World Cup.

But most people who have played sport will know what it's like to be on the receiving end of 'hot-dogging', and technically, this qualifies.  We're so far ahead of you we don't really need these two points.  To be honest, if at least a few Leinster players weren't a bit miffed in the heat of battle, I'd be disappointed.

So how do we avoid this in future?  One suggestion - the captain goes to his counterpart and says - 'Mind if we do this?', then the other says 'No problem' before instructing his players to respect the kick and afterwards it can all be explained to the press that everyone was happy.

This talking point bleeds a bit into my next one...

As much as I try to avoid using the 'what if it was the other way around' argument, in this case I firmly believe that anyone who found their own team in Leinster's situation would have showed some understanding for what Healy and Larmour did, and I'd even go a bit further and argue that it's because it's Leinster that the empathy can't be found.

What I'm talking about here is something I call 'Leinster-freude' and I've been looking for a way to bring it up for a while now.  Basically I mean a particular dislike towards the boys in blue from fans of other provinces that goes beyond 'friendly rivalry'.  It's not really a 'big deal', it's just something I have observed following Irish rugby opinions for several years.

Of course it is a minority that displays it, and I'm certainly not suggesting for a moment that all Leinster fans show love for their cousins either.  But let's just say that if you took a poll among Irish rugby supporters asking them to rank the four provinces, it would be a pretty safe bet that Leinster would finish last.

Now if you're thinking 'Awww, poor persecuted Leinster fans, my heart bleeds', then you've fallen into a trap of sorts, because to me, THAT is a perfect example of Leinster-freude in itself.

Luckily in the now-approaching ten years I have run this site I have only gotten a small amount of really bad feedback from 'haters' and 'trolls' and only once have I decided to ban someone from the Facebook page.   But I'm not just talking about the abuse here, it's more of a general perception.

The point I want to make about this phenomenon is that it actually isn't a bad thing, because although there might be a bit of traditional 'capital city dislike' about it, for the most part it stems from the fact that Leinster have had the most success over the years, which is a positive for us as far as I'm concerned.  We could also argue that towards the end of the 'noughties' there was a similar feeling towards Munster in their European heyday?

And to be honest, I WANT to see a bit of this niggle between the provinces.  Obviously there's a line where it should stop, and football has shown what it's like to go way over it, but if you took banter and passion out of fandom completely, it would suck all the fun out of following sports.

Our one and only try on Saturday was a bit fortunate, but the fact that it was finished by Barry Daly means, unless the Pro14 site's stats page is yet to be updated and I have missed a few tries from others, that he ends the regular season as the league's leading try scorer, which is a notable achievement in itself.

Also Ross Byrne tops the list of conversions, and throughout the other categories there are those who began at Leinster like John Cooney, Tom Farrell and Tadhg Beirne and this, I contend anyway, is a positive sign despite those who might wonder if they should have ever gone.

Last but not least in this silver linings category, let us not forget that despite this disappointing scoreline, we still finished first in Conference B, which gives us not only a home semifinal but also a crucial week off ahead of Bilbao.

All the Leinster players and coaches can do is try to put Saturday behind them, so we as fans must do the same.  Superlatives like 'that was the worst performance ever' really serve no purpose over the next two weeks.  We need to remember that on each of our eight European outings we have been match ready, and assuming we'll be treating the Pro14 playoffs to be of an equal standard, there is definitely much to be hopeful about for the weeks ahead.

But I can harp on those future matches another day; time to go back to the start of the piece and leave the spotlight where it truly belongs - on Connacht's own Captain Fantastic.  What an amazing playing career he has had, and even if he only brings half his ability and determination into his defensive coaching role at Bristol, the rest of the Premiership had better watch out.  Thanks Mul! JLP