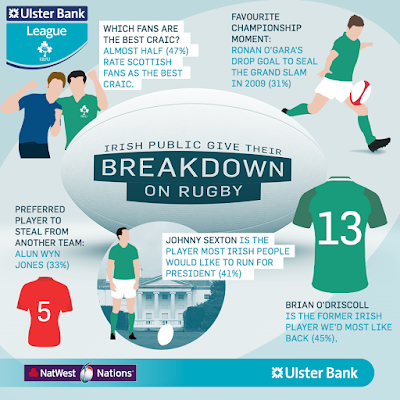 Rivalry is sure to be high on the pitch this weekend given the significance of Ireland’s crunch NatWest 6 Nations tie with Scotland. However, this is not the case off the pitch as almost half (47%) of Irish adults believe that Scottish fans are the best craic on a night out.  As Ireland’s quest for Grand Slam glory continues to gather pace, Ulster Bank, proud sponsors of the Ulster Bank League, conducted a national survey ahead of Saturday’s crucial tie which revealed some interesting findings.

It’s no surprise given his heroics in Ireland’s opening match of the Championship in Paris, Johnny Sexton was top choice (59%) when it comes to stepping up for a match-winning drop goal.  Ronan O’Gara came in a close second (36%) but topped the poll in his native province of Munster. Not to be completely overshadowed by Sexton, O’Gara did claim Ireland’s most historic Championship moment (31%) for his infamous drop goal in Cardiff, leading to Ireland’s Grand Slam victory in 2009. Interestingly, the momentous meeting of Ireland and England in Croke Park in 2007 was top among 49% of Irish adults aged 55 and over.

Despite the Irish squad looking stronger than ever, 33% of respondents claimed they would like Wales captain Alun Wyn Jones to join the Irish squad. Ireland's defensive coach Andy Farrell’s son Owen Farrell comes in a close second (23%) and Scottish full back Stuart Hogg claiming third place (20%). When it comes to former Irish greats, Brian O’Driscoll (45%) took top spot among those surveyed to don the Irish jersey once again with Munster duo Paul O’Connell (32%) and Ronan O’Gara (15%) claiming second and third spots respectively.

O’Driscoll’s popularity shows no sign of slowing down as he also claimed the coveted titled of Ireland’s leading TV pundit according to 30% of those surveyed.

When asked about which current Irish rugby player the nation would like to see on Dancing with the Stars, Johnny Sexton (27%) scored a perfect 10 with 27% of the vote followed closely by fellow teammates Rob Kearney (23%) and Conor Murray (17%). Johnny Sexton’s appeal to Irish people shows no sign of waning anytime soon as 41% of people questioned would like to see him take up residency in Áras an Uachtarain. This could make for one of Ireland’s most interesting presidential elections which is due to take place later this year.

Speaking on the results, Carol McMahon, Head of Business Marketing and Sponsorship at Ulster Bank, said “It has been a really thrilling Championship to date as Ireland continue on their winning streak in their quest for a Grand Slam. Our survey revealed some very interesting results and let’s hope Johnny Sexton gets the opportunity to give us another memorable moment this weekend similar to his historic drop goal in Paris! As proud sponsors of the Ulster Bank League and supporting grassroots rugby in Ireland, we were delighted to see the Ulster Bank league selection beat their Scottish counterpoints recently and we hope Joe Schmidt and his team follow suit this weekend. On behalf of Ulster Bank, I would like to wish the lads the very best of luck for the remaining Championship games and we urge fans to get behind the team!”

For more information on the Ulster Bank League follow @UlsterBankRugby and join the conversation using #UBL or visit www.facebook.com/UlsterBankRugby.