Six Nations Team of the Tournament by Mark Jackson 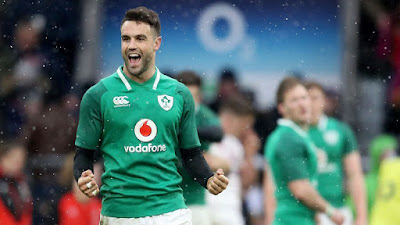 St.Patrick's Day 2018 will live long in the memory. Ireland's control and poise saw them home in Twickenham on a scoreboard which flattered the hosts. Scotland eke out a win in Rome (gotta feel for the Italians) and Wales were "lucky" Trinh-Duc was allowed to stay on so long.

15. Matteo Minozzi (ITA). A bright future in store for the Italian full back. 4 tries is not to be sniffed at and always beat first defender. Excellent footwork.

14. Keith Earls (IRE). From the cross field catch in Paris to keep the 41phases going to the ankle tap in Twickenham , Earls was on form from start to unfortunate finish.

13. Garry Ringrose (IRE). Huw Jones had an outstanding outing in the Calcutta Cup match but Ringrose's marshalling of him and his own influential attacking game see him in 13 shirt .

12. Hadleigh Parkes (WAL). Solid as a rock in defence and knitted the more adventurous Welsh together. Bundee Aki also unlucky to miss out

9. Conor Murray (IRE) My personal player of the tournament. All around game at world class levels

7. Dan Leavy (IRE) No serious mention of Sean O'Brien's absence is down to his Leinster colleague's emergence on the international scene. An excellent series at the breakdown.

6.  Yacouba Camara (FRA) Aaron Shingler and John Barclay had their moments but the athletic Frenchman takes the blindside birth. Great lineout forward and a menace ball in hand

5. Johnny Gray (SCO) His most consistent series of games at this level. A very high workrate and tackle count across all outings, hugely important to Scottish efforts.

3. Tadhg Furlong (IRE) The measuring stick for all props.Soft hands on show to add to his power at the scrum and ball carrying.

2. Guilhem Guirardo (FRA) Unfortunate not to play all 5 games  A warrior for France over the past few seasons. Excellent throughout first 4 games.

1. Cian Healy (IRE) Has been around the block and back again with a wallop. In his prime. Controlled aggression throughout.

Want to see your own rugby opinions on the web?
Click "Write for us" in the sidebar to find out how.
at March 20, 2018