Six Nations Team of Round Four by Mark Jackson 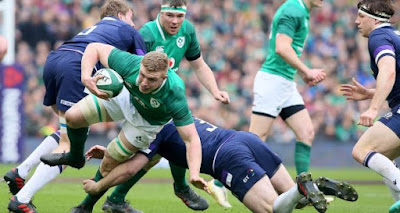 Plenty left to play for , especially Ireland in round 5 but money talks too and the money on offer is substantial depending on where the teams finish. A controlled, patient, clinical performance from Ireland saw them home comfortably on the scoreboard , if not always on the pitch itself. France in Paris played better but still no world beaters and England still not getting how important the breakdown is. Wales tried some new blood and scored some good tries but Italy never stopped trying and have unearthed two or three new players capable of mixing it on the world stage (they just need a handful more unfortunately to be truly competitive). Below is the pick of the performances from Round 4 , where 8 Irishmen , 3 French , 3 Welsh and 1 Scot make up the selection .

15. Rob Kearney (IRE) - His best outing in green in a long time , still not the most subtle of players but controlled the air above D4 and ran hard and straight and powerfully for a lot of metres giving his forwards good targets. Minozzi continues to impress for Conor O'Shea's men.

14. George North (WAL) - Approaching his best again , looks fitter than in a long time , the move back to the Valleys will benefit all concerned with a player who has been around forever it seems , yet still only 25.

13. Garry Ringrose (IRE) - At about midnight on Saturday whilst in his room , a few euro, a couple of receipts and Huw Jones fell out of Ringrose's pocket . Some return from an exciting talent , always beat his first defender and controlled the 13 channel with aplomb , the depth Ireland currently have in the centre is frightening. Basteraud has a great game too but Ringrose takes the outside centre slot.

12. Hadleigh Parkes (WAL) - Nothing flash does his basics very well , as one would expect of a kiwi, has brought his pro14 form onto the international stage seamlessly.

11. Jacob Stockdale (IRE) - 10 tries in 8 outings says it all , still a work in progress but some strike rate.

10. Jonathan Sexton (IRE) - Pulled the strings at the Aviva , aggression in the tackle and in contact too , a world class player.

9. Maxime Machenaud (FRA) - Kicked his goals and kept his forwards coming onto the ball with pace, Cono Murray has another strong performance but Machenaud nicks the 9 shirt.

8. Taulupe Falatau (WAL) - A solid rather than spectacular performance from the Welsh skipper , no no.8 really has a barnstormer so the dragon takes the jersey with some help from his hit on Tommy Allen.

7. Dan Leavy (IRE) - Another performance where in this case the stats don't lie , I reckon a firm favourite of Schmidt's now , his tackle count , high carries and ruck work are vital to Ireland's patient possession game.

6. Yacouba Camara (FRA) - A thorn in the English side , always a threat ball in hand , got across the gainline at will carrying plenty of white jerseys with him and a nuisance at lineout time , a great athletic performance , need to see it more often.

5. Jonny Gray (SC0) - Sebastian Vahaamahina had a big game but still too ill disciplined , Cory Hill also carried well in Cardiff but Gray had an outstanding game especially in defence and lineout in what was a game where his pack were second best more often than not.

4. James Ryan (IRE) - Devin Toner has his best game for a while but was still 2nd best to the outstanding Ryan. For me the most consistent 2nd row in the 6 Nations.

3. Tadhg Furlong (IRE) -  Tough enough shift at scrum time but a great return from the Wexford man , the standard bearer for props. Does it all.

2. Guilhem Guirado (FRA) - Never fails to impress, very unfrench like in his very high workrate , a great leader and his all around game allied with strong set piece has him head n shoulders above the hookers in the northern hemisphere for me.

1. Cian Healy (IRE) - The HIA incident was not nice to look at , be it a stinger or not but Healy keeps rolling out quality games at the moment. His first half performance was top notch , carrying excellently and intelligently with good footwork to go along with his serious upper body strength .

Want to see your own rugby opinions on the web?
Click "Write for us" in the sidebar to find out how.
at March 13, 2018