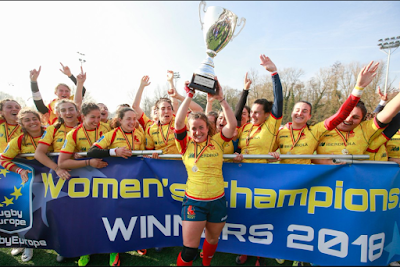 Spain won the 2018 Rugby Europe Women’s XV Championship.  #the tournament was held over 5 days in 2 venues in Belgium.  There were two semi-finals, a third-place play-off, and a final.

The final took place at Stade du Heysel in Brussels.  Spain beat Netherlands 40 – 7. Tries from Margarita Rodriguez and Anna Fernandez de Corres were converted by Maria Ahis.  Netherlands got one back through Wopke van Leeuwen, Lorraine Laros converted. Spain led 19 – 7 at half time thanls to a third try from Echeberria.  In the second half Laura Delgado got another for Spain. Ahis converted, kicked two penalties, then converted Carlota Melizs try.

Spain remain 10th in the World Rankings, 0.63 points behind Italy and 3.78 ahead of Samoa.  Netherlands remain 14th with a slightly improved score of 64.21.  Germany overtake Russia, moving up to 19th, while Belgium move down to 22nd behind Trinidad & Tobago.
Ciarán Duffy (@TheVoiceDepth) is a Leinster supporter and self-proclaimed ‘big cheese’ of Post To Post (@PostToPostSport).   He’ll write about anything rugby under the condition he gets to take it too seriously.
*****
Want to see your own rugby opinions on the web?
Click "Write for us" in the sidebar to find out how.
at March 08, 2018