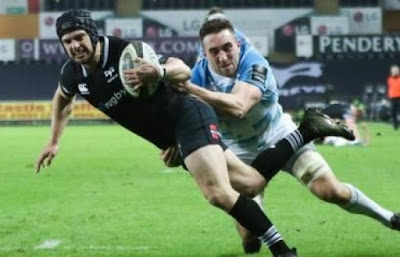 O what a week it had been, eh?

Especially after the one that had gone before...days spent anxiously waiting for the match in Twickenham to finally get underway and then a couple of hours later we were wondering what all the worry was for as Irish fans celebrated the highest honour the European rugby season has to offer.

Then the weather tried to snow on our parade the following day but we were having none of it.  The general warmth and good feeling across the island guaranteed it was never going to last and the celebrations continued on into the bank holiday that followed.

Here at Harpin Manor we had even more reason to cheer, as our writeup of the Grand Slam match positively smashed the previous record for hits that had been set by the win over the Springboks back in November.  And Wednesday happened to be my birthday into the bargain, so the niceties followed right through into this weekend...smiles all round.

Now of course it was time to turn the spotlight from the Six Nations back onto the Pro 14, and things also looked rosy there.  Leinster were sitting handily atop Conference B with a three-point lead plus a sizeable advantage in the points difference column, before our southern cousins did us a big favour by denying the Scarlets any match points at Thomond Park on Saturday evening.

Our own Round 18 fixture against the Ospreys wasn't scheduled to be on Irish TV - some are able to tune in to S4C but not me and being unable to go out I thought I'd have to follow the action via twitter, until shortly before kickoff I discovered a perfect stream on Facebook (major hat-tip to regular Harpin reader Noel Cuddy) so I elected to forgive Mark Zuckerberg his company's misdoings [for a couple of hours anyway] as I Chromecast it onto my telly.

The first ten minutes of the match made me think the good times were just going to keep on rolling.  After a burst up the wing by Rory O'Loughlin we go deep into the Welsh region's 22 before we win a penalty directly in front, one that Ross Byrne converts to give us a handy early advantage, and the next time the home side try to come back at us, our defence pushes them back over 13 phases before forcing a knock on.

I was thinking - what a time to be a Leinster & Ireland rugby fan!  I was on such a high that even my inner George Hook was keeping quiet!  That should have been my warning sign...

The downward curve began when those pesky Ospreys challenged us to a bout of kick tennis, and it was one to which we could not rise.  Some of ours found the mark, it's true, but not all and theirs were pretty much spot on.  And when they varied it to a high kick which was caught by Dan Biggar at half way, they were well poised to use the front foot ball and as Justin Tipuric found space in the wide channel he tempted McFadden off his wing which eventually allowed Dan Evans to go over in the corner.

From then on, despite the fact that we could have salvaged a point right up to the closing stages, things just went from bad to worse, to much, much worse for us.   It's not the first time a Welsh region has ambushed us while were high on success, and I doubt it will be the last.

It was a really nasty game of rugby to watch all round.  I don't mean that in terms of foul play or anything, it was just after my emotions had gone from anxiety to euphoria in eighty minutes just a week before, this was exactly the opposite.

And then of course I had to make myself watch it all again to write this piece!  Urgh.  Although when I did, the targets for my frustration changed quite a bit.

I presumed I'd be directing my negativity towards our defence more than anything else...a safe enough assumption you would have thought given it was our second highest concession of points this season after we played the Cheetahs.

But on second look, while we definitely had some system errors in our defence, like when first McFadden and then Dave Kearney got drawn off the wing leading to Dan Evans' early brace of tries, we actually weren't doing all THAT badly on the tackling front especially when you consider we had to make three changes to our backline before halftime.

I actually wouldn't feel so badly about the concession of 32 points if we had managed more on our side of the scoreboard, but I reckon we should consider ourselves lucky to have gotten as many as 18 - we were way below par with the ball.

Of course you have to give the home side credit for their defensive work but for us to get caught in choke tackles several times, have the ball pilfered by Alun Wyn Jones at the breakdown with all the time in the world, concede infuriating penalties in the home 22 having worked a good territory position...it wasn't Ross Byrne's best outing but it would be unfair to single him out - we just were not showing the levels of accuracy and cohesion across the fifteen on the park required for a team that's chasing two pieces of silverware.

Not surprisingly many are taking aim at the referee but I'm not so sure...regular readers will know my thoughts on the conflict of interests brought about by having officials from the unions involved so no need to go into all of that again...just take it that I believe they have a 'pass' from me until this league is in a position to address that issue once and for all.

Besides, both teams were scratching their heads at multiple calls by John Lacey and his crew, although I was surprised by the amount of fans who didn't know Barry Daly's try at the end of the first half was legitimate.

And I'm not altogether sure if this result can be tagged as a 'blip' either...if we look back at our performances since we clinched a perfect record in our European pool, we only have a mauling of the Southern Kings to look at for anything overly positive.  Defeat in Edinburgh plus three match points lost to the Scarlets thanks to late penalties could be added to this result to make a narrative if you were that way inclined.

But the best way to whittle down this result to its simplest explanation is to say that the Ospreys wanted the match points more and deservedly got them.

All of this means, of course, that it's up to Leo, Stuart and co to work on the lads during the week to put this all in Leinster's rearview mirror.  And for a squad that prides itself on having embarrassing depth, between injuries, forced retirement and eligibility rules we seem to have some interesting decisions to make when it comes to selecting a matchday 23 for Easter Sunday.

Take full-back for starters - we can hardly leave out Rob, yet with Sexton available this means unless we get creative there's no starting place for Joey Carbery.  And imagine the extra dimension that Jordan Larmour being fit would have added?

Our centre pairing picks itself - Isa and Garry.  I'd almost go as far as to say that the more time they can stay on the park together for the remainder of the campaign, the more our chances of success.

But with our skipper needed there, James Lowe likely to miss out again on nationality grounds, both Larmour and Dave K now injured and Adam Byrne only back, we may be left with the starting wingers from Swansea for the Aviva [Ferg and Daly], which wouldn't be a disaster although the defensive coverage would have to improve.

The selection headaches become more the 'good kind' in the pack, especially if both Sean O'Brien and Rhys Ruddock are able to return.  You'd have to be wary about the ability of either to start such a massive quarterfinal, but if, as also reported today, Jack Conan isn't in the frame, we may have no choice unless we go with Jordi at 8.

Here's one call that might be from 'left field', and I wonder if it's 'allowed'...although Scott Fardy was officially signed as a lock, with both Ryan and Toner available I'm hoping we could switch the Wallaby to his original blindside flanker role for this one.  This would allow us to put two back rowers on the bench for the final quarter as well as bringing us to maximum competitiveness at lineout time.

As you can see I can't put together a definitive 23 without brackets and forward slashes just now, but I'd much rather think about this than what happened in Swansea!  So feel free to peruse and/or disagree at your leisure...

[UPDATE - Reports from Leinster's training camp suggest that if Nick McCarthy is fit he could feature on Leinster's bench, thus freeing up Lowe to take a spot on the wing with JGP missing out.  Like I say, there is much for them to ponder!]

Returning to our Pro14 campaign to complete what is meant to be a match writeup, next we have both Zebre and Treviso at the RDS while the Scarlets play Glasgow at home and Embra away, both on form.   We can't take the Italians for granted but if we want to finish first in the conference we'd want a maximum return from those matches in the hope that we won't need anything from Connacht in the final round.

So as you can see, the road ahead for us is anything but easy.  Will Saturday night be seen as a wakeup call or a sign of things to come for Leinster?  We'll have to wait and see, but one thing's for sure, we'll have to pack away the Six Nations bunting for a while and get fully behind the boys and blue for the next couple of months.  Roll on Easter weekend, I can't wait.  JLP