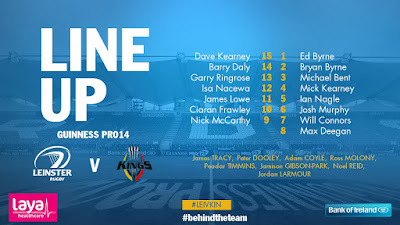 So if you're wondering what I'm doing this evening I'll be sitting in the press box at the RDS watching Leinster play Southern Kings live, with Ireland v Wales Under 20s on my laptop and France v Italy on my phone.  Munster v Glasgow will have to let me know what's happening by way of 'dings' from my Flashscore app.

I harp on European rugby's crazy calendar a lot I know, but when it gets this ridiculous I have no problem doing it again.  It's not just that there's too much good rugby on at the same time; even having them the same weekend makes it difficult for the hungry viewing public to keep up.  If you'll allow me to quote my own writeup from the last time Leinster played these same Southern Kings...

Do we get sellout crowds at Ireland's women's and Under-20 Six Nations matches when we schedule them on the same weekends as the senior men's team? ... There does exist a saturation point at which fans are prepared to part with not only their cash, but almost more importantly, their time.

Right enough about that - now to tonight's match at the RDS.  In recent weeks Italian clubs in the Pro14 have done really well - both won away last weekend while Treviso are on a five-game winning streak. Long may that continue [or at least until they both visit D4 in April] but we all remember when they along with the now-defunct Aironi were considered whipping boys of the league.

Even with that assumption, I always approached my previews to matches against them with caution for fear of tempting the rugby gods.  Such fear does not exist tonight.

When we played the Port Elizabeth-based franchise back in September it was just our third match of the season so their standing in the league was far from clear.  Now they have played fifteen times and their record speaks for itself....fifteen defeats, only twice have they come within seven points of their opponents and on average they concede a whopping forty points per match.

Nothing in sports is a done deal based on previous record...trust a Spurs fan who recently saw his team draw 2-2 with a recent Champions League finalist AND the bottom club in the third tier of English football withing a matter of days.  Yet for tonight's match, I have to say it's imperative that Leinster at least beat the bookies' spread of 35pts and actually I'd go as far as to say they should smash it, especially with so many proven try-scorers like Lowe, Daly and Deegan lining out.

Such a result is important because it will heap a mountain of pressure on the Scarlets who host Ulster tomorrow night ahead of our own trip to Llanelli next week, plus we need it ourselves after a bit of a shaky start to the Six Nations block, at least by the standards we had set ourselves in the season up to the end of January.

And do we have a lineup capable of posting such an eye-catching margin?  Well first look at who is playing centre.  It is with an almost perfect mixture of joy and trepidation that I see the names Nacewa and Ringrose on the team sheet.  Joy because they definitely need game time together ahead of Saracens and Garry may well not be available again before then.  The fear of course is that either may get injured so you can be sure as I'm indulging in my feast of rugby tonight I will have fingers, eyes and toes all crossed for them in particular.

But there's another interesting name in our backline tonight - Ciarán Frawley has impressed for Leinster A and in his senior debut last weekend he also acquitted himself well.  Now it goes to the next level, probably knowing all week he'll be wearing the ten jersey so we wish him all the best [as well as my personal apologies for heaping such pressure to produce a massive winning margin!].

In the pack, this week the Great Leinster Back Row One-Arm Bandit has thrown up a trio of Josh Murphy, Will Connors and Max Deegan.  Josh and Max have done extremely well with their senior pitch time this season and as for Will he was part of the pre-season team v Bath that inspired this from my writeup :

...all I could see at every breakdown were blue jerseys adorned with 6, 7 or 8 heavily involved in all that was positive for Leinster.

One other name that I noticed when researching those past matches against English and South African opponents was Ed Byrne who impressed me both times AND had a good shift last weekend as well.  If he keeps going like that he might be better known than the comedian of the same name who once said 'Hey Alanis Morrissette - rain on your wedding day isn't ironic, that's just unfortunate!'

If I must put a number on a predicted winning margin for tonight, I'll say 36 to challenge the lads to at least beat the bookies' spread.  But I definitely want at least fifty on our side of the scoreboard - there, I said it.

Hope to see you there...I have a sneaky suspicion that a combination of all the other rugby plus the opposition could lead to Leinster's lowest ever RDS attendance tonight...why not play your part in proving me wrong???  JLP