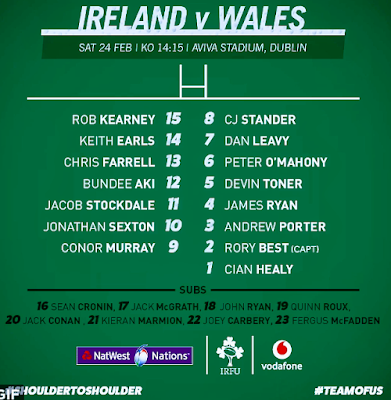 I think I may have used up all my sporting optimism this weekend already in my preview for Leinster v Southern Kings...I thought I'd have no problem psyching myself up for this match but when I saw the bookies were predicting an eight-point Irish win my instinct had me let out an audible 'Wha????'

And with three Lions falling out of our player pool as three rejoin Warren Gatland's, a task which was never going to be easy anyway got that much harder, especially when you consider our recent difficulties with this particular opponent.

The key would seem to lie with Joe Schmidt's demand for structure...when it works it can be a thing a pure beauty to watch for any rugby fan but if it takes us a while to get into our stride and start registering scores, what comes next can be unpredictable.

We have to assume that Gatland, AWJ and co have something up their sleeve to get our noses out of the playbook - maybe not as violent as 'targeting' our half backs, but more likely something  subtle, but the point is that we'll have to be both ready and able to respond.

Literally at the centre of our plans are Bundee Aki and Chris Farrell.  In my writeup of the Italy match I suggested Keith Earls for the 13 role but that's not to say I'm against Farrell he has played with Aki before and has spent plenty of time at Carton House to get to know the Schmidt way.  For me, I'm happy once they stay on top of defence and keep our power plays on the front foot.  A few line breaks would be awesome of course, but I'd accept a zero in our column if the Welsh were the same.

The breakdown battle will be interesting.  Joe has put a lot of emphasis in keeping the penalty count down so we'll have to find the right balance between staying competitive and being able to front up with the likes of Aaron Shingler and having Tipuric on the bench means it's going to be an eighty minute battle.

Will Iain Henderson be missed?  Definitely a quality senior player and with all due respect to Quinn Roux I have a feeling James Ryan and Devin Toner may be slated for full shifts but both are well able for it and when it comes to lineouts we've shown enough variety in calls with O'Mahony, Stander, and even sometimes Conor Murray providing decent options.

So as you can probably tell I'm expecting this one to be closer than the bookies have it.  That said, while I talk about the Welsh having a plan to undermine us that's not to say it will be enough to counter whatever Joe & Johnny have in store.  The only thing I know for sure is that we won't be able to take our eyes off this one for a second.

I still think we'll finish on top, but it may take another rollercoaster ride of emotions up near the levels from Paris to get there.  I'm saying Ireland by 1 to 3.  Get yourself ready folks!  JLP

PS Great comeback by the Under 20s last night, unlucky to fall short...best of luck to the Women on Sunday!