As we're about to post this writeup, word is coming through that Jamie Heaslip has announced his retirement with immediate effect.

Terrible news for him, Leinster and Ireland and we wish him all the best for the future. 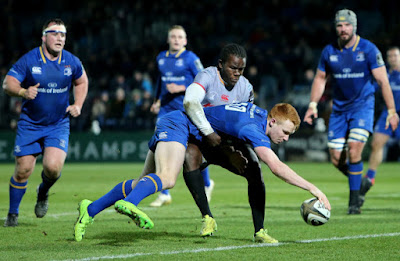 Before I start harping on this particular match, a quick word on Connacht's victory at Treviso from Saturday lunchtime.  If a certain mindset had its way, that match wouldn't have taken place at all because both organizations would have been disbanded long ago.

I'm referring of course to the notion that if a team keeps on losing it doesn't deserve to be in a competition.  Now to be fair, in most sports I totally get that concept, yet to say it about professional rugby clubs, provinces, regions or franchises shows a lack of understanding of how the game is set up IMO.

And the fact that I had to use four different words to describe the types of opponents Leinster face in this league illustrates what I mean.  Each union represented in the Pro14 has control over its own entrants and thus they will often come together on the pitch in widely different stages of development.

So for Friday night's match at the RDS you possibly had two from the furthest extremes of the scale - Leinster, who have a squad and overall set-up that are the envy of most in Europe, against the Southern Kings, who had about five minutes to prepare for this competition while also having to cough up some players their union wanted to keep under their umbrella.

I guess what I'm saying is...maybe we should go easy on them when it comes to questioning their place in the league, at least for now?  Treviso recently had a five-game winning streak, Zebre/Aironi have had some decent results over the years and as for Connacht, well you don't need me to tell you how far they went after avoiding extinction.

Besides all of the above, the SARU pay cold hard cash to be in this league just as the Italians do so as long as that continues, I can't see the Celtic unions worrying too much about what kind of rugby their teams offer on matchdays...

Now of course that doesn't mean I'm going to go lightly on the Kings for this particular performance!  It really was shockingly poor.  After the opening kickoff the ball got to James Lowe who let fly one of his booming punts that went past their fullback Penxe and along with winger Makase they were put under enough pressure to give us an attacking lineout on the 22 with barely a minute on the clock.

From there it was a penalty, kick for the corner, another lineout, some phases, a kick through over the line, back for a 5m scrum, a trademark angled run by the returning Garry Ringrose, before eventually it was hooker Bryan Byrne dotting down...the avalanche had begun.

The visitors had another restart and this time they sent it directly TO James Lowe, who said 'hey, this worked last time so...' and thumped another lowish trajectory missile towards the Kings 22.  Naturally Messrs Penxe and Makase, having been once bitten, are deep enough to deal with it?

Not at all.  This time they had to scramble even more and it wasn't long before Leinster were pressuring their line again - after another scrum it was Nick McCarthy meeting virtually no resistance while going over the line.

And as we're talking about playing to standards below that we expect in this competition, after the Kings finally got the hint and put the restart in the opposite direction, clearly the Leinster players were caught collectively dreaming about how many tries they were going to score as they allowed the ball to criminally bounce before it was recovered by the visitors who were eventually able to capitalise all they way to the tryline courtesy of hooker Michael Willemse.

In fairness to the visitors, the breakdown area was one where they at least tried to compete and they certainly couldn't be faulted for their physicality.  That said, this is what I'd consider to be the minimum requirement for a South African outfit and they were so far behind in every other department [with the possible exception of restarts which got better though I wouldn't shout about that too loudly] it barely made a scratch on us.

Thankfully their try served as enough of a wake up call for the boys in blue who had their turn at winning back their own restart and in much more conventional fashion we ran through phases back and forth across the field stretching the D enough for Bryan Byrne to have space to perfectly time a pass to try-scoring machine Barry Daly who sauntered over.

Eventually the man of the match honours went to young out half Ciarán Frawley who was making his first start and, given armchair experts like me were heaping pressure on him by demanding a cricket score, he must be applauded for overseeing an attack which did just that [albeit more of an 'England in the recent Ashes' kind].

But I can't go without making a strong case for Bryan Byrne for the gong...not only did he add a second try later in the contest but he also added to his assist total by providing the switch pass for Dave Kearney leading to our fourth which meant he had a hand in three of our tries that wrapped up the bonus point after just 22 minutes.  Clearly he read my preview which 'bigged up' his twin brother Ed and thus inspired him to greatness...you're welcome, fellow Leinster fans 😜.

If the prize used the American phrase 'Most Valuable Player' however, I'd probably hand it to both Nacewa and Ringrose before a ball was kicked on the night.  We really need them both to be fit to face Saracens after Robbie's injury, yet still we also needed them to have some on-field time together.

Let's just say I cringed every time either touched the ball and I was diving for cover under the counter in the press box when prop Pietr Scholtz was shoving Garry off the ball to earn himself a second half yellow card!  Thankfully both appear to have made it through unscathed although I'm sure Ringrose will have some Six Nations time for us to sweat even more while Isa should feature in Llanelli.

As I have another writeup this weekend I'll spare you the stories from all of the remaining tries, though I will highlight one in particular from James Lowe.  At one stage in the first half when we had an attacking scrum on one side of the pitch, I noticed he was way over on the other touchline making some sign language to his outhalf that was in anything but an obscure code...'kick it to me, I'll catch it, and I will score a try'.  Eventually in the second half, right after the yellow card to be precise, that is exactly what happened.

I had a feeling the crowd might be the lowest ever at the RDS what with the weather, the poor opposition plus all the other top rugby taking place over the weekend.  While you can never really trust the figure given over the loudspeaker, it certainly looked like a decent turnout by the time the match kicked off, although as Jordan Larmour was dotting down the tenth and final try on 76m there weren't too many left although maybe on this occasion I can forgive the early leavers.   Nah, actually as I see it typed I have to stay it's still unforgivable.

One thing we often hear from true Leinster fans at this time of year is something along the lines of 'I love when we get the chance to blood a few promising youngsters'...I echo that sentiment though I would point out that this is a love that could well be exclusively reserved for our own club because not many others are as blessed with a conveyor belt of senior-grade-ready youngsters as we are.  Along with Frawley we had Will Connors, Peader Timmins and debutant prop Adam Coyle adding their names to the ever-growing list and all performed well.

As for how Conference B now stands...we could have done with the Ulstermen doing us a favour against the Scarlets on Saturday night but then again, this margin of victory has stretched our points difference lead over the champions to a whopping 75 so you could argue that was like earning an extra bonus point, especially when you consider that on paper anyway, we have the 'easier run in'.

So it's all to play for and this win on top of last week's should give us a bit of momentum as the business end of the campaign draws near, as that was the time our form starting heading in the other direction last year.

But for now, I for one have no regrets braving the cold on the Friday evening to watch a Leinster tryfest and hopefully the SARU will be able to find a few extra rands to help the Kings out so they'll provide more of a challenging opposition next season [but not too challenging 😏].  JLP