We had some extra Six Nations harping to do so we're extremely grateful to Ciarán Duffy for shining from the bench by covering this week's Leinster preview & writeup! 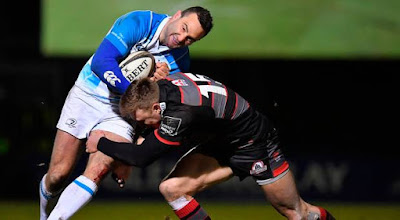 KICK UP THE HOOP

This is the third time I’ve been delegated the Leinster match write-up, and it’s the third time I’ve been left writing about a loss.  Maybe that’s because I tend to be given the write-ups when Ireland are in action, and therefore Leinster are missing a lot of talent.  Or maybe it’s the rugby blog gods conspiring to tell me that I should focus all my energy on tier 2 & 3 competitions, that this domestic gig isn’t my style.  Nonetheless Jeff is busy with Ireland duty, and probably spelunking, so Harpin’ on readers, you’re getting one of my soy-based imitation match write-ups.

Disclaimer, I don’t speak Irish, and have no idea of anything that was said during the game on TG4.  I can only assume they were talking about the game, or at least a game.  Now on with the review.

Aaaaaaawwwww do I have to review this game?  It was such a poor poor performance.  And not a winning performance that left something to be desired, a really poor performance.  How about another article where I turn the league into the Premier League?  Or I go through all the permutations for the World Cup qualifiers again.  Or maybe another look back at 2017.  Does it have to be rugby?  How about an Allianz League round-up.  Or we could all listen to my new podcast Pimp My Claustrophobia.  Maybe a wrestling article? Or some Donald Trump jokes?  No?  Has to be a write-up of the Leinster match?  Ok fine.

The first thing I can say about this match is that it feels more like Leinster lost the game than Edinburgh won.  All of the home sides scores came from mistakes rather than sustained pressure or territory.  The absence of players away on international duty was felt, particularly in defence.  The likes of Sexton, Rob Kearney, Furlong, Leavy, and Conan would have made a difference.  Sexton in particular would have helped with the decision making, which was poor.  For me the biggest loss was Isa.  Leinster needed a leader, and some solidity in defence, Nacewa would have provided that.  But the man needs his rest, particularly with two crunch games against Scarlets and a European Cup quarter final coming up.

Things started well for Leinster, very well.  Edinburgh were unable to deal with Leinster pick and goes, and Max Deegan got over.  Ross Byrne converted, Leinster were ahead 0- 7.  Just under ten minutes later Leinster shot themselves in the foot.  Luke Crosbie charged down a kick and nobody could catch him, Jaco van der Walt converted, and suddenly we were all level.  A couple of minutes later Nathan Fowles put the hosts in front after Mark Bennett ripped the ball from Dave Kearney.  Leinster were behind despite having been the better team.

It was a case of having to do it all again.  And they did it all again.  After a peiod of sustained pressure, Scott Fardy got over the line, Byrne converted.  Leinster kept the pressure on and Barry Daly was able to fight his way over the line.  The conversion was wide, Leinster led by 7.  Edinburgh had barely any of the ball, but somehow mustered up a third try through Murry McCallum (I’m a big fa of alliteration).  Leinster had played most of the rugby and yet were only ahead due to a missed conversion.

Edinburgh saw more of the ball in the second-half and would take the lead.  Sam Hidalgo-Clyne put in a clever box-kick, Duhan van der Merwe finished it off.  The hour mark saw the introduction of Luke McGrath for Jamison Gibson – Park, which brought improved game management for Leinster.  Leinster went back in front shortly after, Daly did extremely well to ground the ball before being pushed into touch.  Leinster led 22 – 24.  Edinburgh saved their one piece of particularly good play for the very end, van der Walt chipped the ball through, Glenn Bryce got up and parried it into Bennetts hands, Bennett got over the line.  The TMO saw nothing wrong, try awarded, and converted by Hidalgo-Clyne.  There was time for the restart, and when we needed a bit of magic which we saw last week for Ireland between Sexton and Henderson and Sexton and Earls, Byrne fired the restart straight into touch.  That was that.

Leinster dominated possession and Territory, Edinburghs only chances came from Leinster mistakes, and yet here we are.  ‘Positives, Max Deegan and Barry Daly had good games.  Also, two points from a poor performance away from home is a decent return.  It was also good to see Adam Byrne back.  The main positive came from Italy, where Benetton beat Scarlets.  Which means Leinster are now top of the conference, level on points with Scarlets, ahead on points difference having won the same amount of games.

This was a side missing a lot of first team names.  This game will stand to the new names and fringe players.  It was a frustrating result, one that will probably spur on Leinster for massive games against Scarlets and Saracens.  It’s only the 3rd loss of the season in all competitions, and with the circumstances, it’s not that bleak.  It’s good to have a reality check that at some point in the season, and with Scarlets losing this was a good time.  We’ll bounce back.

Ciarán Duffy (@TheVoiceDepth) is a Leinster supporter and self-proclaimed ‘big cheese’ of Post To Post (@PostToPostSport).   He’ll write about anything rugby under the condition he gets to take it too seriously.
*****


Want to see your own rugby opinions on the web?
Click "Write for us" in the sidebar to find out how.
at February 12, 2018