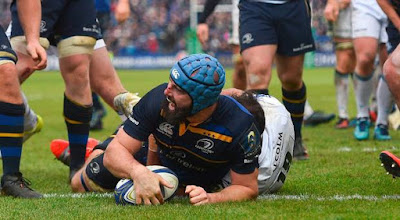 “So who won the match?” “Cleveland Cavaliers, by ten wickets.” “Ah, that's great. Would you like some gravy?”

I know what you're thinking...that's an extremely smart-arse reply to give to anyone asking an innocent question, let alone when it's your mother-in-law as she's placing a cracking Sunday dinner in front of you. But allow me to offer some context...

This has been a running gag for a few years now...we generally bring the kids to visit the inlaws on Sundays, so on the few occasions when Leinster or Ireland are playing, I arrive a bit later than usual. The lady has absolutely no interest in sport whatsoever, and that's fine, but after giving honest replies to her questions for the first dozen or so times, I eventually decided to have a bit of fun and see how far I could take it.

It began harmlessly enough...I'd say we lost when we won, that kind of thing. Then the team in question began to change...I'd say Ireland instead of Leinster...until it dawned on me that maybe she wasn't even sure what sport I was watching, so I'd tell her the Dubs won, etc etc, and now we've reached a stage where different sports get mashed up together with absolutely no shame. And I have yet to be poisoned by a dinner so either she hasn't copped on yet or she doesn't really care.

Look - no matter how much I enjoy watching Leinster, this was a match being played at arguably the most awkward kickoff time imaginable [I know that's a broadcasting call but that doesn't alter the peskiness], and what's more, the expectations were that it was going to be a blow-out, which it was. So I'm not going to apologise for a bit of harmless japery, unless of course you're actually reading this Rita, in which case I wholeheartedly apologise and sincerely hope you noticed the part where I said the dinners are 'cracking' 😉.

The reactions from this match have been everything from 'Leinster are definitely going to win everything' to 'Whoa hold your horses nothing has been won yet' and while I'm way too superstitious for my own views to stray close to the former, I generally get annoyed by the latter as well because it feels like people are trying to take the enjoyment out of a good victory. I'm a Leinster fan, and Leinster won well, so after all is said and done, I'm happy.

When this match kicked off I wasn't thinking at all about the equally convincing win over Ulster last week. When the match in Montpellier kicks off next Saturday, I won't be thinking at all about this one. But for now, I have eleven tries on which to harp and my guys got eight of them, so with that in mind I'll get on with the task in a mostly positive frame of mind.

Glasgow started well, with their mischievous winger Matawalu snatching his own side's kickoff, but when referee Marius Mitrea pinged their scrum half for a crooked feed [first of three calls on the day, a welcome surprise], the Fijian was suddenly presented with an entirely different type of catch, namely a high bomb from Sexton with Scott Fardy and James Lowe hurtling towards him. I thought we were a bit lucky to win a penalty, but when it was dispatched to touch the sequence of lineout > maul > Jordi Murphy running straight through would-be Glasgow tacklers looked way, way too easy.

The visitors to their credit came right back at us and on a quickly tapped penalty Ali Price was tackled a bit too early by Jordi which meant his try was quickly followed by a yellow card. The Newstalk radio team thought the call was harsh but having seen it a few times I think I'd be giving out had it been the other way round with no action taken.

But although the Warriors piled on the pressure with the extra man and crossed the line courtesy of the ever-involved Matawalu, it took them a good seven minutes of game time to knock on our door before we let them in, and what's more, in true blue Leinster fashion, we were to respond in kind and then some.

I have lumped these scores together because they are mostly thanks to Robbie Henshaw and his excellent work rate. First he won us the restart after the Glasgow try putting us back on the front foot, and a strong run by man-of-the-match Luke McGrath helped us advance further before Isa was trotting across the line about as easily as Jordi had done.

Then it wasn't long before Henshaw was chasing down another tackle, getting up and causing mayhem in the breakdown area and winning a penalty in front which Sexton dispatched which meant Glasgow's seven points had been met with ten down the other end in no time.

It was a good stretch from 'Nugget' to get the ball over the line but again this try ended up looking far easier than it should.  For all of Glasgow's willingness to have a go at our try line their inability to defend their own was their undoing in the first half.

Anyone who saw Jordan Larmour over the Christmas period knows how he can punish a poorly executed clearance kick so when one fell into his arms the RDS crowd got excited and he didn't disappoint. His ability both change direction without breaking stride and time the offload to perfection created the space for Lowe, Sexton, McGrath and Fardy to combine well in the wide channel for the Wallaby to deservedly register his first try for the boys in blue.

Here's my only negative comment from the match...I'm trying to come up with a way of quantifying the amount of work an outhalf does above and beyond his generally accepted duties, and while I haven't sorted out the numbers yet, for now I'm calling it the 'Goode/Sexton Scale' after players I'd have at either end of it.

Maybe that's a bit harsh on Andy Goode and I'm open to debate on that, but I have no doubt that while Sexton's eagerness to play and abilities in areas like tackling deserves praise, I still think he goes too far and when his face whacked off the ground after his try [finished after more good work up the line by Messrs Lowe and Fardy], for me it was a no-brainer. pun intended, that he should have gone for an HIA, especially as it was pretty much the final action before the halftime break.

This was another easy-looking finish after a lineout and maul but despite the fact it took almost half of the second period for the score to change, both teams deserve credit for keeping the ball moving and generally trying to keep the scoreboard moving.

After a spot of turnover tennis at midfield eventually it was Adam Ashe putting the Warriors into double figures on the scoreboard.

One interesting feature of the final quarter was Jordan Larmour moving to outside centre as Rob Kearney took to the field to replace Henshaw...I wonder if we're thinking of playing him there during the Six Nations [of course I hope Joe calls him up for training but I also hope he can tog out for us if he doesn't crack the matchday squads].

He didn't get many conventional chances at 13 here, but he did chase down a tentative kick forward well, forcing Ruairidh Jackson into touch and from there we worked through some phases before it was James Lowe crashing over the line for our seventh try of the day.

I don't think even the most loyal Glasgow fan would feel they deserved a bonus point of any description from this match, but it could be said this was the pick of all of the tries as it took acrobatics from Niko to finish, plus the conversion was put over effortlessly from the touchline by the young Springbok replacement flyhalf.

The perfect way to round off a display like this is a late Leinster try to punish the 'early leavers' and this match even had one of those. Once again it was an all-too-easy five-pointer after a lineout and maul with Fardy helping himself to a second, and honourable mention must go to Andrew Porter who moments before jackled his way to the penalty which created the opportunity.

So as I have pointed out many times since our Rugby Champions Cup campaign began, we are in a pool with the teams that have the best records in all three domestic European leagues [and we all know Glasgow will be a much different proposition if/when we face them in the Pro14 knockouts], yet with a match still to play, a home quarterfinal is already guaranteed. How could we possibly have any complaints about that?

We have certainly come a long way from Leo Cullen's first European match in charge, also a Sunday lunchtime kickoff at the RDS. One thing is for sure...if we can keep this form and these results going through May, I'll be telling everyone about it in great detail, even the mother-in-law!!! JLP