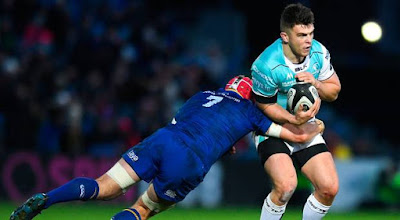 When the clock ticks past the eighty minute mark in a rugby match, even if the scores are close, most onlookers find their thoughts straying to what they plan to do afterwards.  Head coaches have post-match remarks to prepare, journalists have copy to file, while fans have things like busses to catch, kids to usher back to the car, or pints to order.   Not in the case of this New Year's Day interpro, however - things were arguably only getting started.

Mick Kearney had already been quite involved in the action for his fifteen-minute cameo at that point.  With Connacht just three points behind and chasing a first-ever win at the RDS, their former lock first thwarted an attacking lineout with good work at the maul, then he  created another when he was pinged for not releasing...finally on the 80:15 mark his high tackle at on Niyi Adeolokun handed them one final chance.

One thing I often harp on as something Leinster are particularly good at is responding after conceding a score or two.  Even if you manage to put fourteen quick points on us like Munster did at Thomond on Stephens' Day, we somehow find a way to win - and we had also seen it early in this match when Connacht saw a first-minute penalty pegged back shortly afterwards.

But as impressive an ability as having an extra score in your back pocket might be, it doesn't help much when you ship a try to fall behind when there's no time left on the clock, and if our visitors had breached our line from that last-gasp lineout it would have been an losing start to 2018, and let's be honest - that was the result every non-Leinster fan watching wanted.

Thankfully the boys in blue have something else they're good at.  After James Cannon rose to win the lineout, they got good crash ball from former Leinster prospect Tom Farrell to put them on the front foot in our 22, and that's when 'The Phases' began.

Delahunt, Dillane and Butler each had at least three carries as Kieran Keane's men repeatedly found Leinster's shoulders to be anything but soft.  As I watched from the press box at the back of the Grandstand my heart was pounding in my chest at every contact - whatever had gone before in this match, these are the kind of situations we live for watching this wonderful game - either Connacht were going to cross the line and win, or we were going to deny them.

Could the visitors have opted for a drop goal to share the spoils?  Of course they could have, but even without the age-old sister-kissing metaphor, you had to feel the history books would be weighing heavily on them to go for the win, and to their credit they did.

Could Ben Whitehouse have awarded them a chance for a match-tying penalty under the posts?  Of course he could have - an examination of the sequence will definitely show an offside Leinster defender here, a tackler holding on too long there, and an illegal hand in the ruck elsewhere.  But not only were Connacht committing just as many no-no's in that time [clearing out from the side here, holding on too long there, blocking elsewhere], chances are they'd spurn the three points to hop back on the phase train anyway.

So what we ended up with was twenty-eight pulsating phases which started at the 22 and got all the way to our line before being driven most of the way back and finally Max Deegan was able to latch on to the ball long enough for the ref to have no choice but to raise his hand in Leinster's favour for one last time.

You could make a case for Deegan to be man of the match, with that decisive jackling on top of getting our first try; also, many of the Connacht restarts went to him and were handled well.  You could make a case for Luke McGrath; he also got a try [with a neat crash and twist to finish], he combined well with his skipper at outhalf to create space for us at key times, and he certainly wasn't lacking for physicality.

The case for Sean Cronin, who actually got the award from TG4, may not be quite so strong.  He had a couple of strong carries and a notable counter-ruck, yet while I try not to lay all the blame on the hooker for lost lineouts, the two that Leinster conceded on the day were at high-profile points, namely the first of the match plus one before the half which led to Connacht's first try, strongly finished by Finlay Bealham giving the visitors a lead to bring into the dressing room.

For me, the top gong can only go to Josh van der Flier.  Tackle counts are stats that should be handled with care, but when someone has a whopping 34 to his name with none missed, they cannot be ignored, particularly in a match like this. He wasn't the only one a with noteworthy tally - Deegan made 26 and Ross Molony 27 but Josh had enough for two on each Connacht player with four left over for the bench...I bet even the subs warming up behind the posts were looking out for a lowered red scrum cap heading towards them.

How nice of Dan Leavy to limit himself to 'just the one' key turnover after his powerful outing in Limerick to give his fellow back rower a chance...though on a serious note I hope his withdrawal just before the break wasn't for anything too serious.

When it comes to the visitors' side of things, while they definitely could have won, they can't really look to the ref nor anywhere else but themselves for falling short. Leinster made plenty of errors on the day...a Sexton clearing penalty failed to find touch, a Rob Kearney territory kick went dead dragging play all the way back, we failed to close out the first half and nearly did likewise with the second.

Each time however, it seemed like Connacht were willing to respond with a similar mistake of their own and that's probably where the answers can be found. You certainly couldn't fault their determination though and they still have loads to play for this season - we must go to Galway for our final regular season match and we won't want to be looking for too many match points when we do.

Back with Leinster, a few honourable mentions...first, James Lowe. I said earlier we need to be careful with tackling numbers - the stat-man had him down for four missed and this is something he probably should be working on. However, when you can bring the kind of attacking ability to the table that he does...the extra metres after getting hit, the booming left boot, and most of all, the 'Sonny-Bill-esque' improvisation for offloads like that which allowed Reid put through Deegan for the first try, you tend to be forgiven.

Then there was Rob Kearney. He played like someone who's place in the team was being challenged by a young upstart or two in the squad...and that's exactly what a team chasing silverware wants. Even his biggest error on the day, that overcooked territory kick, was more bad luck than anything else and he really does seem to be approaching his best.

Finally we can't ignore Johnny Sexton - the tackle fest among the forwards meant his chances were few and far between but when they came he was generally able to manufacture space from virtually nothing. His most important contribution though was probably a penalty on 48 minutes.  It was just inside the Connacht half, far from central and most of all the strength and unpredictability of the wind were at Sportsground levels and he had issues up to that point.  I thought he was mad not to go instead for touch...he proved me shamefully wrong.

On the subject of place kicks, the RDS crowd groaned when Sexton's conversion of the Deegan try took a flat trajectory and went wide but I'd argue that it was in fact a superb attempt to master the wind from a seemingly impossible angle.  Meanwhile his opposite number Jack Carty failed with a later conversion at the same end despite a much more favourable angle.  After battling for almost half an hour to get that second try [very well finished by Healy I might add - even Leinster tacklers couldn't stop him] those two points were as badly missed as the kick itself.

The McFadden collision with O'Halloran deserves a mention from me but not much more because I reckon the referee was spot on with his decision.  Whitehouse gets a lot of stick but as I watched replay I was grasping for words to describe what happened and for me he supplied them perfectly with 'timing issue'.

So in the end [the very, very, VERY end] it was a winning start to 2018 for Leinster - it was far from a perfect display but you have to at least admire the way we identified the areas where we needed to excel before doing just that.  The four points keeps us in touch with the Scarlets at the top of Conference B, though we've another province on a high from a recent home derby win coming to the RDS in a matter of days, and if Ulster win then we'll be the ones looking over our shoulders.

Onwards we go into the new year...here's to more results like this to celebrate...and I wonder who's next in the Leinster lineup for a match-winning display?  JLP