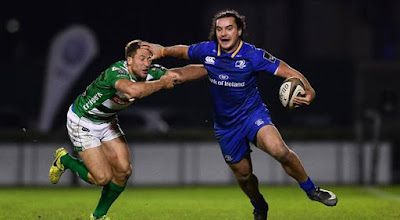 Now is the best time to put in your online orders to receive things on your Christmas wish list that need to be shipped from abroad...thankfully one made by Leinster earlier in the year has arrived from New Zealand just in time for our most important series of matches in the season so far, namely a home and away v the English champions followed by each of the other three provinces in turn.

It has been almost nine months since news first came through of James Lowe's signing...at the time, Leinster were sitting rather prettily with a home quarterfinal in Europe secured and tries raining in at the RDS.  Since then, however, a pair of semifinal disappointments plus a revamped domestic league have shown many challenges still lie before the boys in blue if they're looking for silverware.

We had been tracking Lowe's progress when possible since then, as he completed his Super Rugby commitments with the Chiefs before having one more provincial campaign with Tasman.  And while it was exciting to see the kind of talent Leinster were getting, there was also much anxiety as we watched, what with the possibility of injury as the Makos made it all the way to the final.

Thankfully he was ready to wear the Leinster harp on his chest in Italy on Saturday and we could see exactly what he could bring to us.  For the first ten minutes or so, things were not exactly going well.  The first punt from his booming left boot went straight to a Treviso player, his first run took him straight into Ian Nagle, and he over ran his first kick chase to miss the tackle completely allowing our opponents to get front foot ball in our half which eventually saw them take a 3-0 lead.

But having watched him play over the past few months, I knew there was more to see about him from those early touches than the errors themselves.  There's something about his body language that just exudes confidence - 'I have the ball now and I'm going to make something happen' - and once the early cobwebs were brushed off he was able to back up that swagger to play a large part in his new team bagging a very handy five league points.

Don't get me wrong...it certainly wasn't ALL down to him; in fact, over the years Leinster have been one of the best teams in Europe at fighting back after conceding an early score.  But let's just say the new boy looks right at home in our set up - on one of our first lineouts deep in their 22, although our maul was heading towards the line, skipper for the day Luke McGrath chose to use Lowe as a crash ball option instead and he duly obliged with a strong finish.

And we weren't done there - Garry Ringrose, himself a virtual 'new boy' to the squad as far as this season is concerned, ripped back possession for himself shortly after the restart and hey presto we were back on their try line - if ref David Wilkinson hadn't gotten himself in the way we could have scored but we still made do with a penalty.

With our tails well up we got ourselves back into their 22 when again it was Luke McGrath providing the telling pass which this time made the most of a telling line run by Jordi Murphy that got him all the way to a five-pointer.  If anything we should have had another before halftime but we definitely looked to be well on the way to a maximum points haul as the whistle blew.

Let's just say the opening minutes of the second half weren't very 'championship' for us.  Losing the ball into touch on your own possession via passing and carrying is not just taboo at this level it's downright criminal, yet we managed to do it three times in the first five minutes of the period.  Meanwhile our hosts were having problems of their own yet they managed to work their way towards our line...eventually it was their Argentinian centre Juan Brex getting it down under the posts.

This score made it a seven-point game, which posed a great challenge to Leinster.  Do we fold, or do we respond much like we did in the first half?  Once again it was Luke McGrath involved in finding the answer.

For most of that third quarter we had regressed it's true, but you had to think there were enough leaders on the pitch to show us the way.  And not only have Leinster been willing to award more senior caps to younger players in recent times, we have also been willing to hand the captain's armband to those who have shown themselves worthy - Rhys Ruddock was one, Ross Molony more recently and for this match it was Luke McGrath.

Remember a time, not so long ago, when we were worried about losing both Eoin Reddan and Isaac Boss at the same time?  Those worries are over.  Gibson-Park has some settling in to do but can definitely do a job and in Nick McCarthy and Charlie Rock we have more talent on the assembly line; all are clearly behind Luke who has shown time and again that he is heading for the highest level.

And as if his contribution up to this point wasn't enough, just when we needed some leadership, he spotted that Treviso's reserve hooker Aquaman Epalahame Faiva left the pillar position wide open at a ruck - this inspired our scrum half to 'get his Webb Ellis on' by picking the ball up and running deep into opposition territory.

This gave us the boost we needed - although we got pushed back a few metres, we had Lowe skipping up the touchline, Scott Fardy [another great shift of mostly 'unseen work'] barrelling his way towards the line, both with excellent support.  Finally we had Faiva being shown up again as Ringrose wrong-footed him to restore our fourteen-point cushion.

And all that intense Leinster pressure got even more reward as the TMO pointed out to the ref that there had been a no-arms tackle by Brex - having been celebrating a try just minutes earlier, he was now headed for the naughty step.

In fairness, the way the match went from there, I'm not altogether sure if we even needed the extra man to get the bonus point, but shortly after the restart a loose ball was pounced on by Fardy and a few phases across the pitch later we had Lowe once more making his way up the line into the opposition 22...in support was his skipper McGrath again - having had a hand in all of our tries on the way to the bonus point, it was fitting that he finished the fourth.

And so it appears we have two strong contenders for Leinster's man of the match.  Luke was heavily involved in all four scores it's true, but then again so was the new arrival.  How on earth could we settle this?

Enter try number five - phases on the Treviso line followed by a long accurate miss pass by Noel Reid which found Lowe who still had to beat his old Tasman teammate Marty Banks but did so with ease to provide the crushed walnuts on the icing on the cake.

Overall it was a nice team display - took a while to get going each half but for an away trip with so many changes to the squad including a new arrival and returnees from injury, to come away with all five points is as much as we can ask for.  Hopefully Luke's early withdrawal wasn't for anything too serious.

So it was very much a good weekend for Leinster; on top of the away win, our Conference B rivals Ulster and Scarlets both dropped points.  Next up for us in the Pro14 are Munster on St Stephen's Day - they also won 36-10 in this round and will no doubt be looking for revenge.

But now, it's all eyes on the Champions Cup.  Massive back-to-back series with the reigning English champions [and current table-toppers] the Exeter Chiefs.  Looking back at our season so far, I dare say we're as ready as we can possibly be....bring it on.

Finally, many thanks to those who offered suggestions for the title of this writeup - 'Lowe Scoring Game' and 'Swing Lowe Sweet Chariot' were worthy contenders but I had 'Lowe and Behold' in my head while the match was still on and it was kind of locked down!  I have a feeling James [who, according to Leinster's twitter feed, can be called 'J-Lo'] will be making many more headlines for Leinster in the future so they shouldn't go to waste.  JLP