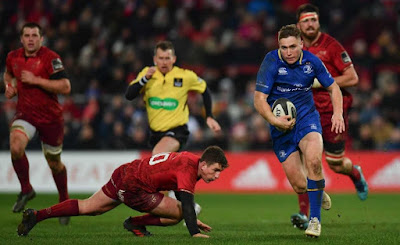 Trying something a bit different to tell the story of this Christmas cracker...we have used categories before, but not all brought to you by the same letter of the alphabet.  Basically you're about to see more L's than the sign at a Welsh train station...

According to our preview, Leinster's task was to both get a hold of the breakdown battle and put points on the board as early as possible.  I don't think we could have ever dreamed of asking Santa for those boxes to be ticked by the 12th SECOND!!!  At the first breakdown Dan Leavy burrowed his way to a penalty which Ross Byrne duly converted.

It comes as no surprise that Dan was man of the match when you add that to his try on 9 minutes when he found himself wide open to receive a trademark kick pass from his out half, his 16 tackles, and as the home side looked ready to get within a point of us having been 22 behind at the break, yet another crucial jackling penalty embellished by a classic celebration.

Having had him in my 'ideal starting Leinster lineup' back in July it was great to see him shake off his injury problems and put in the kind of display he has always been capable of before such a large audience.  There's a lot more to come from him I reckon.

How can you win a tough away match so comprehensively with just 39% possession and 34% territory?  Scoring tries certainly helps, but so do tackles, tackles, and more tackles.  Toner 22, Henshaw 20, Jordi 17 were among the leaders but it was mostly a team effort with just under 200 made overall and a 90% success rate.

Leinster have had a couple of stumbles this season it's true, but you can't amass an overall record of 13 wins out of 15 [including 4 from 4 in Europe and doubles over teams like Exeter and Munster] without being well prepared.  I mentioned the stingy defence already and our 34 points didn't put themselves on the scoreboard, but it wasn't just the tactics that impressed on the day, it was the way the 15 men in blue seemed so match ready from the kickoff.

OK this writeup has been another L up to now, namely a 'love-in'.   Time to harp on Munster for a bit, and it's not as though they came into this match with absolutely no plan.  Something had to get them past our line speed and it was clear that shipping a long pass to the wide channel as quickly as possible from the breakdown was their method of choice and you know what, it played a large part in their coming away with a four-try bonus, not that it would serve as much consolation.

Another way the home side tried to throw our D off kilter was with innovation at the lineout, similar to that which the Scots used against Ireland at Murrayfield back in February.  First throw a couple of backs into the line to have the opposition going 'wha?' then execute your play.  This time it was Conor Murray of all people taking the catch and while the set piece didn't directly lead to a try, the Ireland scrum-half's persistence did and it finally got the home side on the board after falling 0-13 behind.

For Leinster's part our lineouts weren't anywhere near as 'fancy' though having struggled in this area all season it was good to go 9 for 9.  Munster had a couple of costly yips of their own in the second half, more on that later.

He was far from man of the match, but for someone experiencing this unique occasion for the first time he was certainly up for the battle and I didn't expect anything less.  Seemed to love being the 'bad guy' and if the Munster fans were the type who would 'boo' the opposition [which they definitely aren't] the Kiwi would probably figure he was doing something right.

I don't care how blue you think my goggles are - Andrew Conway's challenge on Lowe was both a yellow card and a penalty try all day long and Nigel Owens not surprisingly got it right, although he neglected to mention the sweep of the leg under the Leinster winger to go with the grab without the ball.

This score was arguably more pivotal than the one that dominated the highlight reels later in that it not only repelled the first attempted Munster fightback but it gave us a spell with an extra man to increase the advantage even further.

This is a handy category to name Leinster players who impressed yet don't have the desired letter at the beginning of their surname, although Messrs Larmour and O'Loughlin began the move which led to the third Leinster try; the former taking a good catch and the latter surging into the space left by the Conway sinbinning.  A neat offload to Daly was followed by an even neater one to Henshaw who had an easy finish.

But most impressive among the 'non-L' names was Ross Byrne.  He was far from a 'Sexton placeholder' on the day; nailing all his kicks from the tee, assisting in the Leavy try and showing good intelligence with the ball in hand.

Dave Kilcoyne is my Munster mancrush and I don't care who knows it.  He displays all the attributes I expect to see from the position I played very badly back in the day, and as his team were falling 22 points behind on the scoreboard he was providing pretty much their only silver lining in that he was 'pwning' Michael Bent in the scrums, as well as giving James Lowe a cheeky little Thomond Park welcome after a kick to touch.

I'm not sure if I'd put Killer ahead of Cian and Jack on the Irish pecking order but he definitely should feel unlucky he doesn't have more caps than he does.

I understand why the mainstream media feel the need to avoid going overboard in praise for one team over the other particularly for matches like this, though perhaps the headlines saying Leinster 'edged' the match were a bit far-fetched.

On Leinster's side, I'm afraid to say it was only Jamison Gibson-Park who had multiple ticks in my negative column.  I'm really pulling for him to come good but with a couple of forward passes and a missed catch among other things, his display did stand out and I wonder if McCarthy might have been brought on sooner.

We don't need to stretch our imaginations too far to guess what went on in the Munster dressing room at halftime, and you can be sure it was the likes of Peter O'Mahony not only providing inspiration, but also owning up for not getting the better of their opposite numbers before the break.

It 'only' took the Munster skipper 32 seconds to force a turnover after the kickoff, and while the dodgy darts held them back a couple of times, they were determined to move their side of the scoreboard and with half an hour left they had narrowed the deficit to 'just' eight points courtesy of tries from Keatley and Conway.

Leinster struggled to get hold of the ball in that time and at one point had a scrum advantage I really think should have taken to slow things down.  We were also probably lucky not to lose a man in that third quarter as our penalty count continued to rise.  Right up to the final 12 or so minutes a Leinster victory was by no means certain [though I still say we definitely didn't 'edge' it].

The timeline for this sequence is both fascinating and the reason we've gone with L words for this piece.

66m - before a Munster lineout at our 22 following a penalty, Dan Leavy starts to trot off the pitch thinking he has been subbed only to turn around as it is actually Jordi being hauled ashore
67m - 14 punishing phases after the lineout, Leavy latches on at the breakdown to force a soul-sapping penalty which leads to his #powerstance
68m - from the lineout following our clearing penalty, we kick towards the halfway line where it is taken by Alex Wooton who launches one back at us - this one arrives in the hands of Jordan Larmour in his own half.

You know what happened next but I'll describe it anyway.  Multiple red jerseys left in Lamour's wake and although perhaps he should have used one of the three players in support as Simon Zebo was bearing down on him, his determination eventually got it down for a sensational match- and bonus-securing try just when Leinster needed something special.

Jordan has impressed in blue since way back in preseason and ahead of the trip to Exeter I described him as a 'potential RWC2019 bolter' - this has done that lofty claim absolutely no harm and his overall contribution on Tuesday was mostly impressive too.

While victory was assured by that stage, the allocation of match points certainly wasn't...the home side were in with a shout for pinching as many as two which would help in their Conference A battles with the Warriors and Cheetahs.  The quick long passes to the wing did get one of them as Conway was over in the corner again but they couldn't get the margin under ten from there.

Bit of a stretch getting this heading to begin with L - those Roman numerals represent the number 58 which was the total points scored on the day.  I mention it because by all accounts this match was very much enjoyed by all neutrals, including the referee himself.  It certainly lived up to its billing and not for the first time, did the league proud.  You can be sure the men from Munster will be keen to have another chance to 'stand up and fight' us, and the way the new league format looks I'd bet on them getting one before the season is done.

Absolutely no time for Leinster to rest on any laurels - a confident and well rested Connacht come to Ballsbridge on Jan 1st and just a few days later we host Ulster.  Then it's the small matter of our final two European matches to hopefully secure a high quarterfinal seeding.  Then it's a crucial pair of chances for revenge on Pro14 champions Scarlets during the Six Nations.

So as you can see, there's much rugby to be played, and I'm out of L words [just realised I never actually used 'Leinster' in a title!!!].  The boys in blue are definitely on an upward curve heading into 2018...I can't wait to see how high they can go.  JLP

WINTER SALE ON NOW
UP TO 50% OFF CLICK HERE