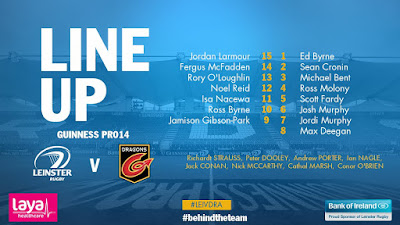 There's a mighty big difference between expecting a bonus point win and needing one.

Just having two defeats to start the season is enough to have Exeter atop the Premiership, and the same goes for Montpellier in the Top 14.  Yet for us in Conference B of the Guinness Pro14 right now, it only has us in third, and we'll want to be higher than that come playoff time.  Sidenote - Glasgow's unbeaten start in Conference A means we're the only team in our Euro pool currently not in first place domestically...though leading the pool itself does help ease that particular pain.

After eight rounds we currently lie one point behind Ulster, who host Treviso tonight, and a whopping seven behind the Scarlets, who travel to the winless Southern Kings.  We really can't afford to be dropping too far behind them, particularly the reigning champions whom we must face in a virtual 'back to back' series during the Six Nations.

With this in mind it is very important for us to put the disappointment in Scotstoun behind us, hit the ground running tonight and give Bernard Jackman pretty much the same reception he got back at the beginning of December.

One of the main features of that opening day victory in Newport was the performance of skipper Isa Nacewa at inside centre, and I have to say I'd be a lot happier about this lineup if he was there, and even happier still if he had Garry Ringrose outside him and James Lowe on the wing.

That said, what with our 'need' for five-pointers tonight, the centre pairing we have of Noel Reid and Rory O'Loughlin certainly know how to cross the tryline so the hope will be that we won't suffer too badly on the defensive side of things.

In the pack we will be very much in need of leadership, and while I'd say Ross Molony could well be designated 'leader', we'll need Cronin, Fardy and Jordi to step up as well.

But where we'll need a solid shift most of all is halfback.  Ross Byrne has a host of quality backs at his disposal to run in some scores but it will be all about how he uses them.  He is generally good putting boot to ball but it has to be in the right situation and it will also depends on how he gets on with JGP who badly in need of a decent outing.

Our bench has the look of one that hopes to give game time in the final quarter to certain players in a match already won.  With the exception of Jack Conan I don't see anyone we can really turn to if we're still in search of a fourth try or, heaven forbid, the lead!  Let's just say I hope none of the others get the chance to prove me wrong!

The bookies have us winning by 25 and that looks about right though while I feel we should get the four tries, we might have a couple of scores down the other end to moan about afterwards, though given this is an unusual matchday squad I'd be happy enough with the five match points with a smaller margin; I'll go for 14-16pts.

Of course the other benefit to running in loads of tries will be that it gives us plenty of opportunity to clap and thus keep warm - looks like it's going to be an icy evening in D4.  Wrap up well, hope to see you there.  JLP