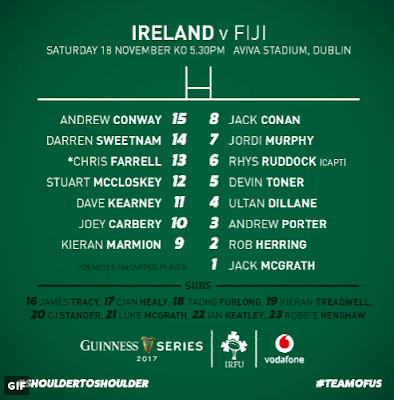 The Irish World Cup bid for 2023 is done.  We lost.  We first thought the South Africans had won, but instead it was the French.  Fair play to them.

Some want to blame World Rugby.  Others want to blame the Welsh and Scottish unions.  I even hear some Senator has decided to pick up the issue and run with it like it's a political rugby ball.  Personally, while I wasn't crazy about the process, I think it was down to economic realities way above rugby's paygrade on a global scale, but here's the thing - we're slap bang in the middle of a season and there are far more pressing matters to be harping on now.

And in case you need more perspective...we think we've had a bad time of it lately rugby-wise?  Try telling that to Fiji and other Pacific Island nations - they can give you a tale or two from recent times.  And beyond rugby it's even worse - just a few weeks ago we shut down as a country as we were hit by a tropical storm which came with it's own tragedies, yet nothing compared to the nation of Fiji which is still recovering from Cyclone Winston in February 2016.

But back to the match at hand - we've a much more imminent World Cup to prepare for and some very winnable competitions before then - two Six Nations and a three-match tour of Australia.  Last Saturday's taming of the Springboks was an excellent start to the 2017/18 test season for Ireland; now we get to see how much of that success was down to us.

Of course with this being the 'minor' fixture for November there are a host of changes to the matchday 23, but that can't allow for any less scrutiny.  Joe Schmidt's philosophy takes the field with the boys in green whoever wears the jerseys, so if anything it will be interesting to see how this particular selection gets on.

In the centre we have the beefy Ulster-born duo of Stuart McCloskey and Chris Farrell.  They both came to prominence mostly by being strong ball-carriers but I wonder if that is what will be asked of them on Saturday.  Bundee Aki has also been known to bust through a gainline or six yet he didn't even seem to try against South Africa; that was probably by design and we'll see if the same goes for tomorrow's 12/13 combo.

At out-half there's Joey Carbery - a very different type of player to Johnny Sexton and this is a big opportunity for him to show how he can execute the Joe playbook.  Given he was most likely the choice to wear ten for this match when the season kicked off, it's odd that Leinster passed on so many opportunities for him to play there beforehand - we'll see how quickly he settles against what looks to be a physical Fijian XV.

In the pack, more sweeping changes - I suspected Rhys Ruddock would be captain and he's in a back row that you wouldn't even guarantee starting for their province in Europe.  Still, I reckon he could be key to our chances of posting a decent score.  If he continues his form from this season so far, including his cameo against the Boks, it would be hard to drop him the following week against Argentina.

When it comes to Fiji, Italy warmed them up for us last weekend [as they will the Pumas tomorrow] and they were strong enough both attacking and defending but only in broken play.  They have their trademark offloading game with players like Nakarawa and they have muscle like Nadolo.

But in the realm of set pieces and other controllable situations, they struggled.  Italy's mauling effectively won them the game, and even with a second string pack ours should be better.  I'd expect the visitors to break our first line of tacklers a few times and perhaps even cross our line once or twice but for the most part we ought to be able to cope.

The bookies have us winning by 25, which is amazing since we bettered the Boks by ten more.  If it were down to me I'd challenge them to beat last Saturday's margin, though I'm sure Joe will be happier with less on the scoreboard once individual displays around the park are to his liking for bigger contests down the line.  Officially though, my prediction is 36 - and we've a strong bench more than capable of getting us there.

Hope to see you at the Aviva Stadium tomorrow, here's to another fine Saturday evening's test rugby.  JLP

PS - Many thanks to all who read, liked and/or shared the Springboks writeup - record hits from just over 9 years of harping on Leinster and Ireland rugby matches.