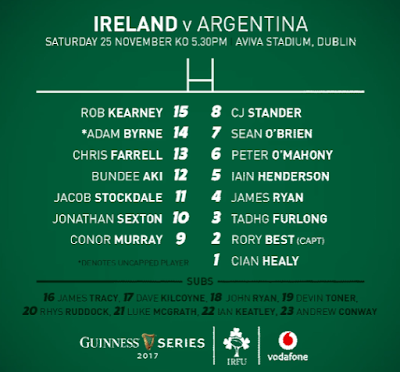 I was annoyed at myself for feeling confident about our chances in this match, mostly because that's pretty much how I felt when we played the Pumas 'that other time' - I'll spare you the link to the corresponding writeup for once.

Then as the time approached for the team announcement, news trickles down that Robbie Henshaw is ruled out with a hamstring injury...very bad news for Ireland, hopefully not too bad for Leinster if he can recover sooner rather than later.

We often have late changes to the lineup but for this Irish setup, at this time when others are missing, and against this opposition, it's a particularly bad blow.  That might sound like I have absolutely no faith in Chris Farrell - that's not true.  It's just he's 'no Robbie' as far as Joe's style of play is concerned.

In the area of 'crash ball' we certainly have a pair of centres who can do some damage but it's when they have the ball when I'll be most concerned - we were punished in that infamous quarterfinal for being 'too narrow' and just last weekend Argentina showed they can still move the ball quickly in the wide channels.

That said, Farrell will have much better options inside him this time than he did against Fiji when I felt he, McCloskey and Carbery were initially at fault before what turned out to be a piece of brilliance from Nemani Nadolo.  Sexton and Aki showed us how well they can anticipate where the ball is going from literally the first minute against the Springboks, so hopefully we'll have nothing to worry about.

Another who would concern me on the defensive side of things is Adam Byrne.  Much like Farrell, he can do great things with ball in hand, but let's just say he has some work to do in one-on-one confrontations outside so the hope is that he won't see too many of those.  That aside however, it's great to see him get his chance in green and with himself and Stockdale on the wings we have quite formidable options with the ball, with just the right pair of halfbacks pulling the strings to get the most out of them.

In the pack James Ryan is set to pick up some valuable experience and he finds himself surrounded by plenty of test caps to help him through.  And I very much doubt the playbook for the day shies away from using him either - with 'Big Dev' on the bench we'll be looking to Ryan for much lineout ball.

Also in reserve is Andrew Conway - some may raise an eyebrow given he has played so well in previous weeks but let's not forget the overall November remit, namely broadening our available base of players; making sure nobody starts all three matches is a good way to do that.  Hopefully he'll get his 'proper' reward when we kick off our 2018 Six Nations campaign in Paris.

According to the bookmakers, we should win by fifteen points.  I can't even hope to be that optimistic, but I do believe we can prevail, maybe by 7-9 once we get on the board early, also once we stay on the right side of the ref because Nicolas Sanchez can score from pretty much anywhere.

Here's to a cracking weekend in D4 - RDS on Friday, Aviva on Saturday; times like these are  exactly why I love harpin' on rugby.  JLP