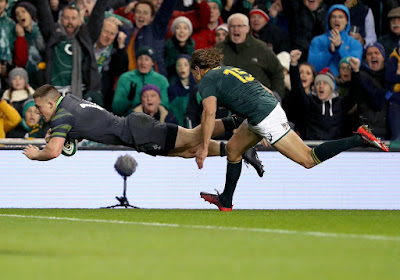 Perhaps 'asphalt' isn't the most inspiring choice of name for a colour, though I actually don't think our latest alternate jersey looks too bad.  But before you start accusing me of shilling for a manufacturing company, I have one important caveat...it doesn't look too bad on it's own.

On Saturday it pretty much failed at what was the essence of it's job, namely to provide an alternative colour when our more traditional one clashes with that of our opponents.  Having said that, the way this particular match panned out, the two sets of players could have all been wearing the same kit and you could still tell them apart.

Most people expected a narrow enough Irish win, myself included.  Yet these predictions are rarely made with the assumption that one of the teams is going to play well below the standard at which you know they can.  And after a particularly humiliating Rugby Championship campaign, these Springboks should have been gunning to put it all behind them.

When I watched it a second time my goal was to try and work out what, if anything, was their game plan, and I think I could actually see what they were trying to do.  Even with the Pro14 now extended to South Africa, they never would have expected our choice of wingers on the day to be Andrew Conway, Jacob Stockdale and Darren Sweetnam - in fact I doubt many Irish fans would have either.

So when planning such a massive contest there's a lot to be said for targeting a position where we selected a trio of players with just five caps between them, right?  And on the occasions the visitors had possession in the early stages, high balls towards Messrs Stockdale and Conway appeared to be the way to go.  I can see the logic in that, but I also see it is missing one key component.

There's no doubt that Joe Schmidt has widened his selection philosophy since RWC2015 but another thing you can be sure of is that he's only going to hand the jersey to players he believes can slot in to his particular brand of rugby.  And while the starting wingers did make a mistake or two along the way, as did the entire XV for that matter, overall it was obvious they were completely clued in to their roles and able to execute more often than not.

And the Springboks' plans started to unravel when the match was barely a minute old.  A deep restart into our 22 was cleared giving them a lineout around halfway.  They threw to the 2nd jumper, which was ambitious since their goal was to ship it to the centre of the pitch, and in fairness they managed to get it to Coenie Oosthuizen who was clearly looking to put his outhalf on the front foot.

Eh, yeah, about that....BOOM!  Irish tacklers were on the tighthead prop so fast you'd swear they were telepathic - and what's more, one of them was another new boy.

Bundee Aki could easily have been my man of the match, and it had nothing to do with me wanting to be proven right about that ridiculous narrative which endured throughout the buildup either.  But while he was in on that tackle of Oosthuizen with Sexton and led that stat for both sides, it looked as though Joe had him focusing on that aspect of his game and thus we didn't see him involved in set attacking plays, which in the end turned our attention more to Conway [my personal choice], Stockdale [a contender had he seen more of the ball] and Sexton [the actual one, also worthy].

Going back to that opening tackle, it brought the South African number 3's day to an abrupt end - no team wants to go to their bench that early but particularly in such an important position, and with the match restarting via a scrum, we saw the other area where we had them under the kosh from the word go.  It was a satisfying evening's work overall from the pack at setpieces with the likes of Iain Henderson and Sean O'Brien also impressing in the loose.

Ironically this penalty was called on our own tighthead side as it was the 'Beast' Mtawarira's elbow finding the turf and this was to provide the first of three early central opportunities which Sexton can convert in his sleep.  A few minutes later it was Lood de Jagr slowing the ball down and a few minutes after that it was Siya Kolisi forgetting the new 'no kicking out of a ruck' law, though referee Ben O'Keeffe also needed reminding.

After each of these penalties, Elton Jantjies continued to put the kickoffs long, and each time we dealt with them - it's like they were hard wired to force us into mistakes and wouldn't give up until we actually made one that led to a try - you can see by the final score how that worked out.

So with their attacks going nowhere due to a one-dimensional plan plus our stubborn D  holding them at bay [their centre de Allende butchering an early overlap didn't help much either], the only questions that were left after the opening stages were [1] could the Springboks reorganise and [2] could Ireland turn their three-point scoring efforts into five- and seven-point ones?

Well the first one was never going to happen and for the second, we also resorted to the high ball.  That is a frustrating choice for many I know, but for me it's a no-brainer when you have Conor Murray doing them - he really has made it into something of an art form.  His ability to both give them hang time and land them on a sixpence means chasers can make maximum hay when they come down.

A perfect example of this was when Skosan got to one but under the onrushing pressure he proceeded to let go for it to fall into the grateful arms of Andrew Conway who had only one thing on his mind, ie scoring in the corner.  Perhaps his outhalf who was in support might have appreciated an offload, though not for the glory, rather to make his conversion easier, but that I'll admit is splitting hairs.

From there we pressed and pressed yet could not improve on the 14-point cushion before the break, and as positive as I wanted to be, I couldn't help but wonder if it would be enough.  Rob Kearney and CJ Stander shipping needless penalties early in the second half brought it back to eleven and any further 'system errors' could have given them the confidence to make it even closer.

Thankfully we were able to turn the defensive screw some more.  If I were wearing Springbok goggles what would have frustrated me most was how passing moves kept getting to the wide channels only to find touch, something that should never really happen at this level.  One or two players like Andries Coetzee and Pieter Steph du Toit looked to be up for a battle but as a team unit they were second best in virtually every category.

So in the final ten minutes, after our coaching had decided who would win the game, it was down to our bench to decide by how much - though our second try was inspired by a superb combination between Stockdale and Conway which got us deep into the Springbok 22 until eventually it was Rhys Ruddock, unlucky not to start though I suspect he may be skipper next Saturday, who got it over the line by sheer will.

For rugby nerds like myself that finally brought us over the 15 point margin which would maximise our ranking points, but the Boys In Asphalt weren't done yet.  Having won our umpteenth penalty at the scrum we put the ball deep into their 22 where it was simply done from there...lineout > maul > reserve hooker Rob Herring falling over the line.  31-3 and the final insult, right?

Nope.  That honour went to what happened at the very end, and I know it will infuriate South African fans for me to go into this kind of detail, but I reckon it's needed to show just how bad a day at the office it was for them.

As the visitors fed an attacking scrum outside our 22, the clock read 79:26.  Surely the only score that could possibly result from this situation would be a consolation try for them?  Instead, much like that thwarted move back in the first minute, this one in the last went nowhere and suddenly we were on the attack yet again.

With five seconds left in regular time, Joey Carbery, on for Sexton at outhalf despite not having played there for Leinster all season, sent a crossfield kick into an area for sub winger Darren Sweetnam to chase and somehow the former Cork hurler manged to gather and not only keep it in play, but also hold up would-be jacklers long enough for support to arrive.

And boy, did it arrive - a ready-made attack formation which swept the ball from one touchline to the other with Conway and Stockdale combining once more for the Ulster youngster to deservedly cross the line and we weren't even done yet - an excellent conversion from out wide by Carbery provided the the caramel drizzle to the cherry to the icing on the cake.

Hopefully I come across as genuine when I say I don't take pleasure in seeing South African rugby in such disarray.  That said, I don't think that alone is a reason for them to host the 2023 World Cup!  But it's looking increasingly likely that this is out of our hands at this stage and our immediate focus must be on the one in Japan in 2019.  Did this match tell us much about where we stand?

I'd say it did - bad and all as our opposition was, it was a decent effort for a squad that not only just got pieced back together after a Lions tour but also had some new faces showing they too are well clued in to 'Schmidtball'.  We'll only know for sure after we see how they get on in the next two weeks.

No doubt there will be some changes for Fiji but I'd be inclined to reward this achievement by naming the exact same matchday 23 against the Pumas in our final November test, injuries permitting.  But for now, this comprehensive win is definitely a result for us to savour.  JLP