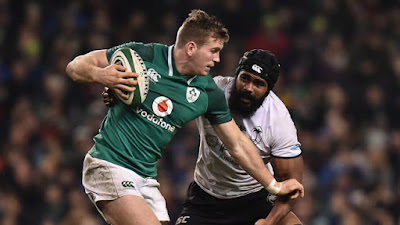 When we share our match writeups on social media, the posts that go with the link normally follow the same format - 'Our [match in question] writeup is titled [title in question]'.  On Facebook last week, a reader commented : 'Seems to be very important to know what the article is titled 😁' to which I replied : 'You have no idea 😁'.

It's true - formats are important to us here at Harpin Manor.  For each match the mood, occasion, opposition and often venue might be different, but having a certain framework gives the article a starting point, and I try to put some thought into the title that can hopefully bind everything together.  This week, I have chosen the number thirteen to do just that.

2013 - was the year Joe Schmidt took the reigns of the Irish squad after yet another trophy-laden campaign with Leinster.   A bit like our writeups, his style of coaching is one that relies heavily on templates; in fact legend has it that for one of his final matches with the province, namely the Amlin Cup final, he told his players that 'if you perform these set moves, you will score tries'.  Which they duly did.

THE 13 JUMPER - BOD was about to embark on his 'one more year' as Joe took over, which gave him time to work out a puzzle that had snowballed over the season leading up to it...how do you replace him?  He eventually landed on Jared Payne, with Garry Ringrose not far behind.  Deprived of both for this November series, he went with Robbie Henshaw against the Springboks and gave Chris Farrell the honour against Fiji.

CH- CH- CH-CHANGES - Over and over again we heard about the number of alterations to Ireland's lineup for this match.  Joe wants to try out new players to grow his squad for the 2019 World Cup, and the nature of our opposition next weekend serves as a reminder as to why he feels the need to do this.  No doubt that amount of change is going to make it difficult for a team to gel, particularly if they haven't played together much.

4 + 9 - This one is a bit of a stretch but I do have a point to make.  13 is what you get when you add Saturday's teams' ranking positions together.  As well as the amount of changes, we were constantly reminded that Fiji are ranked in the World's top ten, like that was some kind of caveat.  Well if we are to consider their lofty position, why not ours, which is now in the top four?  Is that not a perch from which we should be looking up rather than down, especially since our next Holy Grail is a World Cup semifinal?

After my tweet at full-time was mostly negative I got a reply of 'Play new players everyone says, Joe does and Ireland win and ye still aren't happy 😢😢😢'.  I take the point, I really do.  But for all the caveats and narratives in the world, I still have to classify this as a poor 80-minute display from Ireland, and I just have to hope that people realise that I mean that in a constructive way rather than a curmudgeonly one.

The reason I say it's poor is that I know that Joe plays to a particular style and from start to finish we struggled to comply; areas of the game where we should have been comfortable were anything but.  This was apparent right from the opening kickoff when Ultan Dillane was lifted into the air only to see it sail over him - from there we tried to tidy by forming one of our 'organic mauls' [not an official rugby term, just what I call them] only for the ball to be sloppy and shortly afterwards we had the first scrum which we also won yet again we made it tough.

What about the first try?  Lineout, phases, Carbery spots a mismatch against their loosehead and sails by, firing a perfect long pass to Sweetnam who finishes in the corner.

And what about the second try?  Crash ball gets us into 22 before superb acceleration from Conway makes the most of an overlap putting Dave Kearney over in the opposite corner.

And what about the third try?  Good pressing after a Fijian scrum forces a knockon which allows Jack Conan to scoop the loose ball and run all the way in, deviating his line to avoid Nagusa in the process.

Decent scores all, and if you only saw them as the match highlights, you'd be impressed.  But the third was to be our last, and what's more, we allowed them to get back within seven points before the break despite having possession in their 22 as late as the 39th minute.

What I'm looking for most of all from a Joe Schmidt XV is a strong defensive outing, particularly from positions 10, 12 and most importantly, 13.  There's an element of risk over reward in the strategy of spotting where the opposition are going and jumping out quickly to shut it down, and we got much reward last week against a team ranked higher than Fiji and held them to just three points.  And while Messrs Carbery, McCloskey and Farrell did well with the ball in bursts on the day, their lack of playing time together was laid bare for Fiji's first try.

There's no doubt the Fijians are extremely good in open play, yet while Nadolo did extremely well to make something out of nothing up the touchline before putting in his scrum half through to score, I'd argue that prior to that, our outhalf and centres had each committed themselves to tackles they couldn't finish which allowed safe passage for the ball into that wide channel.

In defence of their defence, there weren't a lot of tackles to be made on the day -  we enjoyed about 70% advantage in both possession and territory - though if anything that could make Senioli's try stand out even more in the infamous DVD session.

OK now I'm imagining my readers doing a Mexican wave by this stage of the writeup.  Yes, I'm being technical and negative, so I can't blame you, but my argument is - so was the match.  Just a little bit more, I promise, then I'll move on to the positives - yes, I did see some!

In the first half, I felt our forwards in particular were playing as individuals rather than a pack.  Restarts, mauls after lineouts, even the breakdowns were very problematic for us - yes, I know players are trying to put their hands up for selection in other matches but again, I'm just reporting what I saw and the Fijians really put it up to us mostly by playing as a unit.

After the break, we just couldn't get it together with the ball, with Dave Kearney's intercepted pass the most costly error, yet not the only one.   And I hate to single out Dillane again but his second misjudged restart led to Fiji levelling the scores right after we had edged back in front.

Often with these matches we tend to 'big up' players from our own provinces more than usual so I admit my blue goggles might be at play for this next bit - still, I thought Kieran Marmion didn't play well enough to deserve a 77-minute shift, though that might have been agreed beforehand for some reason.  Luke McGrath executing a perfect box kick with what was pretty much his only opportunity underlined this notion.

Right - I'm finally done with the Irish negativity, and to be fair, we fell way short of the predicted winning margin by bookies and bloggers alike due to more than just our own failings...referee Paul Williams played a part as well. 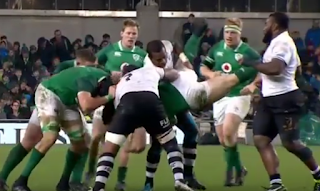 In the first half a strong case for a deliberate Fijian knockon was ignored and there was a harshly-called penalty or two against our players but they can be put down to my bias so I won't elaborate...however his call of 'penalty only' for the tip-tackle on Cian Healy was way, way wrong.  I was reminded of the phrase 'If you tilt your head and squint your eyes...'  because that must be what he did to determine that the prop wasn't beyond the horizontal, and the TMO's 'er.....well, OK' meant pretty much everyone else in the stadium agreed.

Absolutely no guarantees we would have scored with an extra man in those final stages but it was such a poor call that it has to be mentioned.  But just like my views on the display from Ireland's 'newbies' - the ref is relatively new to the test arena, it's good to learn from mistakes, and he will no doubt improve.

On a positive note for Ireland, Andrew Conway was hands down our man of the match, and if fit should be rewarded for the past two matches with a spot in the 23 for at least the next two.  I'm delighted to see him doing so well now [yes, even for Munster] as he was a promising talent right out of school.

And let's mention Joey Carbery again - I am in no doubt that he has a role in the Irish set-up, it's just his style needs to grow around Joe's and thus he'll need game time in green to allow that to happen.  Fingers crossed the injury he sustained wasn't too bad [update - the diagnosis was not good] and an honourable mention must go to Ian Keatley who did well enough in his stead to steer us home, including the decisive penalty.

From the subs bench, when he wasn't being dumped on his head, Cian Healy clearly has his mojo back and has surely claimed the starting 1 jumper back for himself; isn't it great to see a battle royale for it - you can be sure McGrath will be back and hopefully nobody is forgetting Dave Kilcoyne in the mix as well.

A final nod to Fiji for their display - coach John McKee had them well prepared for this one and they looked a much better side to that which played Italy a week earlier.  We can certainly put them up there with the likes of Georgia as a nation that must at least be close to breakong international rugby's glass ceiling to play in top annual competitions, and ironically their ranking has them above both Italy and Argentina, the last two who did.

We can only assume that things will be back to 'normal' squad-wise for Ireland's final match against Argentina because it will important for us to finish this series with a return to the kind of form and accuracy we saw against the Springboks.  Time is ticking in the buildup to RWC2019 - you know how many competitive matches we have before it kicks off?   A clue is in this post's title.  Isn't it mad how that worked out?  JLP