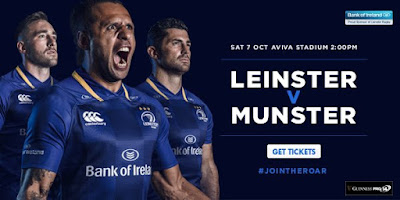 It's a shame the match won't be graced by two out of the three stars in its promo photo.

It's a shame the match can't be played in Leinster's regular home of the RDS.

It's a shame the match has to kick off at a Saturday hour when normally  many are just peering out from beneath their duvets [not me though...parent of small kids, say no more].

And yes, it is also a shame we can't smuggle tinnies bring bags with us into the ground anymore.

But even if I didn't appreciate the reasons for all of the above, I'd still put them aside in a heartbeat because, well I mean come on...it's obvious innit...it's Leinster v Munster!  Do you really need any more than that?

All thoughts about the Pro14, conferences, playoffs, match points, Europe, even the performance are forgotten for fixtures like this.  We'd just like our guys to end up with more points than their guys, if you really wouldn't mind.

But say we did care about a decent Leinster display...what would that look like and is this the best XV to do it?  [I just realised I put that question in such a way as you might think I'm going to answer no...spoiler alert, I'm going to say yes...just]

I reckon we could safely say that more than four out of five European clubs would be more than happy with four wins out of five to start a campaign, but not these two.  The trophies might not have been plentiful in recent years but we did both reach the RCC semifinals last season, and standards need to be high if something similar lies ahead.

Hand on heart I haven't been able to watch much of Munster so far this season, but I know enough about them to be sure the one I did see in full in Glasgow won't give much insight for tomorrow.  So at the very minimum, the shortcoming that have been consistent in Leinster's outings over the past five weeks need to be left behind.

First up for hopefully the chopping block is our leaky centre channel.  Many will raise an eyebrow that Rory O'Loughlin has retained his place....a tackle or seven have been missed and this often stems from jumping too early out of his line.  However, as I have said before, this could improve with a more experienced man wearing 12 - and while he may not have Isa's years, Robbie Henshaw has definitely seen many big matches like this in his short career and is a very welcome returnee to the squad, though there will be no time settle in.

Next we have the lineout.  I harped on this quite a bit in the Edinburgh writeup so for this preview I'm going to leave you in the hands of HoR contributor Chris McDonnell who left this comment on our Facebook page today - obvious perhaps yet still apt given our recent woes in this setpiece :


"Our forwards should get in a huddle and decide who the lineout is to be thrown to (one of the taller lads would be my suggestion) get someone to tell the hooker who he had to throw the ball to, then get two players to lift the chosen player as high as they can while at the same time the hooker throws the ball to him while he's 7 or 8 feet in the air!  If we start with that maybe just maybe we might win the odd lineout."

Finally a word on the two back rows.  As preseason began I selected my ideal 678 combo for Leinster in big matches like this one.  All of them are injured while the trio I would have picked for Munster, POM, TOD and CJ, start for Munster.  That certainly doesn't mean Rhys, Josh and Jack need have too many fears for tomorrow's breakdown battle, however, and as often is the case, it could well be where the match is won.

A word on the referee...Ben Whitehouse has taken a lot of stick from many quarters but not really from me - yet.  This is a big stage for him to show what he can do.  If he doesn't get a grip of the game early no doubt the shouts of 'Where's Nigel?' will ring out across the Aviva.

The bookies are going for a home win by six points.  I can't even begin to be that optimistic;  I reckon the lead will change hands quite a few times but the stronger blue bench should make sure we have it at full-time but only by a narrow margin, a penalty at most.

If you're around for a pint after the match pop into the Sandymount Hotel and say hello as we watch the Springboks try to win back some pride against the All Blacks.  If not, here's to the occasion being its usual rugby-tastic self.  JLP