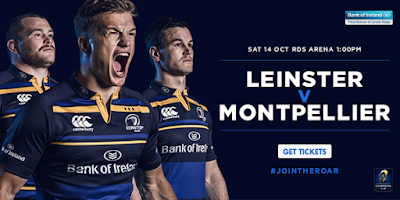 "Garry Ringrose receives the ball inside his own 22 - he could put in a clearing kick, but instead opts to run.  Six phases, which include more impressive carries, later we lose our way a bit just inside the Montpellier half and they recover.  Francois Steyn puts up a high kick which Isa tries to take but instead knocks it forward.

But the visitors aren’t interested in the scrum...they charge ahead with some strong running and neat offloading of their own which threatens our try line before a pass goes straight to Jack Conan, who turns and sets up some exit phases.  At one of the breakdowns we earn a penalty, a great chance to clear but we instead opt to tap and go despite being in our own 22.  We get the ball quickly out wide to Adam Byrne who finds a bit of space before being bundled into touch."

All of the above high-tempo action happened between the kickoff and the second minute mark back in January when Montpellier played at the RDS. By the 27th minute we had two tries in and a 14-3 lead. By the 28th we had an extra man for the rest of the match as Francois Steyn was sent off for a high tackle on Sexton which led to his infamous 4-minute HIA. By the 70th minute Jack Conan was completing his hat-trick and by full time we had completed a 57-3 route which helped us clinch a spot in the quarterfinals.

I think it's safe to say that the match in January tells us nothing about the match we are looking forward to on Saturday. Take your pick as to the reasons the Top 14 will be different this time around...it's the opening match of a new campaign, they've Vern Cotter pulling the strings now, and they've a host of new names in their ranks like Ruan Pienaar and Louis Picamoles.

But it's names who are missing from the starting lineups that represent their biggest talking points. When this was announced as the opening fixture everyone relished the Johnny Sexton v Aaron Cruden battle at out half yet both miss out due to leg injuries, leaving youngsters Ross Byrne and Thomas Darmon in their stead. In both cases there were other options [Carbery and Steyn] so great faith is being shown in the pair.

Maybe it's just that it's not only Friday the 13th but also the Halloween decorations are going up around the neighbourhood, but Leinster's matchday lineup gives me an unsettling feeling.

Not so much in the pack, mind you...you have to like the continuity after a derby win at the Aviva where the defence was solid and the lineout blips seem to have been sorted, more of the same please.

But when it comes to the backs, it's not the the Sexton thing that has me jumpy - as happy and all as I am to see that Isa has returned, I get the impression that Noel Reid is on the bench 'just in case' and overall our 21 to 23 don't strike me as a group who could make a major impact if required, especially when you compare them to Montpellier's equivalents.

To address the elephant in the room, or should I say the Tasman Mako which isn't...when we heard that James Lowe was coming to the province this was precisely the kind of match we would have wanted him for. Yes, I know, not entirely in our hands, but I'm just saying perhaps his name in the 23 would make me less wary.

Look...that's enough negativity for one preview. I still think we're going to nick this one, but I have a feeling it's going to be even a tighter margin than the five projected by the bookies. I'm counting on our pack and 12/13 channel to keep our visitors' score down enough, plus our setpiece, at least on our own put in, to be reliable enough, to have us on top by 1 to 3 points by the end. A far cry from January's 54 but I'll take it!

One thing's for sure, this is going to be one hell of a pool. We may be the only club to have reached the semifinals last season among the four, but Montpellier splashed the cash, Exeter are reigning Premiership champions and Glasgow are 6 for 6 in the league. It's likely to take six full matches at the top of our game to get out of it, and I can't wait to watch us have a go.

Here's to a cracking contest, albeit at an even more inconvenient kickoff time than last Saturday. Hope to see you at the RDS and that the roar gets joined by all! JLP

PS Best wishes as always to Ulster and Munster in their Champions Cup campaigns, to Connacht in the Challenge Cup, and of course also Leinster A in the British & Irish Cup.