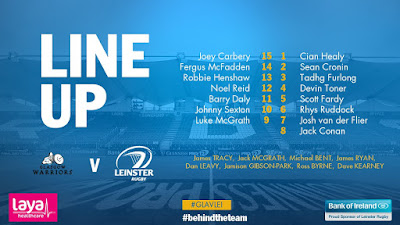 In my writeup of the win over Montpellier I harped on sporting clichés and as I sit down to scribble this preview, another one springs to mind...'too close to call'.  And I don't just mean with regard to this match either; it actually applies to all of Pool 3.

Both the Top 14 outfit and Glasgow will be disappointed with their opening displays - even the most hardcore Leinster fan wouldn't have expected a try bonus point while a late try from Exeter's powerful number 8 Sam Simmonds denied the Warriors a losing bonus point they arguably deserved.  So it's very possible the four teams could be locked on one win each when the weekend is over, with all to play for in the December 'back to back' series.

Still though, this is a decent side we're sending across the water.  We may have lost 'Visa' Nacewa, but we have re-gained Johnny Sexton who christened him with the name [though we claim to have helped here at Harpin Manor] and overall it's an impressive lineup.

Noel Reid's presence at 12 may raise some concerns on the defensive front but I suppose with Robbie Henshaw, who has shown he can do the work of two tacklers, outside him there should be enough cover and the out half isn't too shabby with the tackling either.

Speaking of defensive shortcomings, it's interesting to see Adam Byrne missing out on the 23 altogether.  He has been heavily involved in our attacking game in recent weeks with several positive contributions but for this particular battle it seems to make sense to have the more experience McFadden on patrol.  Meanwhile over on the other wing it's the oft-scoring Barry Daly whose composure in finishing has been immense this season.

In the pack, James Ryan did well last week and earns a spot on the bench as he makes way for new daddy Scott Fardy who rejoins Devin Toner in the engine room.  A couple of tweaks to the front row shouldn't hurt us while it's great to see Dan Leavy back from injury and it speaks volume for his value to the squad that he is called on for Europe.

As for the Warriors, I have watched them quite a bit this season and while they will definitely welcome back Stuart Hogg from his layoff following his bizarre brush with Conor Murray's elbow, with the exception of Saturday in Exeter they haven't done too badly without him.

Finn Russell knows full well the kind of organised defence he'll be facing and when his forwards rumble through the phases to lay a platform, he seems to have several different tricks up his sleeve.  Many of them involve a lot of risk but they look amazing when they come off.

But for me their danger man is Callum Gibbins, an openside acquired from Super Rugby's Hurricanes.  His tends to finish attacks for both sides, scoring tries for his own and jackling turnovers denying the opposition.  I know we're not exactly lacking in the backrow department ourselves but he is definitely one to watch.

All of the above points to a see saw of a contest and it appears much will depend on which out half can impose their gameplan the quicker.  Hopefully referee Jerome Garces won't be a factor but these two may cancel each other out so much it's very possible.

The bookies all but agree that it's too close to call, though they plump for the home side by a point.  It probably won't surprise you that my prediction is going to lean the other way by the same margin, but the way this pool seems to be shaping up Leinster will need to stay focused throughout to come away with match points from Scotstoun.  JLP

PS - Also on Saturday there are matches of interest to Leinster fans either side of the match in Glasgow...in the morning new signing James Lowe lines out on the wing for Tasman Makos in the Mitre10 Cup semifinal against Taranaki...then in the evening the 'A' side host Cardiff Blues in the British and Irish Cup in Donnybrook - if you're not travelling to Scotland I strongly recommend a trip to D4 we've a great mix of fringe first team players and academy prospects.  But if you can't make it and want to keep in touch, we're planning a liveblog so by all means tune in.