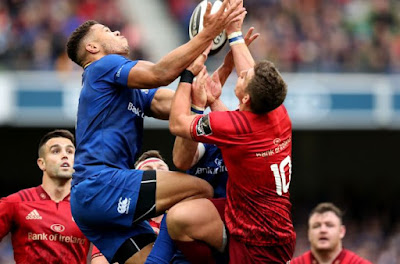 So it's early in the second half and Joey Carbery sends a grubber up the touchline.  It seems to be heading straight to Conor Murray, yet just as it reaches him, it takes a high hop over his head and ends up finding touch in the Munster 22.  A small victory for Leinster, but a victory nonetheless and it was met with an ironic cheer from the majority of the home fans.

Meanwhile, my own reaction up in section 317 wasn't ironic...'pathetic' comes a lot closer!

To say 'I spilled my drink' would do the incident a gross injustice.  The pint [which was my first of the day I must point out] didn't so much fall to the ground; it was more like it exploded.  I was sitting in the front row of the second tier, and I think what happened was that the [thankfully plastic] container brushed against the rail before me, making me panic thinking it might spill, which in turn actually guaranteed the nightmare became a reality, in dramatic fashion to boot.

Luckily the glass stayed in my hand and the lower tier seemed to be spared a shower of J Arthur's finest...somehow the damage was confined to the ground in front of me, those within the blast radius [sincere apologies yet again if it was you], and of course, all of my blue garb.  Naturally my skin turned Munster red and my companions wouldn't let me forget it for the rest of the day, which was strange because if the roles had been reversed, I would have managed to keep quiet about it.  #ahem 🙄😜

Why have I harped on this to start the writeup?  Well, partly to defy one of the lads' quips of "I bet you won't blog about THAT!!!", but mostly because with the possible exception of the 79th minute onward, it was arguably the most exciting thing to happen for the entire match.

Now don't get me wrong - I made it clear in my preview that winning came first and it has to be said that even before we opened the scoring, even when Munster pulled level with a man down, and even when they got back within six in the dying moments, there was an air about the contest that the home side were in control and we could find a score whenever we needed to.

So I was a happy Leinster fan at full time and as I left the Aviva in search of a drink I might actually finish, for the second week in a row I was questioning the awarding of 'man of the match' to Johnny Sexton.  He wasn't bad, I thought, but was he really the best?  Then I watched it a second time at home.  In actual fact his performance was more deserving of the American version of the award, namely 'Most Valuable Player'.

Munster had three recognised outhalves in their starting lineup - Keatley wearing 10, Bleyendaal 12, and JJ Hanrahan 15 - yet for the 80 minutes Sexton showed more tactical nous [I normally hate when pundits use that word but it fits here] than the three of them combined.

Because whatever about the visitors' shortcomings with the ball, without it they were an extremely tough nut to crack...a stubborn defensive cordon we've become used to in Irish professional rugby.  Yet from my vantage point, behind one set of posts rather than my more usual one on the touchline, it was interesting to watch the record Leinster points scorer at work chipping away at them.  It's not just improvised rugby tactics...it's actually more like precision choreography.

If anything on Saturday I think perhaps we went for the 'fancy' option a bit too often in the same sequence, not least of which when one pass went a fraction off kilter seeing the ball land in the grateful arms of Ian Keatley to run back for a score.

But when it worked, it was a thing of beauty, most of all for our second try as Sexton executed his trademark 'wraparound' via Tadhg Furlong to Carbery and finally Rory O'Loughlin crossing for his second, having spun his way to give us the lead earlier in the half.

And it wasn't like the backline moves were the only strings to our bow either.  Both Sexton and his fellow halfback Luke McGrath unleashed a barrage of high kicks, each exclusively targeting the right wing for Adam Byrne to chase...more often than not they came back on Leinster's side.

Then there was our defence, where Sexton also showed great leadership [still don't think he should be captain though].  We may not have had as many tackles to make as our guests, but we were taking more risks, often for rich reward.  And it wasn't just the backs keeping Munster at bay; our back row were up against a quality trio and did extremely well especially Josh van der Flier.

Elsewhere throughout the Leinster lineup it was great to see the younger players doing well - Rory O'Loughlin has had a tough time of it lately on these pages but as I hoped, having Henshaw patrolling the 12 channel definitely helped.  There's no doubting his abilities going forward as his brace of well taken tries proved.

Then there was Carbery - once again he punished his opposition for failing to find touch, which was often.  With all due respect to Ross Byrne however, I think it's a shame the Auckland born lad can't be used at least as our backup outhalf - this would free up space on our bench for an extra back three option or sometimes an extra forward.

Now to the visitors...I often praise Keith Earls whether he is wearing red or green and there is no doubt he is a quality player.  But though I know this won't be a popular view, I don't agree that his display represented a 'return to his world class best', a claim that whizzed by  on my Twitter timeline.

He did touch down three times, yet for the one that was disallowed, I thought it was his positioning that caused the forward pass which saw it called back [eventually].  Also in all three cases, whether he got across the line by his ability or Adam Byrne's own positioning I reckon is very much up for debate.  The Leinster 14 was a valuable asset when it came to reclaiming all those high bombs, yet he seems to have a lot to work on when it comes to the defensive aspect of his game and I'm wondering would those tries have been finished as they were with more experienced cover.

I'm not trying to take too much away from Earls, it's more that I felt that Munster's best performer on the day was someone else, namely Tommy O'Donnell.  When Niall Scannell saw yellow, the flanker would have known he'd be sacrificed at the next scrum so he set about making up for it by tackling everyone in a blue shirt he could find...he finished with 19 overall, 7 more than anyone else on the pitch, and of course he also found the rare gap in Leinster's own tacklers to charge down the pitch to help set up their second try.

Towards the end I thought Munster made a couple of bad decisions when Wooton didn't call a mark and in that final scramble as the clock turned red, Marshall went for a quick tap penalty in his own 22 rather than use the new rules which could have meant a lineout around halfway.

But I should probably leave my critiquing there in case Peter O'Mahony is over my shoulder!  [On that interview - valid question but at the wrong time and from the wrong person IMO]

Inevitably when these big derbies take place there are questions chucked around regarding the ref's performance.  While I don't think Ben Whitehouse had his best day with the whistle, when it comes to questionable calls or non-calls, the honours seemed more or less even.

Yes, Sean Cronin's deliberate knockon looked like a yellow card as Scannell's had, yet what about Farrell giving his arms a rest while clattering Henshaw not long before.  And yes, Leinster shipped a succession of penalties in their own 22 which could have courted yellow, but then again, as we were berating O'Mahony's  bootlace-tying while a man down, the penalty he had just shipped for taking down a maul came moments after a warning for something similar.  So overall, no net injustice that I could see.

And look how far we are down the page before I even mention the Leinster lineout!  Our first one got pinged for a crooked throw but as each subsequent dart was thrown, they looked more and more confident.  This isn't a fact that should be met with praise, rather relief.  11 successful darts from 12 is a minimum standard for an outfit that relies so heavily on set plays, but credit to James Tracy, Devin Toner et al nonetheless.

So overall a satisfying enough win for Leinster, and while we now lie third in our conference, it is clear that things are shaping up for a three-way battle between us, Scarlets and Ulster for top spot and the home semifinal that comes with it, with possibly Edinburgh keeping everyone honest throughout.  The opening six weeks of the new-look league have gone pretty much as expected...much entertainment with much confusion thrown in as well.

But now it's time to step up a gear, and hopefully names like Nacewa and O'Brien can creep back into our lineup.  As I have stated several times in recent weeks, the big matches keep on coming.  Glasgow are unbeaten this season; we face them twice either side of a trip to Belfast later this month, and to kickoff our latest European campaign, there's 'only' Montpellier's star-studded squad coming to the RDS next Saturday.

I'll be back to my more familiar spot in the press box that day, and to all those seated in the rows just below, don't worry - I'll be sure not to have any kind of liquid refreshment with me for the duration... JLP

PS - Best of luck to Martin O'Neill and the boys in green tonight...there certainly doesn't have to be World Cup qualification on the line to get Irish rugby fans wanting to see an away win in Cardiff!!! #COYBIG