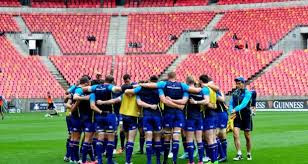 Leinster playing a team wearing red and black in a massive stadium before a handful of spectators is nothing new to this league, only it used to happen a lot further north, the Scottish capital to be precise.

So in some ways I'm not altogether sure we should be too judgemental about the profound lack of bums on seats at the Nelson Mandela Bay Stadium on Saturday, and the Scots certainly aren't the only ones north of the equator to have similar issues.

Plus, we have to appreciate that it's going to take a while for the local public to get used to this new competition.  Not only are they already getting a steady diet of Currie Cup rugby this time of year, the 46,000-seater arena is also home to Chippa United from the premier SA soccer league [they played the previous Tuesday in front of a reported crowd of over 6,000] - to expect them to just show up in droves for extra games hastily dropped into the sporting calendar is nothing if not naive.

Do we get sellout crowds at Ireland's women's and Under-20 Six Nations matches when we schedule them on the same weekends as the senior men's team?  Or Ulster Bank League matches that are scheduled at the same time as the provinces are playing either at home or on the telly?  There does exist a saturation point at which fans are prepared to part with not only their cash, but almost more importantly, their time.

Of course this writeup should be about rugby and I'll start harping on that shortly - it's just that with the one-sided nature of the contest it's hard to avoid the crowd size being the biggest talking point.  And with a few 'harrumph merchants' not approving of the changes involved in bringing these two clubs into the league from the get go, I want to point out that the arrangement needs at least a year before we can even begin to assess how it's working out - events in Port Elizabeth on Saturday prove absolutely nothing IMO.

Right, that's more than enough on people who didn't show up in the real sense - what about those who did in the sporting cliché sense?

Well, looking at the league tables [or 'logs' as they call them around Port Elizabeth], after three rounds we are the only team with 15 points out of 15, we have the second-highest amount of points scored [behind the Scarlets who got to play these Kings in Llanelli] and we have the best defence.  I'm not using those stats to say we're perfect by any means, but let's just say my starting point has to be with the positives.

First and foremost we have to appreciatet just how young this matchday 23 was.  Apparently Isa wasn't slated to play here anyway so his unfortunate extra air miles weren't a factor - and with Nick McCarthy flown in to join the bench, there was relative inexperience all over the park.  With that in mind, this result and performance have to be put down to two things...their collective ability, plus the quality of our coaching.

Perhaps our lead could have been more at halftime but I'll harp on that in due course - the boys in blue came out showing the time in the dressing room was well spent.  All of a sudden each carry into contact was accompanied by at least two in support to clear out.  The determination to up the tempo and keep the ball moving was apparent across the team.  Quite simply, they got together, worked out a plan to beat these guys, and set about doing it.

With that they were richly rewarded with literally try after try after try.  Rory O'Loughlin crashes over after 42m.  Jack Conan after 48.  Joey Carbery wraps up the bonus point just three minutes later.  Just like that, the job was done, and icing was applied to the cake with a fifth from Dave Kearney in the closing stages after a neat wraparound move involving Cathal Marsh.

And the reason we knew the job was done is that for yet another week our defence was impenetrable when it mattered most.  There's a YouTube clip of the highlights below but if you get the chance I suggest you watch the full match with the local commentary [normally I'd share the link via Harpin social media but I don't want to draw too much attention to the channel in case it's shut down!] - from start to finish their analysts marvel at how the Kings kept trying and failing cope with our organisation and line speed.

Individually, it might be my Loose Head Union membership talking but Ed Byrne impressed me the most. Trusted with many carries including one that led to Noel Reid's early try, kept up his side of the scrum, ranked high on the tackle count charts. Sure, he could do with being tested against better opposition, but for this time of year his display makes me feel a lot more at ease with Peter Dooley being unavailable.

When it comes to the backs I reckon Noel Reid shone the brightest. Also high in the tackle count and while he may not have the strength of Isa carrying the ball into contact, he finished his try well and also has an ability to go around would-be tacklers.

Luke McGrath will no doubt go back and rue a couple of box kicks that weren't up to scratch [the South African commentators were perplexed by the way our 9s do our exit clearances, something Irish fans have come to take for granted] but overall he showed why he is indeed our first choice scrum half and he was key to our upping the pace in the second half.

The scrums were overall a positive too...one or two penalty calls but while I didn't think Ben Whitehouse was as awful as many are claiming [he's still carrying the load for a disastrous penalty try award against Connacht in the past I fear], he was perhaps a bit too finicky when the forwards were packing down. In general we seem to be squaring up well so far no matter what front row trio we have on the park.

But like I said, the display was far from perfect overall, and the lads will know that. Can't begin anywhere but the lineout, and to make my point I'll go to the four second half tries. All came from penalties won at midfield which were then kicked to the corner. From there we were well set to maul, crash, roll through phases and pass our way to five points each time.

To accomplish all of this, a well-functioning lineout has to be taken for granted. How can you focus on what you'll do with the ball if you're not sure you can even secure it? With this already a well flagged issue for us, and the match not even a minute old, a throw in a decent position went awry for us. The biggest message for us from this opening rounds of the Pro14 is that simple errors can be covered up against opponents like these, but not when it's the likes of Ulster, Munster, Scarlets, Montpellier, Exeter, Glasgow...

One Leinster player who did not have a good day at the office was Rory O'Loughlin. That might sound strange since he scored a try but I can assure you that is furthest from his mind right now...the statisticians tagged him for seven missed tackles and watching the match back you can easily spot most of them, especially one where Kings outhalf Oliver Zono sprinted around him in the lead up to their late consolation try.

Speaking of the Kings I should really mention their performance. Their record in the Guinness Pro14 is the polar opposite to ours and overall you can see why. But while there was some horrific tackling at certain points, particularly during our purple patch, they definitely deserve credit for at least giving us a serious problem that needed fixing at half time. Had we not made our changes their jacklers would have continued thwarting us at the breakdown all day long.

And it was very much to their credit that they took a quick tap on 29 minutes when awarded a penalty in a kickable position...many would have opted for the 'easy three' but they appreciated this was an opportunity to get at us before we could set our defence. In time, this kind of attitude can certainly reap some reward.

If, like me, you're apprehensive about our quality of opposition on the way to our 'perfect start' then I suggest you have a look at the rugby that was on show at the Kingspan on Friday night as Ulster edged out the reigning champions the Scarlets. It looks like a real scrap is in store for the playoff spots in Leinster's Conference B, that's for sure.

So there we have it. A crowd with an off season mindset, watching a home team with a pre season mindset outplayed by a visiting team in an early season mindset. It's going to take this five-nation tournament time to find itself properly in sync, yet soldier on it must and I'll be more than happy with a carbon copy of this match when we play in Bloemfontein on Friday. Who knows - maybe the Cheetahs' 8-try showing against Zebre will lead to more showing up on the night. JLP