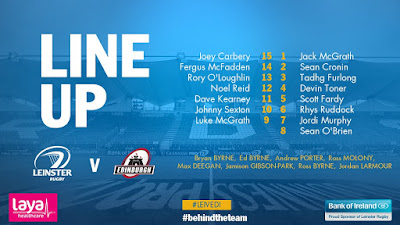 Johnny Sexton, Richard Cockerill, Edinburgh...three names which bring back memories of a very happy and historic day for Leinster Rugby...come together once more tonight at the RDS Arena.  We even have a famed Wallaby number 6 in our ranks these days as well, but he's playing in a different position now so I should probably quit while I'm ahead on the comparisons front.


A feature of my writeups so far this season has been the composition and performance of our starting centre pairing.  Ahead of the Cheetahs defeat I was happy to see Isa returning to 12 yet he was forced to exit the game early, which left us with Noel Reid and Rory O'Loughlin, whose relative defensive shortcomings probably cancelled out what they offered with the ball.

Well, they have been reunited for this Pro14 contest, that is true.  But just look who will be out there with them.  The pack alone averages over 30 test caps each and isn't a million miles off our best.  There's also experience on the wings, there's youth and flair at both 9 and 15, and did I mention Sexton?

But let's just rein things in for a moment.  Many Lions may have returned, but after last week we can't afford them too much mitigation for a slow start.  We need them to hit our visitors early, we need to put points on the board, and we need to maintain our defensive shape as well.  We've a relatively young bench so frankly every starter should see that as a motivation for getting the job done themselves.

This is why I'm going with the bookies' 24-point spread as a challenge rather than a prediction.  Embra have had very mixed fortunes so far this season, winning in Cardiff on opening day [after which 'Cockers' is reported to have said 'never doubted it - this is how we play'], then beating the Dragons at home before dropping to Treviso and Scarlets in recent weeks.

Anyone who knows anything about rugby will know you underestimate a team led by the former Leicester and Toulon coach at your peril, but as is often the case with this Leinster team, it's more about focusing on what we do.  We have more than enough ability out there to compete up front and keep the levels of front foot possession up there where J10 likes them.

There's a certain setpiece that Leinster have had issues with for quite a while now...I'm going to treat it like the bad guy in Harry Potter and hope that failing to mention its name acts as some kind of good luck on that front tonight.

You can probably tell from harping earlier I also see the 12/13 channel as a potential weak spot for us, but nothing would make me happier than to see one or both of them making the right kind of headlines tomorrow morning.

I'm going to list our upcoming fixtures for the umpteenth time...Munster, Montpellier, Glasgow [RCC], Ulster, Glasgow [Pro14].  Those battles will look all the more daunting if we can't produce the goods tonight. So let's get ourselves to the RDS [tickets still available] and show the boys in blue we're right behind them.  JLP