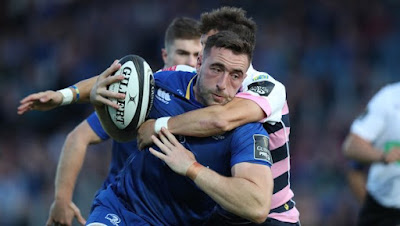 It's early September, Leinster Rugby is back at the RDS, the rain has stayed away, season ticket holders have welcomed back familiar faces around them as well as collecting their annual free stash, this time with the nice touch of players like Robbie Henshaw doing the handing out.  Then the boys and blue go on and clinch a second bonus point victory in as many weeks to make for a perfect start to the new-look season.

What on earth could anyone possibly find in all of that to complain about?

OK, perhaps we weren't saying that after 30 minutes when 0-6 down and absolutely everything was going wrong for us with the ball, the vast majority of it our own doing and I was reminded of that nightmare against the Dragons in 2015.

And perhaps we weren't saying that after 60 minutes when, despite having gotten ourselves 16-9 ahead at this stage, the errors were still happening and the visitors had good attacking ball deep in our 22, looking to all intents and purposes like they would draw level.  At this stage I was reminded of our fortunate win by the narrowest margin over these same Blues back in March of this year.

Yet win convincingly we did in the end, so while of course we must explore those multiple low points, it would be crazy to do so without first harping on the positives, so let's do just that, starting with man of the match Jack Conan.

When we marvel over the depth in Leinster's squad the easiest starting point is the back row.  Pick a matchday 23 for the province and any team in Europe would be more than happy selecting a 6, 7 and 8 from the players you left out.  It gets to a point where you almost forget to focus on the individuals themselves, yet Conan's display on Friday certainly got your attention.

It's not that he's particularly flash.  He's the kind of player who just knuckles down and gets on with it.  But the point is that his definition of “getting on with it” involves a phenomenally reliable standard.  He's not happy carrying the ball into contact - he'll wrestle himself free for any kind of gain he can muster, and on this occasion he mustered quite a lot - 103 metres on just 16 carries suggests the gainline is merely where he gets started.

And if he finds himself in space, he's not going to just barrel forward until he is hauled down as many number 8s would do.  He's not even going to find the first player in support and chuck it to him.  He clearly wants to make the most of each and every opportunity and thus shows an intelligence that is crucial for levels above the Guinness Pro14.  Oh, and he's good at keeping the ball in scrums, too.  Oh, and he's a more than decent lineout jumper as well.  Just all of the above and more besides.

For the guts of the past decade, whenever an Irish number 8 whose surname doesn't rhyme with “sea flip” has an outstanding performance, pundits and fans alike are quick to point out that “Jamie had better watch out”.  He has still seen off all comers in that time, yet now when he returns from his rare injury layoff and gets a chance to show his form, he'll have a tough task prising Conan free from the first team thoughts of Messrs Cullen and Schmidt alike.

But Jack wasn't the only positive for Leinster on the night - I reckon what actually won the match for us was our defence.  During the lean times in the first hour or so it was like the whole occasion was a prolonged defensive drill for the lads - what's that?  We have the ball?  Nah, can't be having that, someone knock it on so we can get back to the task at hand, ie smashing Cardiff players well behind the gainline, and once again with centres Nacewa and O'Loughlin leading the way (Fardy and Bent also high in the tackle count) you felt our guests wouldn't score even with another eighty minutes.

No team can turn a one-try haul after an hour into a bonus point one at full time without impressive work from the bench.  First, after Fardy was once again a pest at the breakdown ending one of several multi-phase Cardiff attacks going nowhere, the ball fell perfectly for Sean Cronin to do his best William Webb-Ellis impression, picking it up and running in from precisely the halfway line.

Then with a penalty advantage coming, Ross Byrne finally executed the kind of kick pass I was demanding in my preview  and though it took a bit of a juggle it turned out to be a brilliant catch from Barry Daly over the line before dotting down.

Suddenly, and unbelievably, the bonus point was in play, and right from the restart we got it with an incredible sequence that began with a charge from Devin Toner on his 200th appearance and when you factor in clearing out and support lines, probably involved all 15 boys in blue at some stage.  Lightning quick passing through the hands got it to Conan who chose to find van der Flier cutting inside him; we'll just accept that the Wesley flanker meant to flick it on to sub scrum half Nick McCarthy who fended off two challenges to get it over.

It was the kind of try you love the most because, coming as it did after the 70th minute, it meant those who incredulously leave the RDS well before the full time whistle will have missed it.

Now to some things that didn't go quite so well - though in Isa's case it could and arguably should have gone much worse.

For his yellow card incident I have to give the bulk of the credit to Alex Cuthbert.  Isa had kicked the ball into the Cardiff 22 and after being retrieved by the Welsh international he brilliantly sidestepped the Leinster skipper who was, shall we say, a tad over-eager in his determination to stop him.  Cuthbert's burst of speed off his left foot plus Nacewa's flailing attempt to tackle = a high shot to his neck and a very nasty-looking challenge regardless of intent, yet the first thing he did was get up and shake Isa's hand.  Even in rugby not soccer circles, many would say he might have stayed down to play it up.

The referee on the night was Andrew Brace and he drew much praise for his performance and I'm not really going to argue with that - my annoyance is more with the fact that in a tournament that spans five nations the officiating crew shouldn't come from any union involved on the night.  Of course they are professional.  Of course they will all do their best not to appear biased.  I just don't think they should be involved in officiating teams from their own corner of the world when it can be avoided, though I will offer the Pro14 some mitigation in that they had a lot of changes to make in a small space of time.

Going back to this incident...if we're to use “common sense”, perhaps the yellow card that Brace went for was the right decision.  But in this supposed “zero tolerance” age where player safety is meant to be paramount, I have to say I was very surprised (not to mention relieved of course) that Isa was able to take any further part.  That's just my opinion, though I'm not sure the Blues would have found crossing our line any easier even if it was red.

Anyway...to finally get to Leinster's own try-scoring problems - they started with that most infuriating element to our play these days...an attacking lineout deep in the opposition 22 where we can't get the ball safely from hooker to jumper.  Cardiff 10 Steve Shingler dropped a simple pass seconds after the kickoff and for the first four minutes we were attacking their line.  A penalty was put to the corner, yet Tracy's dart was a fraction too high for Rhys Ruddock.

It was really frustrating because when we had another similar chance almost half an hour later, we mauled it all the way over the line for Tracy himself to dot down.  Had that early chance been converted, who knows, it may have settled us enough to have more points on the board by halftime than just ten.

Instead we went on to make mistake after mistake, with Ross Byrne often the culprit but there was plenty of it to go around.  Thankfully our opposition was returning the favour more often than not but like I said, as the clock ticked into the final quarter the result itself was in doubt and we will definitely face tougher opposition than this down the line so the mistakes will have to be left behind.

Going back to the positives, one player who I thought did well in that opening half was Rob Kearney, showing a great eagerness to run with the ball.  After Conan, he was our leader in that department despite falling once more to injury moments into the second half - his bad luck is reaching Luke Fitzgerald proportions I fear; hopefully he will be back soon.  His hit on Lee-lo shortly after Isa was in the bin was particularly well-timed - the Cardiff centre had a couple of certain try scorers outside him after his clean break yet our fullback's involvement put him off just enough.

Speaking of borderline decisions, some have suggested that Isa “took a dive” to get us three valuable points before the break.  Perhaps his reaction to Navidi's challenge was closer to what Cuthbert's could have been earlier, but there is no doubt the Cardiff flanker stepped into his line, so the protesters get a stern “jog on” from yours truly.

Among the other good Leinster displays we had Jordan Larmour, who I would keep in a starting role for the next few weeks at least. Luke McGrath did enough to show he's the number one scrum half including an impressive double-tackle shortly before Cronin's try, and there was also Scott Fardy who, despite getting a cheeky “we're in the northern hemisphere now” from the ref at one point in this match, seems to have settled down to the Leinster way extremely well so far.

Like I say, ten points out of ten to start the season cannot be sneezed at and although the new South African teams will be keen to impress their home crowds over the coming weeks, we have to go into this ground breaking tour with much optimism, particularly with players like Jack Conan literally leading the way.  JLP