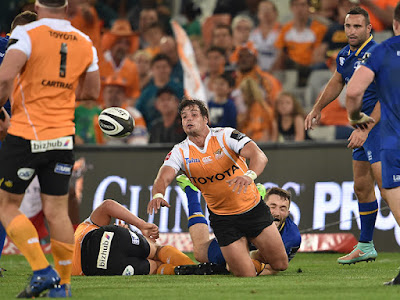 No sports fan enjoys watching their team get beaten any day of the week, especially when it's by a wide margin after nurturing hopes of two consolation bonus points right up to the final pass of the contest.

But one thing I've noticed over the years is that there's something about Friday evening rugby that makes the defeat taste just a tad more bitter.  The derisive tweets at full time just a tad more edgy.  The comparisons to previous disappointments just a tad more pronounced.

It's understandable really...at the end of a long day which comes at the end of a long week, you're trying to get yourself in a positive frame of mind going into the weekend, only for the team you've pledged to follow 'T.I.D.' to go and plunge a massive blue bottle deep into your ointment of fun.

For this loss, however, I wasn't quite as animated as usual.  Maybe that's because I was out of the house this time...generally watching a result like this at home would have the rest of the family - scratch that - the neighbourhood, seeking the company of any bear with a sore head they could find rather than be within growling distance of yours truly.

Yet somehow the pub grub along with the few pints to wash it down in a Rathmines establishment made me a lot less cynical than I normally would have been, though as I scrolled through my twitter feed I could totally appreciate the anger I was seeing from those who perhaps didn't enjoy similar relaxed surroundings as they watched.

Of course this was a disappointing display, and one which got just what it deserved, a disappointing result.  But was it really the worst Leinster display ever?  And does it really mean Leinster's immediate future looks bleak?  Absolutely not.  At full time I conceded that I would have to watch again to see just how bad it really was, yet once I did thanks to YouTube, I still felt the same.

First, we must give credit where it belongs - to the Toyota Cheetahs.  Many is a time we played poorly and gave our opposition chances to win yet they haven't been able to take it.  And let's face it - we were all equating them with the Southern Kings, if not even the two Italian teams in the league in that they 'should' have handed us an easy five points.

But to say this result came about simply because we were off our game, or missing key players for various reasons, or anything else for that matter, shows our hosts much disrespect.  From skipper Henco Venter with his barnstorming runs to Ernst Stapelberg slotting 7 placekicks to Makazole Mapimpi averaging over 15 metres per carry - we can be forgiven for not knowing their names before Friday but certainly not after; the league is much stronger with them in it and of course I could name many more besides.

Still, this is a Leinster fan site, so focus on the boys in blue I must, and I certainly can't stall much longer in this writeup.  In my preview I listed a number of things we needed to work out for us to get to our 'expected' winning margin, and none of them did.

The reason I'm focusing on our centres is because, more so than usual, it's our defence which will be key in this contest.

For me, the biggest weakness I saw in our win the previous week in Port Elizabeth was in our centre pairing of Noel Reid at 12 and Rory O'Loughlin at 13.  Both are fine players in their own right, and both showed what they can do on Friday with almost identical long pinpoint fizzed passes on the run to Barry Daly for the first two tries of his hat-trick.

Yet we also look to our centres to be the fulcrum of the overall defensive structure. Of course the tackles need to be made from 1 to 15, but you only need look at the Cheetahs' opening try from William Small-Smith to see how important it is to have an airtight 12/13 channel.  I had hoped Isa starting at 12 would give us that bit of experience and leadership we needed to keep it so, yet as I watched in the pub I never noticed he was forced to leave the field as early as the 17th minute, and to be fair, the South African commentators missed it too.

Off a scrum well into the Cheetahs' own half, Reid and O'Loughlin have rings run around them by their opposite numbers in the blink of an eye - and like I said earlier, it wouldn't be right to heap all the blame on them...they were simply outfoxed in that moment and if there is any consolation to be had for Leinster, it's the knowledge that not only will those two learn from that mistake and improve, we have plenty of other options for those roles in bigger matches to come.

...as impressive and all as Ross Byrne can be with his boot he'll need to be spot on as will JGP with his box-kicks

Neither were, simple as.

The game was just 32 seconds old when Gibson-Park made his exit clearance from the kickoff go way too deep into the arms of the pacy Cheetahs back three; as expected they ran it back into our half where we shipped the first of a multitude of penalties [more on that later].  I have harped on the Kiwi 9's box-kicking often since his arrival - he falls between the two stools of wanting to put them long and trying to get them to fall in an area where chasers can compete.

When it comes to Ross Byrne, his name appears in my match notes for all the wrong reasons all too often, particularly in the first half an hour.  Missed place-kicks, getting called for penalties, letting a ball bounce into touch which he might have caught, as well as putting a bit too much on his own kicks from hand...after playing a part in putting Daly over with our first bout of possession, he just wasn't able to settle back into a pattern.

As for their replacements, while I don't entirely blame Cathal Marsh for the interception try right at the end [sure, Luther Obi saw the pass coming before his team were even added to the competition, but we were chasing a last-gasp try worth two points and chances had to be taken] I still believe Joey Carbery should have had some time at outhalf, if not starting then at least as cover.

Of our halfbacks on the night it was only Nick McCarthy who emerged with much credit with me, which is ironic given he wasn't meant to travel in the first place.

With one very big exception of lineouts...our pack has done really well for the first three rounds whatever way it has been put together.

Just in case you think I've let the forwards off lightly - of the eleven penalties we shipped throughout, two were pinned on Ross Byrne while the rest were from the pack.  And it's not as though we kept repeating the same no-nos...if you put all the possible infringements down on a bingo card it would be pretty much full by the final whistle.

Actually despite the fact that discipline was our biggest issue, the Cheetahs saw 14 penalties on the night to our 11 - what did for us in the first half was their location as Stapelberg was able to land four kicks to give his side a seven point cushion as well as a ton of self belief; then immediately after the break, when the result was still in doubt and the next score critical, it was our timing as Mick Kearney got nabbed for two in quick succession putting the home side on our line before James Tracy did his chop tackle [or 'grass-cutter' as the South Africans call it] to see yellow.  The home side crashed over from the next lineout and there really was no coming back.

The scrums weren't a disaster but definitely not what they had been in previous weeks while the lineout continued to disappoint at the worst possible moments, assuming there are any good ones of course.

Only Josh van der Flier emerged with an honours grade from the forwards; he was really putting himself about with strong carries here, stronger tackles there, and burrowing jackle-turnovers seemingly everywhere.

If anything frustrated me in those closing stages, it wasn't the intercepted pass by Marsh, rather the quickly-tapped penalty on the 77 minute mark by Joey Carbery.  It turned out that Girvan Dempsey's assurances that we would not struggle for final-quarter fitness were borne out...perhaps it was too little too late for us but the fact still remains that we had a purple patch which included both great intensity throughout the fifteen and the completion of Barry Daly's hat-trick [his little swerve which got him away from a trio of would-be tacklers for the third was awesome] and with just a pinch of composure we could have gotten closer to a fourth.

But look...I've covered all the negatives I could find [or at least wanted to!].  It's imperative that we put this behind us and appreciate that no team will go to the Toyota Stadium with any complacency this season after the way they dispatched both us and Zebre.

A very important series of matches lies ahead - Munster in the Aviva, Montpellier and Glasgow in Europe, then Ulster and Glasgow again in the league.  Rather than wallow in too much doom and gloom from Bloemfontein, we must instead welcome the boys home to the RDS this Friday and see how they fare against Richard Cockerill's Edinburgh.

Here's hoping a return to a familiar hemisphere and time zone will go hand in hand with a return to the standards we've come to expect.  I'm betting that it will.  JLP