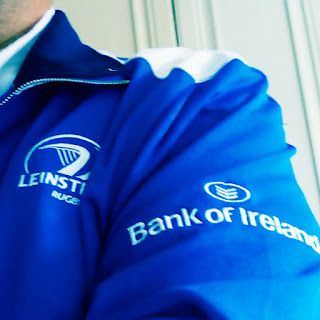 Leinster Rugby couldn't be what it is without sponsorship so it can only be good news that they are now set until 2023 - hopefully when the next deal begins we'll be gearing up for a World Cup on these shores...

The only thing I'll say about this news is that I sincerely hope it doesn't involve putting the sponsors' name on the merchandise any more times than they already do...I think they do a decent job as it is letting us know they're the province's primary backers!  Though their name looks a much better fit than Bank of Scotland that came before...

Anyway, below is the official statement from Leinster Rugby.  JLP
Bank of Ireland and Leinster Rugby have today announced a five year extension of their sponsorship through to the 2023 season. In addition to exclusive branding of all playing and training kits for the Leinster Rugby professional team, the partnership continues to encompass all Leinster rugby activity right through to grassroots community, schools and club level.

Speaking at the announcement in Tullow RFC this morning, Bank of Ireland Sponsorship Manager, Gemma Bell commented, "Bank of Ireland has proudly partnered with Leinster Rugby since 2007. This partnership goes way beyond simply logo badging to encompass all levels of the Leinster organisation with a particular focus on the development of the game at amateur level. We want to continue to support the province as they make great strides in nurturing younger players and widening the talent pool to ensure the sustainability of the game into the future.

"Leinster rugby has a long tradition and presence in local communities across the 12 counties with a very devoted fan base which is what makes the partnership such an excellent fit for Bank of Ireland. With 71,000 participants across 72 clubs and 560 schools, the association provides us with opportunities to strengthen local ties and develop new connections. This builds on the Bank's broader programme of activity to support and drive the local economy at events such as Enterprise Town, our Youth programme for schools and our robust innovation programme for startups.

"We take pride in being associated with some of the most historic and celebrated domestic competitions in Leinster and look forward to supporting the continued success of Leinster rugby in the seasons ahead.”

Kevin Quinn, Head of Commercial at Leinster Rugby said, "the Bank of Ireland brand is synonymous with Leinster Rugby and the senior team that run out at the RDS, but over the last few seasons in particular Bank of Ireland has invested considerable resources in the domestic game and the game of rugby at grass roots level.

"Their support of the Leinster Women's Team and age grade teams, of the Leinster Schools Senior and Junior Cup, in addition to the Provincial Towns Cup have elevated those teams and competitions to a new level and the clubs and schools in all 12 counties see that impact across the season.

"The confirmation this morning of an extension to 2023 of the excellent partnership between Leinster Rugby and Bank of Ireland, is a further boost to the domestic game and we look forward to continuing our work with James, Gemma, Sharon and all the Bank of Ireland team as we strive to improve and grow on and off the pitch.”
at September 20, 2017