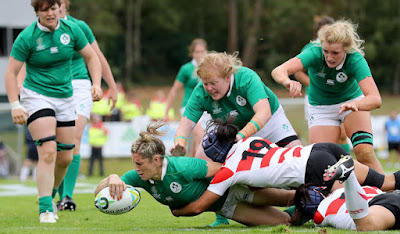 The turnover time between matches is so relatively short that as Irish fans we were barely finished trotting out that well worn and never-ending phrase before we had to crank it up again.

And it’s at that short length of time where I’d like to begin this writeup.  Once more this was a disappointing display from the Irish girls but since once more they were able to knuckle down and finish on top to stay in the competition, once more I can’t see the glass as being anything but half full.

Of course in an ideal world we’d love for Ireland to have not only world class players at every position, but more to back them up.  But we’re not drawing on the same player pool nor are we professionals like England, and we don’t have teeny tiny rugby balls for blood cells like they do in New Zealand.  We have to do everything we can to make the most out of everything we can and the net results have been amazing for the Irish programme over the years.

With just four days between matches in a pool that was never going to be easy even with home advantage, Tom Tierney & co have had to make some tough decisions.  Of course we’d love to see them play our best matchday 23 each time but that’s not doable.  Sacrifices have to be made.  Priorities need to be sorted out.

This is why we only saw Sophie Spence come on as a sub against Australia.  It’s why we didn’t see the likes of Jenny Murphy or Maz Reilly aginst Japan.  All due respect to the replacements in every case, but you’d have a hard time convincing me a full strength Ireland team without a tougher opponent in four days would have found things so difficult.

Now of course we can’t simply put the fact that we were 0-14 down at the break entirely down to ourselves.  Despite getting well played off the park by France on matchday one, this Japanese side were billed as one that were strong on set pieces and they certainly lived up to that, with their scrum in particular playing a big part in both tries.

But it wasn’t merely personnel that was holding Ireland back.  After struggling to get a decent passing game together against the Wallaroos, it looked as though we wanted to use this match as an opportunity to right all the wrongs yet once again it wasn’t happening for us - the more passes went through the hands, the less likely we were to get near the gainline.

So there we were at halftime, with the only thing more surprising than the fourteen points on Japan’s side of the scoreboard was the big duck egg on ours.  And when Katie Fitzhenry saw yellow early in the second half for a high tackle [wasn't a binnable offence in itself to be fair to her but we had been pinged a few times in the first half for them already] we really looked to be sunk.

Yet even with 14 on the park the girls were able to knuckle down and make the right changes to their game.  The passing was abandoned in favour of that which we had shown we could do very well - booting the ball for territory, applying pressure to win the ball back further up the field, and finally rolling through the pick and go phases until the defence cracked.

And fittingly it was Alison Miller, who missed a key tackle in the run up to the second Japanese try, who was able to dot down to start the comeback.

Most crucial to our finding twenty-four unanswered second half points was the contribution from our bench.  First we had Ailis Egan to fix the woes in the scrum, then she was joined in the front row by Leah Lyons who played a huge part in the success of our phase play.

At one point it looked as though we were to find ourselves stuck on an infinite loop as a succession of defensive stands, followed by impressive penalty won by jackling, followed by lost lineout putting us back under the kosh seemed to make that crucial second try beyond our grasp.

Yet make our way up the field we did and once a lineout actually stuck [an area where Reilly was badly missed for sure] we were able to put together a perfect maul which ended up with yet another supersub Paula Fitzpatrick getting the ball over the line.  I still have a touch of the tickle in my throat from screaming “”COME ON!!!” as the maul trundled towards the line.

From there it seemed more a question of when we would take the lead not if.  Now it was Japan’s turn to find it tough to get out of their own half and once we got on the phase train there was no legal way of stopping us.  It was as though we kept trying to beat the last visit for amount of total phases - if one had over ten, the next had over twenty and right at the end, I kid you not, the counter passed the thirty mark.

To be fair to the backs they played their part in these longs spells of possession, with the crash ball option used to great effect on more than one occasion by the likes of Sene Naoupu and Jeamie Deacon.  Again it was magnificent ball retention by the entire squad when it mattered most.

On that series with over twenty I can’t for the life of me fathom why Japan’s blindside wasn’t binned for playing the ball on the floor as it was the only way they could stop us.  But fair play to Nora Stapleton for keeping a cool head and slotting the penalty which nudged us in front, and the icing on the cake was provided by FItzhenry’s second at the end.

So two wins out of two for the host nation; sure, maybe we went ‘the scenic route’ but the match with France is to all intents and purposes a quarterfinal and while I wouldn’t dare presume to know Tierney’s plans I’d have to assume he’ll go for his best available selections from here on in whatever the turnaround.

Whatever they plan to do, one thing they definitely need is the full support of the Irish public, or at very least the Irish rugby fans.  Unfortunately, according to an article in the Irish Times from Una Mullally today, it seems like even that is hard to guarantee, and I have certainly experienced some of the incomprehensible attitudes of which she writes.

Seriously, what’s not to understand.  I've said it before but I’ll say it again.  It’s Ireland.  Playing test rugby.  In a World Cup.  At home.  Particularly if you're a rugby fan or even just a general sports one, what more do you need to get on board???

Well, all I know is that those who choose not to are seriously missing out.  Here’s to the rest of us watching the girls #BringIt against France on Thursday.  JLP
at August 14, 2017