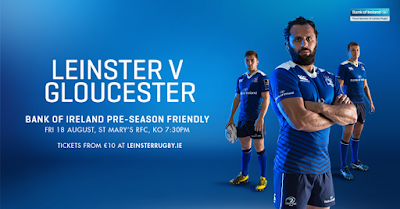 What was originally called the Celtic League might have had more reincarnations than Doctor Who but from the point of view of the Leinster coaching ticket, there is a block of competitive matches to prepare for so apart from longer plane journeys, nothing really has changed.

After my early preseason 'on paper' look at the Leinster squad plus a trip to Perpignan, tonight we actually get to see them in action live, and as an added bonus for yours truly, they're actually playing at the closest available AIL ground to home, namely St Mary's RFC on Templeville Road.  Literally within walking distance.

The starting lineup includes names Leinster fans will be very happy to see back in action after a lot of injury problems like the Kearndashians and Jordi Murphy.  It also includes the name Scott Fardy, and considering the other new import James Lowe is still on the other side of the world with the Tasman Makos getting their asses handed to them by Canterbury, it's a good time to show us at least one fresh face.

But the selection that raised a lot of eyebrows is that of Isa Nacewa at inside centre.  He has played at out half and across the back three but with the possible exception of a enforced patchwork back line in a final quarter or two, we haven't seen him there yet to my knowledge [though I'm sure someone will be quick to prove me wrong if so!].

With both Robbie Henshaw and Garry Ringrose unavailable through injury [as if they'd be involved at this time of year anyway] we need to settle on a centre combination to get us through to October and with Tom Daly picking up a long term injury last week, it seems we're thinking outside the box a tad with our skipper.

Many online have wondered why Fergus McFadden hasn't been used to plug the gap but I'm wondering if his own Ireland ambitions aren't being taken into consideration as well.  He might not be in Joe's first choice plans but he is definitely someone he likes to turn to after an injury or two.  So with Noel Reid pretty much our only remaining natural 12 option, I guess it makes sense to give Isa some time there in case he's needed.  I'm assuming he'll be used more as a 'second five-eighth'.

Then we have young Jimmy O'Brien outside him.  Around this time last year we were planning to visit Navan RFC with many wondering who Tom Daly and Rory O'Loughlin were and how they'd get on in full Leinster blue.  Well both, though more so the latter, did very well when given the chance so if O'Brien can make similar progress it will be a handy string to our bow.

Among the other youngsters getting a look from the start tonight are Hugo Keenan, who impressed on the Wolfpuppies' march to the World final last year, and Max Deegan, the latest talented back row to come off the Leinster assembly line.

There are of course several more prospects ready to come off the bench, as normal we have named a slew of replacements, none of which are likely to be wearing numbers [I have to say I like the Gloucester approach for these matches, naming separate starting XVs for each half; much more fan-friendly] and among them keep an eye out for Jordan Larmour in particular he seems to be a promising back three for us down the line.

But most of all this match is a massive occasion for St Mary's RFC, a proud club on the Irish scene - this taken from their webpage...

Established in 1900, St. Marys Rugby Club is a club steeped in tradition and has, over the years made a significant contribution to the sport of rugby in Ireland and beyond.

We are an open and welcoming club based in Templeogue, Dublin 6 and boasting top class facilities for our members and guests.

St. Marys RFC has over 20 teams in the club from a Senior 15 playing in the All Ireland League as well as two womens teams, 8 junior teams, Youth rugby and down to U.7s mini rugby.

I wish them all the best for a good turnout enjoyed by all tonight.  What's that?  You want me to make a prediction?  Oh alright.  Premiership clubs tend to be a greater state of readiness at this time of year and their 'first half' XV could easily start in the Premiership so I'm going to say they'll win by 6.  How's that?  Hope to see you there.  JLP