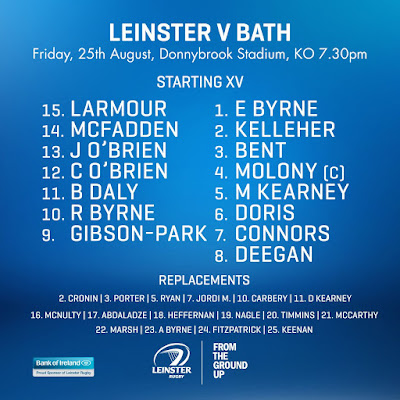 Last Monday we celebrated our 9th anniversary of harpin' on Leinster & Ireland rugby which means this year's annual preseason pilgrimage to Donnybrook represents the tenth we have covered.

The first was back in 2008 and the visitors were the Queensland Reds.  Leinster wore green jerseys on the night to honour some eco-friendly sponsors and we were preparing for our campaign in what was then called the Magners League, though I called it the Meaningless League as I didn't feel the competing teams were getting much benefit.

Since then I have to say Celtic Rugby has done much to change with the times - not all of it has worked perfectly but now we have a fourteen-team competition with a couple of new additions from the southern hemisphere and I for one am looking forward to seeing how it works.

First, however, we must get through tonight's visit of Bath, who are themselves preparing for their opening Premiership tussle of the season a week from Sunday where ironically they travel to Matt O'Connor's Leicester Tigers.

They gave us a bit of a thrashing this time last year and looking at the lineups this time around, we could be in for something similar.  Leo Cullen has leaned on the academy a lot more this week than he did in Templeogue against Gloucester.

Most notable is the presence of two young O'Briens in the centre, Conor and Jimmy.  As if it wasn't enough that our squad is laden down with Byrnes and McGraths, now we've a few more O'Brien's to sort out, with a Tommy waiting in the wings as well!  Given we're relatively light at 12 and 13 right now we could do with some talent on the conveyor belt and these two will definitely be tested by the Premiership outfit tonight.

In the pack, I wasn't exactly thrilled to learn that Peter Dooley will be out for a few weeks.  This makes tonight's start by Ed Byrne a crucial one, and I wonder if Michael Bent is being considered for a switch back to loose head as cover, although top prospect Andrew Porter has some Leinster caps under his belt.

Tonight could well be an unusual experience for Max Deegan as he is the most senior member of our back row!  They also have a challenge ahead against the likes of Bath skipper Matt Garvey and Lion Toby Faletau.

Pulling the strings at 10 once more is Ross Byrne; he'll need his kick pass radar to be finely tuned to get by what I expect to be a determined visiting defence, though with Joey Carbery listed as wearing 10 he could well be gearing up to kick off our campaign next week.

Also on the bench are Sean Cronin, Jordi Murphy and Dave Kearney - as always there will be much chopping and changing throughout and hopefully they all get as much game time as possible with of course no more injuries.

When it comes to predictions, I'm thinking something similar to last season's result though I'm going to say closer, around ten points to the more experienced lineup.  The hope is that among these new names we have a similar stash of talent ready for the highest level much like those Leo & co uncovered last season.

Most of all here's to yet another quality occasion at "old HQ".  Hope you can make it but if not, keep in touch with Harpin On Rugby's usual social media channels around kickoff; we're planning to do a live blog of the action.  JLP