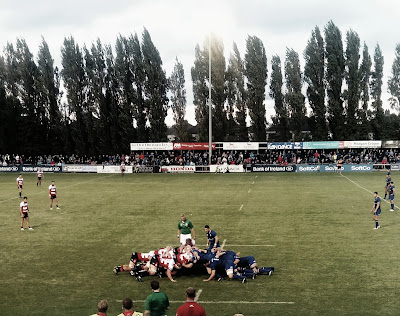 I could definitely get used to being able to walk from my front door to arrive at Leinster's home venue within half an hour, but alas this occasion was a once off, though it did make me determined to watch more AIL rugby next season, starting on September 16 when Garryowen come to Templeville Road to face St Mary's.

And once again this practice of playing one of Leinster's preseason fixtures in a club ground was a success, as Friday's crowd seemed every bit as large and enthusiastic as that which went to Navan RFC around this time last year.

Unfortunately my plans to have space to set up my laptop and do a 'liveblog' of the action were dashed by a private function flooding the area we were meant to use so I left the few available spots to the 'real meeja' and found space against the railing on the balcony outside.

But I'm certainly not complaining!  It's an honour to get to cover Leinster any way I can and by the wonders of modern technology I was able to tweet updates from my phone and given the rain stayed away for the duration of the match it was an excellent vantage point.

In my preview I highlighted some interesting aspects of Leinster's starting lineup, like the return of the Kearney brothers, Isa playing inside centre and our first look at new boy Scott Fardy.  All of them were quick to get involved as it turned out so let's follow my tweets through the eighty minutes shall we...

1 minute in and Scott Fardy off to a great start line break leads to try in the corner for Isa suspect forward pass in the buildup but hey
— Harpin' On Rugby 🏉 (@HarpinOnRugby) August 18, 2017


The levels of preparedness for the two teams were the exact opposite of what I expected...in the past Premiership clubs have always seemed a lot more match ready at this time of year but It was Leinster who came out all guns blazing.

Pretty much the first set of phases saw us set up an inside ball in the hope that the Wallaby flanker-turned-lock would find a way through and as it turned out the bus which brought Gloucester to this leafy Dublin suburb could have driven through the gap.

Nice try for Leinster Bryan Byrne touching down after being put in by Rob Kearney. Isa with good crash ball to start it off. L 12-0 G 14m
— Harpin' On Rugby 🏉 (@HarpinOnRugby) August 18, 2017


I had assumed the Leinster skipper would be used more as a 'second five eighth' type of inside centre but on the contrary he wasn't averse to putting his head down and once again there were soft shoulders for him to exploit.  Some good support from Bryan Byrne was rewarded with his name on the scoresheet.

Bit of sustained possession for Glaws leads to a try for Henry Purdy 12-7 to Leinster after 26m #COYBIB
— Harpin' On Rugby 🏉 (@HarpinOnRugby) August 18, 2017


The only try I didn't get to actually see but it did come after the visitors' only 'purple patch' on the night.  They weren't really at the races the rest of the time from what I could see.

The Glaws fullback Halaifonua is a tank Leinster are bouncing off him trying to stop his runs from deep. Isa having his shoulder looked at
— Harpin' On Rugby 🏉 (@HarpinOnRugby) August 18, 2017


Just to be clear - I'm not saying he was particularly effective, but let's just say that whenever you're contemplating putting up a high ball and chasing, you need to bear in mind that you'll have to tackle this guy shortly afterwards and first Rob Kearney, then Hugo Keenan and finally Isa felt the full impact and it took the Leinster skipper a while to get up - I was worried for a minute or so there.

Try Leinster Max Deegan crashes over after some good running up the touchline from Dave Kearney. Ross Byrne adds 2 and it's 19-7 after 35m
— Harpin' On Rugby 🏉 (@HarpinOnRugby) August 18, 2017


Everything seemed to be happening for Leinster down that left wing.  Some nice passing in the wide channel saw Dave K belting up the touchline and eventually it was the promising number 8 Deegan touching down.

Isa's shoulder seems fine he just creamed a scrambling Gloucester defender. Pen to Leinster under the posts they take a scrum
— Harpin' On Rugby 🏉 (@HarpinOnRugby) August 18, 2017


Nothing came of the scrum in the end but it was a relief to see Isa able to get involved he had a decent shift for someone more accustomed to a back three role.

I'm standing beside the guy holding the remote control for the scoreboard he has a pint in the other hand but no mistakes so far #respect
— Harpin' On Rugby 🏉 (@HarpinOnRugby) August 18, 2017

I couldn't leave my spot during the break because I had no hope of getting it back so as well as watching the halftime minis do their thing I chose to tweet about my immediate surroundings.  I didn't have room to point out that this guy seemed to be something of a character at the club and was sporting a jacket that reminded me of Colin Baker's Doctor Who!

Rake of halftime changes for Leinster including Ferg at inside centre and Larmour at fullback #COYBIB
— Harpin' On Rugby 🏉 (@HarpinOnRugby) August 18, 2017

We're all used to a bit of confusion after halftime in these matches with a raft of wholesale changes on either side.  It was interesting to see McFadden playing at 12 and I should add here that Jimmy O'Brien, who was due to start at 13, was a late withdrawal due to illness and he was replaced by Adam Byrne who played over a half there and did reasonably well.  I have certainly had a lot of my early preseason questions about our centre options answered in the last week or two.

In most facets of the game where Leinster were dominant, it was hard to tell if it was that we were really good or was our opposition really poor.  Given Gloucester had the likes of John Afoa in their starting pack, however, our starting front row of Dooley, Bryan Byrne and Michael Bent really did a number on them, with several strong shoves and penalties won.  The lineout wasn't quite 100% but not to the point where we'd worry...yet 😉

Seemed a bit strange going for any three points in a friendly, yet when you think about it, if it were a full match situation. going for the posts to create a 15-point margin is exactly what you should do.  It's also worth noting that between them the Leinster kickers Ross Byrne and Cathal Marsh were 7 for 8 on the night.  Also, Ross is still fond of the kick pass so expect to see it feature in Leinster's plans over the opening weeks of the new campaign.

This kid Jordan Larmour is headline gold and yes, I'm sure you can come up with much better ones than those above, feel free to share if so!  And if he lives up to the promise he has shown for Ireland Under 20s on top of his cameo in this match, he has many good headlines in his future.

What we saw for his first try was a glimpse of this positivity...he could easily have passed it on outside him for the score but he backed himself, had a bit to do, and did it.

Definitely a good night for Leinster prospects as Deegan snagged his second.  Glaws looked like they started thinking about the journey home around the sixty minute stage and Marsh's pass could have gone to a few wide open Leinster players.

Try Leinster. Larmour with his second after he controlled a chip through with his foot and it sat up perfectly at the line for him. 43-7 69m
— Harpin' On Rugby 🏉 (@HarpinOnRugby) August 18, 2017

Pick of the Leinster bunch of tries for me and why I have Larmour as my man of the match.  One thing I hope he doesn't need to learn...if there's ever any question about whether or not you intended something that looked like it might be skillful, always, always, ALWAYS say you did.  A chip over the blitzing Gloucester defence from Marsh fell a little ahead of the full back and channelling his inner Messi he kicked it forward to see it roll perfectly in his own path for him to take just before the line.  Bravo.

Not much more I can add  other than perhaps it was our own defence switching off this time.

Can't grumble too much about a fifty-burger even in preseason and even though it took a SNAFU in the Gloucester midfield to provide it, we were still happy to take it.

After the match was over I had a few pints in the Centurion Bar which went down very well though I was still well able to find my way home on foot afterwards, stopping of course for a bag o' chips on the way.

Next week it's back to more conventional methods of travel to Leinster matches as we host Bath at "old HQ" on Friday.  Much to look forward to with the new Pro14 kicking off the week after, but I hope they do something similar to this Gloucester fixture next season, even if it takes a little longer for me to get there.  JLP