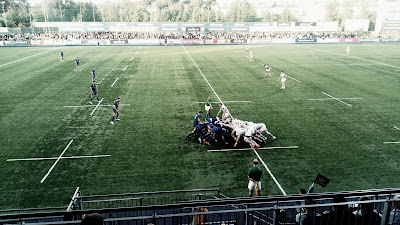 STOCKED TO THE MAX

About nine years ago we posted our first-ever match writeup of Leinster's preseason clash with the Queensland Reds at Donnybrook.  Since then we have also seen the Melbourne Rebels and who can forget the visit of Championship side Moseley in 2015?  What's that?  All of you?  Fair enough.

My point is that along with Ulster, they have been exceptions to our general rule at this time of year, namely that we face teams from the Premiership, and what that tends to lay bare is just how differently the preseason is viewed on different sides of the Irish Sea, particularly in a Lions year.

Nobody who knows anything about Leinster & Ireland rugby even bothered scanning the pre-match lineups for names like Johnny Sexton, Sean O'Brien or Tadhg Furlong.

We know how the player protection system works, and the contrast was clear to see as there was to be no such rest on Friday for the likes of Toby Faletau, even if he was one of the stars of Warren's Wanderers' drawn series with the World Champions.

And while it wasn't only his name that was recognisable on the visitor's teamsheet, its presence alongside those of Guy Mercer and skipper Matt Garvey showed buckets of experience in their back row, as opposed to the not so tried and tested combo that Leo Cullen was going with - Caelan Doris, Will Connors & Max Deegan are names not all Leinster fans would know.

Yet with all the talent we have unleashed on senior rugby particularly in the Cullen era, I was hardly surprised to see a first half where not only did the two back rows pretty much cancel each other out in what was mostly a midfield tussle, when a try finally did come it was from the number 8 that DIDN'T just go toe to toe with Kieran Read a few short months ago.

You can be sure Toby wasn't out there to be wrapped in cotton wool...he was carrying right from the off and Garvey as well was being used as their crash ball option.  But even when the play was over the far side of the pitch and I needed my trusty binoculars all I could see at every breakdown were blue jerseys adorned with 6, 7 or 8 heavily involved in all that was positive for Leinster.  Despite the lack of scoring in that period, it was certainly a joy to watch.

And don't think my praise is going to be all for the Leinster forwards...you don't keep out a well-drilled Premiership outfit for that long without a solid base of tackling cover from your centres, and here we also had names off the conveyor belt - Conor and Jimmy O'Brien, the former of which was actually the first to fell Faletau.

If I had to find fault with this young Leinster selection in that opening spell, it would be with our lineout.  Those situations where we'd win a penalty in midfield then kick to corner were the most frustrating for me to watch throughout the last campaign as all too often we'd fail to get our called set piece going.

After a couple of Ronán Kelleher's earlier darts were a tad high, on this occasion we seemed to be setting up a maul but the ball was dropped and luckily it went backwards; when we got it moving it was Conor O'Brien providing some crash ball before eventually it was Max Deegan getting it down.

Yet another Leinster player holding his own against more experienced counterparts was Ross Byrne at 10.  He has precisely zero full test caps (so far); opposite him was Freddie Burns who has 10, and courtesy of a blood substitution there was also a certain Rhys Priestland, who has 48.  Ross has shown a decent skill set over the past couple of weeks, though it has to be said he was eclipsed in the second half with the arrival of Joey Carbery.

Johnny Sexton is of course the alpha 10 at Leinster and there is no threat to that status for the time being but the contrast between his style and Carbery's can definitely be used to our advantage.  Sexton's game is more methodical and when he gets the precision he demands from those around him, there is space to work with pretty much every time.

In Joey we seem to have something similar to the classic French out half - he likes dropping deep behind the gainline holding the ball in both hands.  The opposition are left guessing as to whether he'll pass, step, kick or crash ahead, and you're left wondering if even he's sure up to the last possible moment.

He wasn't long on the pitch when he beat a blitzing defence with a perfect little grubber through...the dead ball line at Donnybrook is short yet it still fell into the path of Dave Kearney, another 'household name' introduced at the interval, who was able to dot down.  Maybe if a TMO had been available it'd be worth a look as there was a Bath hand involved in the touchdown too but hey, we'll take it!

The visitors weren't for chucking in the towel however and when Kearney scrambled to receive the ball in his own 22, his kick was poor and went straight to Bath centre Ben Tapuai who I have to say ran in a bit too easily from deep.  Overall our defence seemed ok but at this level you snooze, you definitely lose and we were caught out on this occasion.

We started to see a bit of life out of the Premiership side at this point and they brought the scores even closer after a maul to the line was finished off by Kahn Fotuali'i - suddenly it was 15-12 to Leinster and as they say in the USA, we "had ourselves a ball game".

But Carbery was able to get some more possession and at one stage when he had a go at the Sexton-esque 'wraparound' move although the timing was off and he let go of the ball while retrieving it, he managed to improvise another telling kick through the Bath D before it hit the ground and it resulted in a 5m lineout to Leinster.

After a couple of chances and a host of tough Bath tackling on the goal-line, it was sub scrum half Nick McCarthy, yet another to impress on the night, who got the five-pointer and while Fotuali'i pinched a second for himself before the end, the result was really never in doubt.

Others to catch the eye were Ed Byrne in the front row who had a lot of carries in the first half, and young sub tight head Vakh Abdaladze (you won't believe me but I just spelled his name right despite not having seen it since Friday evening) scrummaged very well in the second.  It was also nice to see Sean Cronin back in action, he certainly didn't shy away from the ball and got a lot of hard yards for his trouble.

So overall a satisfying evening in D4 - hopefully Dave Kearney's early withdrawal didn't mean anything bad so we'll have as full a squad to choose from for the big Pro14 kickoff next weekend.

Could it possibly be more fitting that as the tragic news comes through of the passing of another legendary Irish number 8 in Willie Duggan, I'm typing out a writeup where I had already awarded man of the match to Max Deegan.  He is but one of many promising players in the Leinster ranks and here's hoping they all get the chance to flourish in the season to come.  JLP
at August 28, 2017