Should there have been extra time to decide the Lions test series? 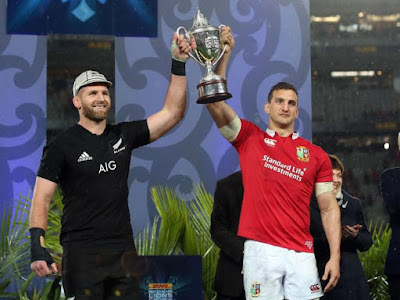 We'll be posting our match writeup on Monday as usual (in fact it will be the final one for the prolonged 2016/17 season) but I'd like to deal with this topic separately as I have seen it raised in several different places around the ruggersphere since the hushed silence around Eden Park at the fulltime whistle.

IMHO the answer to the question in the title is..."in an ideal world maybe, but in a practical one, are you mad?"

Think about it - to bring extra time into a three match series, you would have to do one of two things...

1) Have extra time only at the end of the series if it's level.

For a three-match series to finish level, obviously at least one of the matches will have to end in a draw.  In this particular case, that match was the third test, but what if the draw came in one of the others?

Now you're talking about extra time at the end of a third test in which one of the teams has actually won.  Throw in a sending off like that of Sonny Bill Williams in the third test it gives an unfair advantage to the Lions for the extra time period.

Sure,  extra time would have seemed like a good way to sort out what happened TODAY, but we're talking about setting up a system that prepares for every eventuality.  For me, extra time at the end of test 3 simply isn't a workable option.

2) Have extra time at the end of any drawn match in the series.

If you can guarantee a winner for every match, you won't have the inconvenience of a drawn series at the end.

However, do we really want to leave the possibility out there of the players going through up to an hour of extra rugby?  Especially for the Lions who have been literally flown halfway around the world after a punishing European season as it is?

They're talking about cutting the amount of rugby on future tours, not adding to it.  And I can't see the four national coaches being too happy about the prospect.

So again, it's unworkable.

Now I know extra time isn't the only way of deciding the outcome.  Aggregate scores and try countback would be good ways of doing this, but for me, they take away from what a test series is meant to be....three separate matches in their own right, each won, lost or drawn on the day.

I'm sure there are several other ways of doing this, and feel free to get involved and leave a comment or reply if you can think of one, but as far as I'm concerned, having discounted all of the above, we are left with just two options...

1) Use the Ryder Cup method (In fact I'm pretty sure rugby's Bledisloe Cup does the same) - in the event of a drawn series, the holder of the cup retains it.  Not one Lions fans would like the way today turned out, but had we known this before kickoff it would have put a different complexion on the final stages and maybe the tourists would have opted for touch instead of having Farrell kick that last penalty.

So there's that, or the final option which is the one I think is best...

OK that's my few cents' worth.  Very much looking forward to harping on the actual 80 minutes of rugby itself after a second look.  JLP
at July 08, 2017