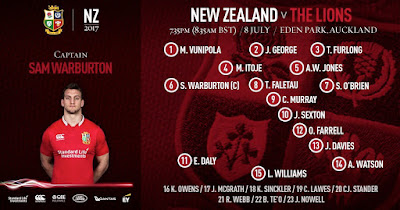 Back in my first preview for this tour over a month ago I made it clear I wasn't as "hyped" about the Lions concept as I had been on previous occasions.

Sure, when Warren's Wanderers are actually playing I've been happy to watch, and often I have enjoyed the matches in question, most of all last weekend's extraordinary contest.  I've just tended to ignore all the Sky Sports-fuelled nostalgia overload in between, and my focus with the squad has been unashamedly on the Irish players.

With that last point in mind, you probably think I'm going to make this preview all about the decision to keep Mako Vunipola in the 1 jumper for Saturday, at the expense of Leinster & Ireland's Jack McGrath.

Actually, I think it's a sound decision by the Lions coaching brains trust.  What can I say, I'm an enigma ;-)

Seriously though, keeping the same matchday 23 after a victory sends a strong message to an opposition you just conquered, assuming of course that the rugby gods allow you to be injury free.  This counts double when you consider this is a squad cut and pasted together from different nations so any continuity you can find will be a benefit.

Obviously I don't think they should go into the match with exactly the same playbook but I'm assuming the likes of Sexton and Farrell are more than capable of mixing things up when required.

But even without the whole "no changes" policy, I actually think Mako was a bit hard done by in the press after Wellington.  Sure, his penalties and subsequent binning weren't much of a help, but the All Blacks were getting away with offences similar to his so perhaps it makes more sense to remember the form from the early matches of the tour that earned him the shirt in the first place.

What is needed more that anything else from these Lions is an ability to withstand whatever the All Blacks plan to throw at them.  And it will be an angry home side they will be up against, nobody likes losing on home soil but this lot takes that to the next level.

I still don't see the point of harping on individual Kiwis before big matches, but the Laumape inclusion is hard to ignore.  He was a cannonball down the 12 channel for the Hurricanes against the Lions and with his depleted side changing their tactics last weekend, he didn't get much chance to test Owen Farrell's tackling.  This time will probably be very different,

Overall it's as formidable a matchday 23 as Steve Hansen has ever been able to field...it's going to take another bout of playing aggressive-yet-smart rugby for the full 80 minutes to have a hope of achieving what would of course be an historic victory.

The bookies have the All Blacks winning by 11... my forecast policy, like the tourists, remains unchanged.  Yes, we can win, but no, I don't think we will.  In fact, even my actual prediction is the same as last week's; I think we'll give a good show of ourselves once more yet assuming 15 a side for the duration, I reckon we're in for a home win by 7-9.

Here's to the boys proving me wrong, in a good way!  JLP