More thoughts on the Pro12+ revamp 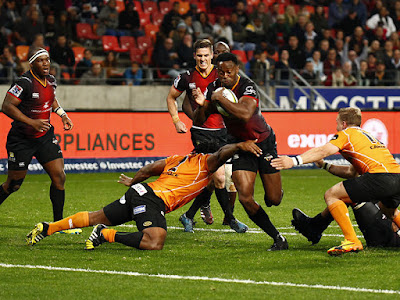 Last week I offered 200 words for a post on Scottish Rugby Blog about the proposed changes to the Pro12.  Now the changes have gone from “proposed” to “imminent”, it’s time to offer some more - here are a few headings to ponder...

Like it or not, this has to be seen as a good move for the Celtic Rugby nations simply because it guarantees extra revenue, and the fact that it appears to be a six-year deal with the South African franchises the Cheetahs and Kings means it’s a lot more than just a short-term fix.

Why so soon?  Why not wait a year to get it right?  Well I must refer you to the “money” heading as outlined above.  If the “alickadoos” seem to think they can get this expansion and all the unique logistical challenges that come with it done in a matter of weeks, then I say let them try.  It does leave them exposed to criticism as it offers an easy explanation should anything go wrong, but I guess we need to hope it never comes to that.

I don’t see why this needs to be a problem.  I have paid for my 2017/18 season ticket, and for that I expected 11 'domestic' and 3 European matches at the RDS/Aviva.  From what I have heard about the new format, I don’t see things being any different, though I would be annoyed if I was deprived the chance to see any of the three other Irish provinces at some stage.

Overall I support this plan, but that doesn’t mean I’m going to agree with every aspect.  For example, I hope against hope they don’t call the new competition the Pro14.  I wasn’t wild about Pro12 in the first place.  Expansion was always on the cards...in fact, there was even talk about the Italian clubs pulling out at one stage.  So when the number of clubs is so variable and can literally change over the course of one off-season, why commit yourself in the name of the competition?  Especially as there is the strong possibility of US franchises hopping on board in the very near future? If something like ‘Pro Rugby’ is available for trademarking, I say go for it now.

UPDATE : Thanks to Edinburgh Rugby fan account @TheBlack_n_Red for this observation re : new branding.

Here’s where I have a major problem.  I really don’t see any need to break up the fourteen clubs into two ‘conferences’, though in real terms they seem more like ‘pools’.

The distinction is that the word ‘conference’ generally implies some kind of common theme among those involved, normally geographical.  In the USA, NBA basketball and NHL hockey have east and west conferences.  In American football, they have slightly different origins in that the NFL was formed by a union of two different leagues which became the conferences.  In Super Rugby, the conferences were designed to ensure at least one playoff game in Aus, NZ & SA.

We have been harping on the use of a conference system on this site for many years now, but only along geographical lines.  Personally if I were to go that route with these 14 clubs I’d split them into three, one Irish with 4, one Welsh with 4 and one ‘International’ with 6.  There would be one drawback in that it would reduce the likelihood of all four provinces making the playoffs or qualifying for Europe, though I still think that's a sacrifice worth making for the sake of the competition.

But the way this is new format being proposed, with each of the five nations’ clubs being split between two conferences, makes little sense to me (though I’d be open to having it properly explained).  Why not keep the one “ladder”???  Does that option mean everyone HAS to play everyone else home and away?  Just keep the schedule at 22 matches for everyone.  Even if a team has an unfair advantage in their schedule, they’ll get found out in the playoffs.

I haven't seen anything about this but I'm going to assume that the South African teams won't have anything to do with qualification for the Rugby Champions Cup. I'd be concerned if they did, not because of their geographical location, rather because it would literally double the amount of logistical problems. We'll see.

We'd hope the recent success of teams like Glasgow and Scarlets would help raise the profile of the league among our oft-sceptical Celtic cousins even without the changes, but there's a flip side to that argument...how will we all feel about this new format next May if either the Cheetahs or the Kings win the grand final? Or worse still, both of them are in it? Again, let's just hope that doesn't happen!!!

One thing to help appease any reservations we may have would be the announcement of new big money signings throughout the league over the coming season. Whatever about the financial advantages, a lot of work will have to be done on the PR front over the coming months to help sell the changes, and with five different countries' worth of fans to appease, that will take some doing.

I can see myself posting again once I see the calendar and the branding have been formally announced, but for now my glass is definitely half full. On the ever-slanted playing field of European provincial/club rugby these days, we literally can't afford to be anything less. JLP
at July 19, 2017