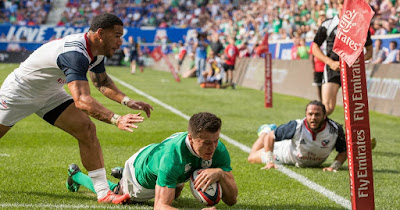 The Red Bull Arena, which is officially home to one New York's Major League Soccer franchises but is actually in Harrison, New Jersey, was specifically designed for the round ball game  Hopefully when the next phase of “purpose-built” stadia for MLS are being planned, someone tells the architect to keep test rugby in mind - the dead ball areas were way too short.  Let’s just say a Chris Ashton-style  “swan dive” attempt would probably result in a 22-drop out instead of five points!

And while I’m having a grumble about the overall US presentation, I noticed eir Sport were getting lot of social media flak for the coverage of this match; I reckon they were pretty much at the mercy of the American broadcaster...the satellite feed was never solid, the camera work was poor keeping up with the play and their graphic package looked like it was programmed in the 1990s (I almost expected a flashing “R” in the corner of the screen on replays!).

But that’s enough about our hosts - I’m sure the occasion itself was good for all those actually at the ground and in actual fact despite the blips outlined above and one sided nature of the scoreline, I thoroughly enjoyed the 80 minutes of action and it offered plenty for me to harp on.

One thing I have noticed while watching the Irish Under 20s (or “Wolfpuppies” as I call them though it seems the popularity of the name is waning) is that their World Championship campaign seems to be more about getting used to the “Schmidt Ireland” way of playing rugby rather than actually competing in the tournament itself.   For example when they get possession in the opposition 22 they have a tendency to roll through the phases whether they are working for them or not, and with three defeats out of three, they are generally not.

That might seem like I mean it totally as a negative but that’s not the case.  There is definitely a “big picture” at work in Irish rugby, namely assembling a squad ready to compete at the World Cup in 2019, and more importantly one that can cope with a spate of injuries to key players as we did in 2015.  So I can see why the priority would be to get the youngsters used to our systems and methods, and not only could it be seen in the youngsters in Georgia, it was also apparent against the US Eagles.

Joey Carbery did not have a good day at the office by any stretch, and this mostly was due to not one, but two blocked clearances from inside his own 22 which led to tries, neither of which were really “on”.  Still, I’m not sure if this was all down to his making a poor read of the defence in front of him, perhaps it also had to do with pre-defined plan to practise this method of “exit”.  As well as the two blocks, he did it on his first touch of the ball (also slightly blocked) as well as later in the first half (when it actually worked and almost led to a score).

And that wasn’t the only area where we seemed to be going through pre-determined motions...Devin Toner’s lineout calls looked as though they were being taken off a shopping list (at least the early ones since we had as many as 21 altogether) - again, not a bad thing in a match like this one.  Also when the US had the ball we didn’t seem too keen to commit numbers to the breakdown even when the ball looked contestable after the tackle.  I guess what I’m trying to say is that we played this match like it was a glorified training drill at times.

But you certainly can’t take anything away from nine tries, can you?  Meh...maybe I can a bit, sorry.

For the most part our scores came not so much from creativity rather than exploitation of fundamental system errors in the home defence.  Don’t get me wrong...there was some superb execution once the space was found, not least of which was man-of-the-match Keith Earls’ sublime pass on the run to Stockdale for try number 2, but the rugby nerd in me can’t ignore what led to those chances in the first place.

It wasn’t just in open play where there were errors to may hay from either...one try came off a maul the Amercians just could not defend, another was off a scrum charging over the line, another when nobody bothered to be a “pillar” at the breakdown.  Again, I love it when Ireland score but in all fairness if we want them to reach a World Cup semifinal one day then we absolutely should be making the most of basic lapses like those.  And we did, so that is still a good thing.

And let me be clear - the home side weren’t exactly hopeless.  They have a big picture of their own to consider, namely a World Cup qualifying series between themselves and their “old enemy” Canada in a couple of weeks.  So this was something of an experimental lineup for them too, and it wasn’t without some good displays.  AJ McGinty got his back line moving well at times especially for the third try, Mike Te’o looked dangerous on the wing and Taufete’e did well off the bench.

Which brings me nicely to the the individual Irish displays.  Basically our squad could be broken up into three categories…”Rookie”, “Intermediate” and “Senior”.

From the new batch of players, I thought Rory Scannell was the most impressive on the day albeit from the bench.  His perfectly-weighted crossfield kick led to the last of the nine tries, and he was a steadier presence at outhalf overall than Carbery before him.  There were a couple of scores for the newbies - Jacob Stockdale looks very much like a Joe Schmidt style of winger and took his score well then there was James Ryan scoring with his first touch.  Both have Keith Earls to thank for their scores, however.

The amazing thing about the “intermediate” group is that it’s hard to believe many of them aren’t still rookies...Carbery, van der Flier, Ringrose, Niall Scannell, Luke McGrath.  Maybe they didn’t all have their best outings on the day, Joey in particular, but overall it’s good that we have so many gaining test experience.  A couple more like Marmion and O’Halloran aren’t too far off elevating to the final category and they made the most of chances when they had them.

Finally in the senior ranks Rhys Ruddock led the line well, Devin Toner and Cian Healy quietly but solidly got on with their work but this match belonged to Keith Earls plain and simple.  When good things happened, he was involved.  As well as that pass for try number two I really liked his fancy footwork on the touchline when getting his own second score.

But that’s about as much as you can write about this match...time to move on to the Land of the Rising Sun.  Not only does Joe get to bring a squad of youngsters abroad, they also get a taste of what it will be like travelling to the same destination in 2019.

Ideally I’d hope to see more of “one-off test” approach over the next couple of matches, but that’s just a grumpy blogger being nit-picky. Two more wins with a bit more game time for the next generation of Irish stars would actually be fine.  JLP
at June 12, 2017