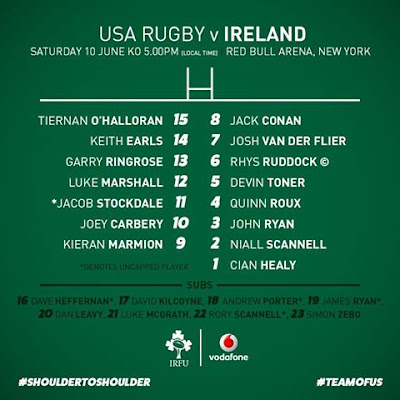 If you read this site often you'll know I’m always harping on the game of rugby growing beyond the “traditional test” nations to  different parts of the world.

There is, however, a slight drawback to that desire.  If the game continues to get more popular in big TV markets like the USA and Japan (ie exactly where we’re travelling on this tour) then there could be no limit to how far up the rankings their test teams can go over time, with us poised to be one of the nations they pass on the way!

But that’s a long way off...this tour, for me anyway, is far more compelling than what is going on in New Zealand right now.  It’s an opportunity to give top test experience to a host of up and coming youngsters, and Joe Schmidt has certainly reflected that in this lineup.

Starting at outhalf in Joey Carbery, who has had one hell of a year despite the May disappointments at Leinster.  I fully expect he and Kieran Marmion to keep a healthy pace going throughout this contest.

Outside them in the backline there’s the classic “mix of youth and experience” and it even represents all four provinces into the bargain.  I’ll be keen to see how the Ulster lads get on here...Luke Marshall because his ability deserves a decent injury-free run in the side even if only when Robbie Henshaw is away, and Jacob Stockdale because he was one of the better parts of a disappointing season for his province.

Rhys Ruddock is tour captain and rightly so - I rarely see him having a bad outing and he was captaining Leinster pretty much straight out of the academy.  He’ll be well used to his fellow back rowers van der Flier and Conan with Dan Leavy ready to spring from the bench...there can be few excuses for us not gaining advantage at the breakdown.

Devin Toner is one I want to see do well on this tour; 2017 has not gone well for him so far.  I remember the last time we went stateside (he wasn't on top of his game at the time then either) we were struggling at lineouts and the American commentator said : “Why don’t they just throw it to the tall guy?”  Now he’s calling the shots we should be well in control of this setpiece by now.

Then there’s James Ryan, who looks to join the likes of Michael Bent in getting an Irish cap before he gets a Leinster one.  Big things expected from this guy...many seem to think we’ll need to wait for him to get a bit older before his true ability shows, but that doesn’t seem to be holding Joe back from selecting him now.

What do I know about the USA side?  Eh - they’ve AJ McGinty who played for Connacht at one stage, that’s one thing, and….ok, ok, that’s the only thing I’ll admit it.

The bare minimum target for this tour is three wins.  I won’t mind so much if this team doesn’t get the 22 point margin predicted by the bookies against the USA, in fact my prediction is for something more like 15 to 17.  But overall we want to say with confidence that the systems are operating well and that the next generation looks ready to step up.

Hopefully that’s not too much to ask!  JLP