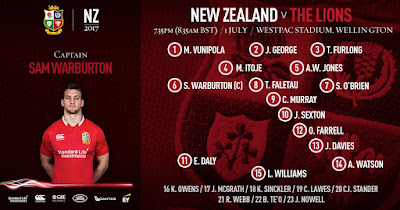 So the loss in Auckland was the fault of Peter O'Mahony and Ben Te'o, right?  Well, what other message could Gatland's changes possibly send?

Forgive me for not "toeing the party line" after all the reports from his press conferences ahead of this second test.  "We were destroyed at the breakdown" he says.  "We need a poacher like Warburton in there" he says (both paraphrased).

Well I ain't buyin' what he's sellin'.  You need a poacher and your tour skipper isn't fully fit?  Why not play Tipuric?  Or Rory Best at hooker?  There were other roads he could have travelled for that first test.

Now I've said all along I have nothing whatsoever against Sam Warburton...it's more about the over-hype surrounding him.  To back up these claims about his value to the team, he now needs the game of his life on Saturday.  Man of the match performance, Lions win, mostly down to him.  We'll see...and just in case there's any doubt, I'll be delighted if that happens!!!

Much like I believe the Lions would have comfortably won the third test in Sydney back in 2013 regardless of who wore 13, I also say we would have lost last Saturday regardless of who was wearing any red number.  That's because we would have played the same brand of rugby, and it would not have been enough.  It wasn't about poaching the ball when the All Blacks had it...it was about when WE had it, particularly those final 5 to 10 metres before the try line.

What the Lions need are solutions, not scapegoats.  Despite some positive displays & results for the tourists, the All Blacks' "hive mind" has both prepared for and adapted to Gatland's brand as this tour has progressed...and if we don't think outside the box even just a little, the margins are just going to get wider IMO.

Now to be fair to Warren's Wanderers, throwing Sexton in at 10 does represent a shift in thinking.  Gone might be the crashing runs down the 12 channel that Te'o brings, but now we have two "five eighths" that can really mix things up on the attacking front and what's more we shouldn't lose a whole lot on the defensive side of things.

It will come down to the decisions we make when the chances are there.  As always, I don't see the point of naming All Black players in previews...they're gonna do what they're gonna do.  Just like last week, I think they can be beaten, but I also think they won't, at least not this week.

Nor is there any point in saying too much about the ref, though on my point earlier about what Warburton brings to the breakdown, we must not forget that we have a northern hemisphere mindset in charge of the whistle this time, so we'll need to keep an eye on how that goes.  Should we break into their 22 only to be halted by a penalty more than once, I might just switch off altogether if we don't see cards.

The bookies have a home win by 13.  I'm going to suggest the Lions do one of those things I hate most in sport - "lose with dignity".  We'll keep the margin in single digits (just) to lose the series yet still keep interest levels above water for the final test.

Of course I'll be cheering the lads on and wearing my jersey, but I'd be lying (lion?) if I said I'm not getting more concerned about Irish players suffering long term injuries than I am the success of the tour as the weeks go on.  JLP