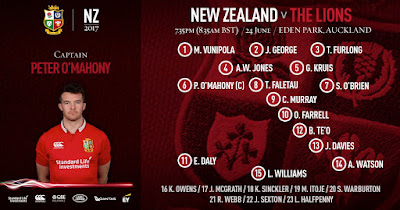 My base level of expectation for this test series is three defeats with one close, one not so close, and one rout.  That comes more from realism than it does from pessimism.  But that's not to say that I  believe Warren's Wanderers are incapable of proving me wrong.

Despite the fact that the series is "best of three", if we are to have a hope of winning two, we will almost definitely have to win the first.  Sure, that's a lot of added pressure on the boys in red but it is surely no more than they expected travelling to the home of the World Champions.

I say no different of the Lions facing the All Blacks than I do Ireland.  This is what I had to say ahead of that historic test in Chicago...

The All Blacks are going to do what they do.  We have to leave them worry about that - I’m not going to mention even one of their players in this preview.  One thing I will be looking for more than anything else from Ireland on Saturday will be readiness.  It’s pretty much Joe’s trademark.  Here’s the plan lads...go out there and execute it and you’ll have every chance.

Joe Schmidt and Warren Gatland might be different types of coaches when it comes to their approach, but one thing they have in common is an ability to get their players applying that approach to a man.  Maybe the 2013 tour success was in many ways down to the Wallabies' failures, but it's hard to argue the Lions were tuned in to their task by the final test as well.

And the way this tour has gone, maybe results haven't all been what we wanted (not to mention things happening to leave us questioning the validity of the tour itself)  but as the matches have progressed there has definitely been an upward curve in the performances, leading to a matchday 23 that seems perfectly capable of mounting a challenge.

Leading the way is Peter O'Mahony.  I'm absolutely delighted for him and here's hoping he can establish a working relationship with Jaco Peyper as he's going to need it.  Breakdown interpretation, particularly from a north/south hemisphere angle, is forever a key to these contests.

He and his fellow back rowers O'Brien (also delighted to see him start a first test...he should have done in Australia too) must establish early what they can and cannot do to contest the ball, as well as demanding consistency in decisions.  I can totally see the tourists being primed and ready for kickoff but all it tkes is one or two dodgy decisions breaking our momentum and the wheels could come off rather quickly.

Now I am willing to break my "don't mention any All Blacks" rule for one player, and to be fair he didn't feature in Chicago.   Steve Hansen's men are not only All Blacks but also All Stars...pretty much every player at every position could walk on to any team on the planet.  But Sonny Bill is somehow an even more unique proposition, and it is in his channel where we will see the true wisdom in the selection Ben Te'o.

Let me put it this way...if Ben does well over the next four weeks, it could mean certain doom foe the test career of George Ford.  And although I mooted an "outside the box" call for Sexton in the 12 role in an earlier writeup, I still think Te'o can shine in these tests.

And his channel will be a central part of that on which we will most rely...our defence.  The line speed will have to be quick because you can be sure every millimetre of space will be used by the hosts to the fullest.

Plus, I know this should go without saying in every match, but it is essential that we keep our own house in order at set pieces - and included in these are Conor Murray's box kicks - they need all their usual accuracy with all their expected chasing.

Do I think the Lions can win?  Yes.  Do I think we will?  No.  Do I think we'll beat the bookies' spread of 10 points?  Yes, I'm going for us to give them a scare and fall short by 6-8 points.  Have I finished asking myself questions?  For now, yes.

Here's to an excellent spectacle.  Even though I see the Lions concept as one on the wane, when the whistle blows for kickoff all of that is forgotten.   JLP

Click here to read the excellent series of blogs by Michelle Tobin who is down in New Zealand herself for the entire tour.