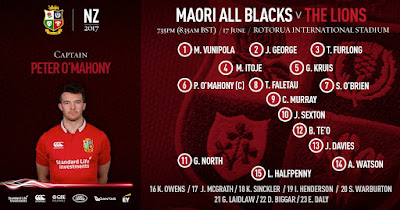 I have to admit I wasn't all too keen on Peter O'Mahony as any kind of rugby captain when he was first handed the role back in the day.

That in no way meant I didn't want him in any Irish team - he's pretty much undroppable in the way he imposes himself on matches, but it's that very "passion" that made me think he may not be the right man to forge a relationship with referees.

As time has gone on however he seems to have found a way to channel his aggression to where it's needed most while staying focused on the game enough to do a skipper's most important work, and I'm delighted to see he'll be taking the Lion mascot out to the field in Rotorua on Saturday.

The back row he plays in against the Maori All Blacks could easily start the test series for me.  I have harped many times about how I don't see any room for Sam Warburton in the 23 let alone the 15, and it will be interesting to see what kind of performance this trio have under their belt by the time the tour captain emerges from the bench.

Next in line for scrutiny on Saturday has to be Johnny Sexton at out half.  With Owen Farrell now having fitness doubts, the spotlight now falls heavily on the Leinster man to show what he can do - as always, he'll need to find a balance between his desire to play with his own full-throated aggression and his need to be able to stay on the pitch.  Having Murray alongside him definitely won't hurt his cause (once he doesn't try to run by him at pace!!!).

Outside him is a centre pairing which I suspect Warren Gatland might well favour for the test series, and if the defensive line remains as solid as it was against the Crusaders, it could well be nailed down.

In the pack I'm starting to think Jamie George could well be playing his way to a test start ahead of Best and Owens.  Mako Vunipola and Tadhg Furlong make for a decent front row overall too...I wonder how many had those three in mind when they mooted Lions teams a year or so ago?

From the Maori lineup there are a host of names that stand out.  Leinster fans will be keeping tabs of James Lowe at full back who will be joining us next season, but the likes of Milner-Skudder, Kerr-Barlow and Liam Messam are all well able to do some damage, and I see Ihaia West is on the bench looking to repeat his recent match-winning score for the Blues.

The bookies say the visitors should win by about five points.  I think we'll squeak it but by about 2 to 4 points.  We'll need every bit of our defensive effort from Christchurch and then some, only with tries of our own as well.  Here's hoping the Murray/Sexton show can shine.  JLP