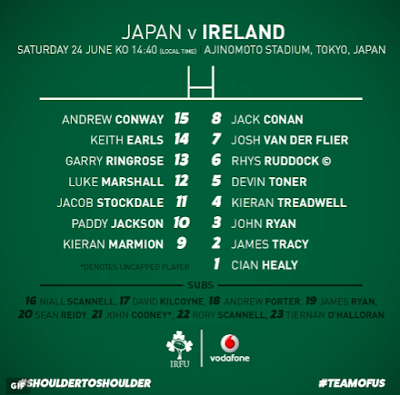 A target could not be easier to come up for this final Irish test of the European rugby calendar...go out and win with at least another fifty points.

Yes, I know this is a Joe Schmidt team, which means there are way, way more goals than that.  He is more than most coaches heavily focused on systems and everyone fulfilling their roles to a T so they will also be under scrutiny whatever the result.

But having posted "fifty-burgers" in each of our first two matches on this tour, anything less than that could leave the lads open to accusations of having half an eye on their "holiers", and let's just say that if I were their coach I would use this pride in professional dedication as a motivational tool.

It's a another version of the same kind of line up we have seen on this tour, a few regulars throughout like skipper Rhys Ruddock, top performers Keith Earls and Jack Conan, and Garry Ringrose, with some key tweaks as well, like a first start for Kieran Treadwell and the potential for a first cap for the Ulster-bound John Cooney.

At fullback I see Joe has gone for Andrew Conway.  One thought I had watching last week's match that I forgot to mention in the writeup was that perhaps Zebo at 15 and Conway on the wing should have swapped positions.  For some reason the coaches appear to have Zebo locked down as primary alternative to Rob Kearney, assuming the Leinster man is still the front runner for the role, of course.

If we are to assume that he still wants his "Henshayne" pairing of two converted fullbacks at centre in his ideal lineup, then maybe Conway can be seen as a more ideally suited candidate for full back?  Either way, this is a perfect chance for him to show what he can do - and we can't forget Tiernan O'Halloran in that mix either.  Remember, I've nothing against Zebo at all, I just thing he's better suited on the wing.

Despite my Leinster leanings I must say I feel for Dave Kilcoyne for not getting a start in three matches.  Sure, Cian Healy is the more senior player and probably thought four years ago he would be in New Zealand this summer, but the Munster man has always given 110% for jerseys both red and green and putting on the 17 jumper three weeks straight might grate a bit.

One position where there has been rotation is scrum half - Luke McGrath did well last week but it is clear that Kieran Marmion is seen as first in line to back up Conor Murray and for now, we can have no complaints.

Hopefully the "Brave Blossoms" will put up more resistance than last week but if Ireland can settle quickly I see no reason why we can't post a similar score and margin.  The bookies have us winning by 25 - I'm going to add to the pressure I'm exerting with the 50-scoring target and say I think we should win by at least thirty.  Will I go even further and say I want a minimum of eight tries to beat last weekend's seven?  You know what, I may just.

Leave us Irish fans smiling as we change the channel to the first test in Auckland, just in case that has our mood heading in the other direction!  JLP