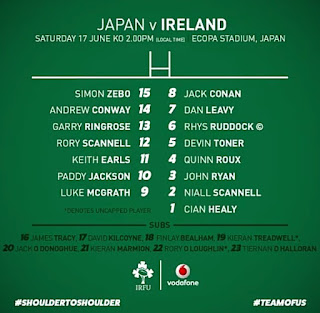 Imagine a completely hypothetical scenario if you will...

A test coach plans for a Rugby World Cup campaign for two years and although his team breezes through it's pool, those matches don't come without a rake of injuries to several key players so that when it comes to the quarterfinal, the next batch of players finds itself totally overrun.

Then that same coach commits to have another crack of the whip in 2019.  You'd have to assume in that case priority number one would be to do everything he could to make sure he had a much broader pool of players on which he could base his next campaign.

So if you had to pick an ideal location and set of circumstances for a summer tour, you couldn't do much worse than the venue for RWC2019 at the very same time a Lions Tour had deprived you of your top players.

Well guess what???  None of the above was hypothetical!  These two matches are invaluable for Ireland's chances when we eventually return to Japanese shores.

Once again we see a matchday 23 which features a mix of experience, youth and what I'd call "intermediate" players, all of which are key components to Joe Schmidt's plans looking ahead.  Just because this is far from the team we'd pick for a World Cup quarterfinal right now doesn't mean it isn't close to the one we'll end up putting out there when the time comes.

From this matchday 23 the name that stands out the most for me is that of Andrew Conway.  Hailed as a superstar in the making as he left school he found himself in a see of quality back three players at every level at Leinster and took the very brace step of heading down the N7 to improve his chances.

Maybe with my focus on the boys in blue, I haven't been able to see all of his performances but what I have seen is a steady progression towards the season just gone where he has absolutely earned his starting role in this fixture and with a couple of good performances very well could cement a regular spot in Schmidt's ideal RWC squad...he's definitely a "Joe" kind of player.

Next I'll be keeping an eye on Luke McGrath at scrum-half...though Kieran Marmion had a good showing last week, the Leinster man wasn't too shabby as a replacement and these two look as though they are heading for a regular tussle to be Murray's more reliable backup.

In the pack as always I'll want to see the usual things we look for like steady set pieces, strong breakdown work and solid carrying - this definitely seems to be a lineup to get that done.   Once again there's an all-Leinster starting backrow that will be keen to put itself about.

Finally on the bench there's another new cap at the ready, namely Ulster's Kieran Treadwell who should add further to our ever-growing stock of locks.  And with Carbery out with injury, I have to assume Rory Scannell is slated to cover for Paddy Jackson which allows for two back three players in reserve - both O'Loughlin and O'Halloran could may a lot of hay should any late broken play chances present themselves.

The bookies have us winning by 14.  I want to put pressure on the squad for this tour and I'm hoping they can beat that.  I can't say I know a whole lot about our hosts but I'd want this Irish group to target a margin like 18-20.

For those getting up to watch this live on d'telly - see you on Twitter around kickoff time...bring the coffee!!! JLP