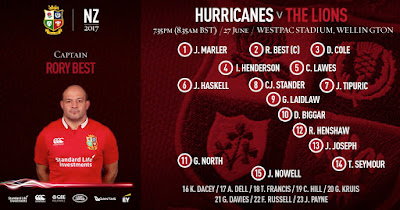 Just go out and enjoy your rugby, lads.

That's the very simple message I'd relay to the Lions matchday 23 if I could.  With the possible exception of the likes of North and Joseph, barring injuries in the full test side I doubt any of these will feature on this tour again after Tuesday's match in "The Cake Tin".

It's a good starting XV, of that there is no doubt, and it's a good opportunity for Best, Henderson, Stander and Henshaw to get more minutes under their belt.  I'll be hoping Jared Payne gets on for a half-hour shift with his fellow Irish centre but besides that, I have absolutely no expectations for this match.

(UPDATE TUESDAY 7:30am - Leigh Halfpenny is a late replacement for Jared Payne)

We're going with an aggressive pack that should be strong around the breakdown area, though it will of course be vital that we keep on top of our set pieces which have been shaky at times for the midweek side.

The home side are of course reigning Super Rugby champions and although they are missing their full test players, there's plenty of talent on show in their lineup.  Once again we see the incredible depth in Kiwi talent as they can have a back three of Jordie Barrett, Nehe Milner-Skudder & Julian Savea just days after a full test match.  Unreal.

I'm thinking the scores should remain relatively low for about 50-60 minutes but unless the tourists can manage to build up any kind of lead in that time, the home side could pull away in the closing stages.  Bookies have the Lions by three, I'm going the other way, a home win by 3-5pts.

Hopefully the match will entertain even if the result isn't to the liking of Lions fans.  JLP