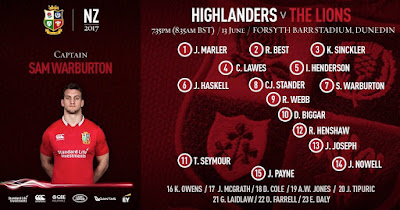 My personal hope for this match is simple...same again from Saturday would suit me just fine.

Yes, yes, I know the Lions weren't great when it came to try-scoring and that needs to improve before the test series kicks off, but I'd be willing to overlook a similar 5-pointer drought if this "midweek" team can show the same skill levels without the ball as we saw in Christchurch.

This would mean the coaching staff have been able in just a couple of weeks to instil a solid defensive base throughout the squad and for me that's a perfect platform to mount a challenge against the best team in the world.  From there we'll need to hope there's enough creative skill around the squad to break down the All Blacks!

I have a feeling the expectations will be a little higher for Warren Gatland.  First and foremost will be a desire to prove Sam Warburton's fitness.  The tour skipper has given interviews saying he might not be right for the tests.  Personally I think there are better opensides in the squad than he (like Justin Tipuric on the bench for this match) but having said that, you want your coach to have the personnel he actually wants on pitch.  We'll see how he gets on.

Of the Irish contingent there's two Leinster players in this 23 - we could see more of Robbie Henshaw's attacking prowess with Joseph outside him.  Meanwhile Jack McGrath is on the bench - he could do with a good shift as I reckon Mako had a decent outing against the Crusaders.

Elsewhere there's three from Ulster starting in Payne, Best and Henderson...of the three I'd say Rory has the most chance of seeing full test action.  Meanwhile CJ Stander has a great chance to make a mark here though he is likely to be behind in the pecking order to Toby Faletau at the moment.

The bookies have the tourists winning by 5.  For once I'm going to concur, though as I said it will probably take a strong defensive effort to stay ahead of the Dunedin-based franchise.  JLP

PS - don't forget the injury-plagued Irish Under 20s, aka the "Wolfpuppies", have a big playoff match against Samoa on Tuesday as well, kicking off around 10am Irish time.  They need to win at least one of their final two matches to be sure to stay in the top tier of this tournament for next year.