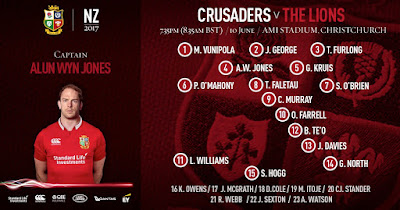 If this Lions Tour is going to “take off” or “get going” or whatever terminology you think works best, this match is the time for it to happen, especially since I reckon Warren has picked something close to his ideal test matchday 23.

Just like the previous two matches, it is very easy to look at this lineup and explain how it gives us a great chance of winning...the only factor missing though is a big one...have they finally recovered from the trip and do they feel more comfortable playing together?  Those are the answers we need from this performance more than any other.

As always my thoughts are mostly on the Irish contingent...like I said in my Blues writeup I was impressed with Rhys Webb so Conor Murray could do with a good outing to show why he’s pretty much everyone’s frontrunner for the tests.

But it would seem Ireland’s best chances for facing the All Blacks come in the pack...what a rise to fame it would be for Tadhg Furlong if he makes it and I see no reason why he can’t.  Then there’s O’Mahony and O’Brien in the backrow...the latter will no doubt be a step or two behind when it comes to fitness level but neither are slouches on the aggression front.

And on the subject of aggression, they’re going to need it.  These Crusaders have won a host of Super Rugby titles, they have won 14 out of 14 this season, and they have a host of test caps in their ranks from Moody at 1 all the way to Dagg at 15.  It’s not hard to see why some are calling this the “fourth test”.

On the bench there’s McGrath, Stander and Sexton, all of whom are likely to stay in those roles when the tests come around.  One sub who could well play his way up the pecking order is Anthony Watson - I thought he was one of our few positives in match one.

The bookies have another defeat for the tourists, this time by three points.  I’m going to go with my head this time and say the margin will be a bit longer, between 5 and 7.  But as I have said, this team of Lions, or indeed any combination of the squad Gatland has at his disposal for that matter, is capable of getting a result and yes, I even mean against the All Blacks.  It’s just a matter of how they can form a cohesive unit on matchday.  JLP