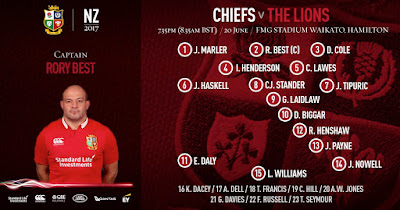 Being captain of the midweek team is historically something of a consolation prize on these tours.  Sure, we fully respect your contribution to the game back home, but sadly we don't have room for you in the full test team, at least not as starter.
Hopefully I'm wrong about Rory Best but it does look as though Gatland is going to opt for Jamie George to start the first test - he would definitely be more "about the ball-carrying" than Best and thus better suited for "Warrenball" so I hope the Irish skipper can at least make the bench if that's the case.

Despite my mini-rant on the increasing pointlessness of these tours in my writeup of the Maori All Blacks match, I'm pretty much on board for the test series.  Can't say the same about these ones though, and whatever your take on the callups they don't really inspire you to take the match too seriously.

That won't stop me following the progress of the Irish players in particular, though...the "Henshayne" pairing is reunited in midfield so I'd expect the home side to have a hard time breaking through the Lions D.

In the pack as well as Best from the Irish contingent there's CJ Stander and Iain Henderson and no doubt they will be expected to do much of the heavy lifting.  I'll be disappointed if at least one doesn't cross the try line at some point.

When it comes to the hosts...just how pissed off about losing on Saturday do you think Liam Messam is that he's suiting up to have another crack at the tourists a few days later?  And Stephen Donald...he's still playing?  Guess so....and this is his ten millionth cap or something so there's a lot at stake for the Chiefs, which is why I think they're going to win.

The bookies have the tourists by seven...while the Lions starting fifteen makes for impressive reading, I'm not convinced they will gel together well as a unit, at least enough to stay ahead of the hosts.  I think it will be tight with the Lions leading until late when a try from the home bench, possibly Messam, will pinch it for the Waikato based province by a couple of points.   As always when I make forecasts like this, I will be delighted to be wrong!  JLP